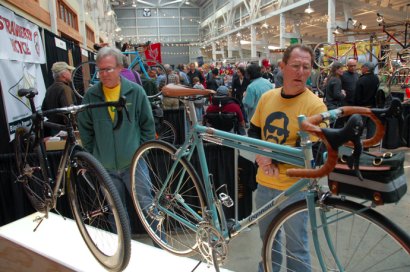 The bicycle industry is alive and well in Oregon. That’s the message over 2,000 people and nearly 40 vendors got when they walked through the doors of the Oregon Handmade Bicycle Show this weekend.

“This show has been phenomenal. I’ve talked to people from [Washington] D.C., St. Louis, Seattle… They said they flew in just for this event.”
— Emile Lemoine, Cycle Works Oregon

Emile Lemoine from Cycle Works Oregon displayed his Beloved Cycles near the entrance to the event. As a long line of people filed into the venue on Sunday he said, “This show has been phenomenal. I’ve talked to people from [Washington] D.C., St. Louis, Seattle… They said they flew in just for this event.” 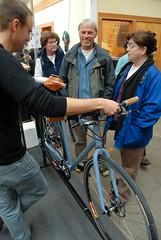 Co-Motion got a lot of
attention for their souped-up
Americano.

The public aren’t the only ones noticing the bike building boom that’s going on in Seattle, Portland, Eugene, and other cities throughout the Northwest. The bike industry’s largest players have also taken note. Electra’s ambitious new Ticino line draws directly from bikes their product managers saw at the 2008 North American Handmade Bicycle Show held in Portland. And Trek’s new also looks a lot like the bikes small builders have been creating for years. Asked about what it means to have these major players copy the aesthetic and design of custom builders, Lemoine said “It’s a validation of the movement.”

The Oregon Bicycle Constructors Association, who organized this weekend’s show, have helped to spur a collaborative spirit among builders that helps all of them succeed. Builders have also benefited from a host of exhibition opportunities this year — like the Oregon Manifest — which has kept the industry in the media and in the public eye.

Eugene-based Co-Motion Cycles is one of Oregon’s largest and most well-established bike manufacturing companies. They displayed a flat-bar version of their popular Americano model with a drivetrain that included a belt-drive and 14-speed Rohloff internal hub (they expect the bike to be available by March). 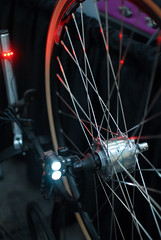 Frames aren’t the only thing being made in Oregon. Brian Engelen from Light On! Lights debuted an exciting new addition to his Dynolight range — a compact, powerful rear light that offers 180-degree visibility and runs off the same front hub that powers his super-bright headlight. Engelen builds the lights in his shop in Beaverton and says he’s “scrambling” to keep up with orders.

Another local manufacturer that’s working overtime to keep up with demand is Ken Wheeler and his crew at Renovo Hardwood Bicycles. Wheeler said he’s been “flabbergasted” at the response to his bikes and that he can’t keep up with demand. 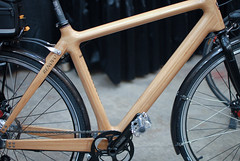 Renovo’s “Panda” commuter bike
is made from bamboo.

Wheeler said his Panda bamboo commuter bike “is really taking off”. “We wanted to have a mountain bike model out by now, but we can’t catch up with what we already have.” The interest doesn’t look to be subsiding any time soon for Renovo — Wheeler said he’s got major publicity in the works from Vanity Fair and ID Magazine.

Bike shows are important because they give new builders a chance to introduce themselves. Love Machine Cycles opened up just a few months ago. Builder Joseph Bard has a background in large-scale kinetic sculptures and the highlight of his booth was an aqua-marine mixte with a heart on the head tube badge. 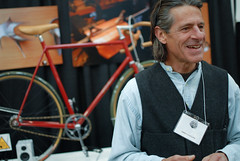 This show was also a re-introduction for one of Oregon’s most legendary bike builders — Mark Dinucci. Dinucci is “the builder’s builder”, a sought-after bike designer who went to work for Specialized in the 1990s. After that, he worked for Portland-based Sapa Profiles, where he designed bikes for Santa Cruz, Ellsworth, and many others.

“I’ve had my nose buried in a computer for too long”.
— Mark Dinucci

Dinucci is the man who would take the ideas of product managers and designers, put them into a workable form via CAD drawings, then travel to factories in Asia and turn them into reality. He’s behind the scenes, but his work can be seen on some of the most popular bike designs on the market today.

On Sunday, he was like a kid again, and seemed to be enjoying his rekindled relationship with bike building. “I’ve had my nose buried in a computer for too long”. One of the two bikes he displayed Sunday was a stunning road bike he made on SE Division Street 25 years ago.

Dinucci’s not sure exactly what shape his business will take. At this point, he just knows he wants to build bikes again. But, he adds, “I don’t want to make just anything somebody wants”.

With his decades of experience to draw from, Dinucci wants to build bikes his way. On display Sunday was a drop-dead gorgeous bike that from afar didn’t look like much: But up close, it was extraordinary. The bike featured a custom lugset (made by Dinucci during his stint with Specialized in the ’90s), a proprietary tubeset (also created by Dinucci), and a Dinucci-made bottom bracket shell. The bike also had a nifty front flash-light mounted on the fork (imported from Japan) and a custom chainring which was designed by Dinucci’s friend Bryant Bainbridge and made in England. 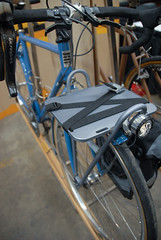 Across from Dinucci, relative newcomer Rob Tsunehiro of Tsuneshiro Cycles showed off his latest creations. Tsunehiro worked as an airplane parts design engineer at Boeing before he started building bikes. On Sunday, his new front rack caught my eye. It’s aluminum and features a solid, CNC’d top plate with rails below it to hold pannier bags.

Joseph Ahearne is far from a newcomer. Ahearne came onto the scene in 2004 and has been honing his niche under the Ahearne Cycles banner ever since. His flask holster was a breakout product. It put him on the map and earned him national attention. Now he’s got another product that I think could very well do the same.

On Sunday, Ahearne debuted a prototype cargo bike. Based on a regular rear end, the bike has a 20-inch front wheel that sits under a large front rack. The wheel turns independently of the rack and the result is a compact, sturdy steed that can easily handle loads of 80-100 pounds. 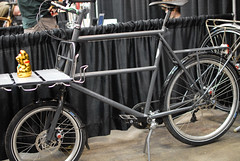 “This is the cargo bike Portland needs”. Ahearne says he’s excited about the bike because it’s easier to maneuver than the other, larger cargo bikes on the market and because “it still rides like a regular bike”. He has plans to do them on a production scale and he’s working on a child seat attachment system for the front rack. Stay tuned, this bike could be a game-changer.

Other highlights from the show were a new cyclocross chain guide made by Courage Bicycle Mfg. and the debut of a cyclocross model (and soon a mixte!) in the Cielo (Chris King) line.

For more, check out the slideshow below (or browse photos in the gallery):

Once again, old is new again.

Though hopefully they can do a bit better on the production, which is certainly an HPM issue.

Thanks a lot, Love Machine Cycles guy, now I have this stuck in my head: http://www.youtube.com/watch?v=-E9P_2_Fx3Y

Shane (1)- I spoke with Joseph Ahearne about the cargo bike he had on display. He said he almost didn’t bring it because he doesn’t plan on marketing the bike. It was something he built for himself and rode it to the show. Maybe if there was enough interest he might consider it? I can’t speak for him on that.

Mitch @ MAP Cycles is still the most talented builder of Portlands coolest bikes. All of his bikes at the show were beautiful!

Way too much chain. Not enough kevlar.

It’s amazing that we’re finally starting to see more of these bikes equipped with road disc brakes (Avid BB7 and others). In Portland you think this would be mandatory given the weather…

not to undermine any bike builder’s efforts, but everything i saw at the show looked like every bike made in europe for the last 100 years (with a few exceptions), with the addition of disc brakes and lightweight components. a mixte, wow, a bike with a chainguard, stop the presses!

it’s just funny how the new trend is to design boutique bikes in the same style many european bikes have been using for ever. i imagine this trend is a reaction to the fact that american bikes have only come in two flavors the last 25 years, mountain bike or racing bike. that being said, i guess you can only re-invent the bike so many times.

trend or not, i think the most exciting thing is that all these bikes WERE NOT made in Europe.. they were made right here in our backyard.

If only they were more attainable. Why do all good things have to be so darn expensive?

The Ahearne prototype cargo bike is very similar to a 100 year old european model. The thing is, the european manufacturer stopped developing the model, so it’s made more or less the same way, as it was in the fifties. It’s not as good a bike as it was then (relatively speaking).
If you want to see the old one, google images for a “short john”.

Having tried one, though, I will say that you can ride fast or slow with no problems, even if you have a 280-pound lardass sitting on the front. It just makes braking … interesting.
Seriously though, having the cargo rack attached to the frame makes a huge difference. You got to try that, before you believe it. Also, the bike is not very much heavier than a normal bike, most part can use standard components. It is one of the ideal places for a rack, and better than having it over the rear wheel.