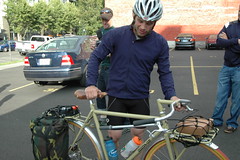 All day yesterday, the thirty offerings in the Oregon Manifest Constructors Challenge were judged. Today, they were put through their paces on a 77 mile course, from Vernonia to Portland via some epic hills, gravel roads, and city traffic.

The winners are in, and fifteen prizes were awarded — the top three finishers in the race, and the top twelve frame builders on the merits of their submitted design. 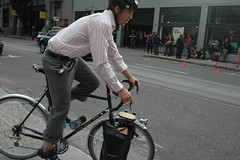 Andy for Signal Cycles, all dressed up
and headed to the finish line

For the race (by total race time — the departures were staggered):

3. Dan Boxer racing for (and builder of) Boxer Cycles in Seattle — 5 hours 21 minutes (he was first across the finish, making a splash with bloody knuckles and handlebars)

1. Mike Kath racing for Sprout Cycles of Portland came in at 4 hours, 56 minutes.

And the design winners were: 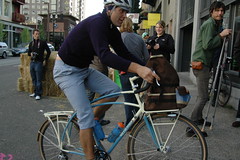 12. Donkelope Bikes : Bellingham, Washington
– One of the more distinctive frames in its overall shape

9. Hufnagel Cycles : Portland,
Oregon
– “Where’s your front rack?” yelled someone in the crowd — it had been taken off during the race after it came loose on the bumpy gravel 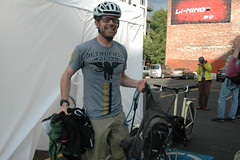 8. Rex Cycles : Sacramento, California
— Josh Simmonds, the impossibly tall rider of the Goodrich bike, hoisted this high above the crowd for Steve Rex, who had broken his collarbone during the race.

7. Metrofiets : Portland, Oregon
– It took three people to hoist the only cargo bike in the competition (they then tossed it into the air a few inches)

6. DiNucci Cycles : Sisters, Oregon
– DiNucci did not show up for the race today, and was nowhere in sight when his name was called. His mom, Doris, jumped up on stage instead. “Where are you, Mark?” she demanded into the microphone. “Mark DiNucci, I didn’t raise you to be a quitter!” 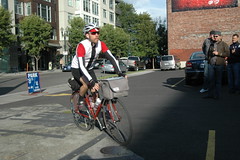 3. Vertigo Cycles : Portland, Oregon
– The judges were particularly impressed by the details on this bike, including what one called “the best execution I’ve ever seen” of a split for installing a belt drive.

1. Pereira Cycles : Portland, Oregon
– The crowd saw this one coming a mile away, and you could barely hear the judge call Tony’s name.

A big congratulations to all the winners — and to all the builders and racers. It was tremendously exciting to be there — and to see the energy from these builders from all over the country all in one room.

We’ll be bringing you more coverage from today. In the meantime, check out our photo gallery from the finish line (with many more photos, including some from the course, coming soon).

And Sean Chaney! I didn’t even know that bridge had a split in it. Top notch is the only kind of work that rolls out of the Vertigo shop!

And big thanks to all the people who spent all their time and energy to make this happen. A truly unique event in this era of bike-show-of-the-minute.

the pride of salt lake is still inspiring wonderful and crazy innovations back home: http://saltacetylene.blogspot.com/

My dream bike? Foldable into a bag or large suitcase, kelvar belt drive, and internal CVT or similar.

It’s gotta be mentioned that

“the best execution I’ve ever seen” of a split for installing a belt drive.

is the design of another Portland titanium frame builder, Dave Levy at Ti Cycles. It first appeared on my bike which I’ve been riding for over a year.

Gotta give credit where it’s due. Dave found out his design had been “licensed” at the judging on Friday. He didn’t seem to mind, and is in fact friends with Sean at Vertigo, but since it was noted as a significant part of the reason for the award, it bears mentioning.

One other detail of interest that’s been overlooked was Igleheart’s use of Sturmey Archer’s new 3-speed fixed gear hub. Neat-o.

I still remember Tony’s bike from the 2008 NAHBS. He’s got he knack.

I also zoned in on that S-A fixie 3 speed. It could of used a custom pulley instead of the standard S-A pulley.

It’s absolutely true that I borrowed the split design from Dave and I gave him full credit when I spoke with the judges. I feel that it’s also important to mention that I asked Dave’s permission way back at the little OBCA bike show before during bridge pedal registration a few years ago.

Thanks to everyone involved with the show, I had a blast. Tony’s bike was just amazing and it was obvious how much work he put into it. The ride was incredible and incredibly difficult (I didn’t finish) and all bike entries were gorgeous.

All of the bikes were absolutely beautiful, but I give serious props to Ahearne for entering a step through (and a step-through worth serious coveting at that). I’d love to see more well-thought-out and well-made step throughs and mixtes here in town.

“9. Hufnagel Cycles : Portland,
Oregon – “Where’s your front rack?” yelled someone in the crowd — it had been taken off during the race after it came loose on the bumpy gravel”

The idea that Hufnagel’s bike failure still warranted top ten is a pretty clear indication that the contest wasn’t about urban utility as they advertised. And how are we to know that these guys are any good if failures and mistakes are overlooked and hidden on a regular basis? If a bike builder is making junk, shouldn’t the consumer know about it?
And the fact that Denucci’s bike wasn’t even raced should have disqualified him. How do we know that bike wouldn’t have failed as well?

Unless it is not threaded properly.

Bike Fridays do that .. and working on a belt drive.