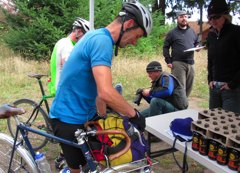 Pausing at the Rapha-sponsored
beer stop high atop Portland off of
Dixie Mountain Road.
(Photos by Mark Reber)

Saturday’s Constructor’s Design Challenge (part of the Oregon Manifest) race may have been for points and it was certainly tough, but the riders seemed to focus more on camaraderie than competition.

The day seemed to be an extension of the previous evening’s party, albeit without the DJ. The mood was light and joyful, the weather cooperated and there was excellent beer and food along the way.

Whether organizers at Oregon Manifest intended it or not, the day — from the first checkpoint where riders loaded a six-pack of Hopworks beer, to the lunch stop at Chris King’s home to the finish line — expanded what it means to have a biking culture and a bike community. The expectations of riders and visitors were exceeded and few could help but smile and laugh.

“Biking just seems like a great confluence of art and culture and athletics… Here, it seems like someone decides to have a bike event and the Peoples Revolutionary Guard comes out in support. It’s unique and exciting.”
— Winston Goodbody, spectator

With a bit of a late and staggered start, riders reached the first checkpoint, the Rapha beer pick-up tent, joyful in spite of a long and difficult climb over the gravel. No matter, the riders we spoke to felt like they had been given a gift of good weather, beautiful scenery and great fun at a 7% grade.

The Rapha tent was utilitarian, a sort of halfway oasis where volunteers like Dave Roth kept track of riders and times. When the racers reached the lunch stop, they were greeted by something more ambitious than the cue sheet’s understated “Food Pick-up Checkpoint” description.

If the Rapha stop was necessarily Spartan and business-like, the Chris King Precision Components checkpoint was a French country cycling picnic. Apple-cheeked children ran through the yard while racers pulled in to find a groaning board of delicious food and wine.

Erin Meschke reclined in the sun while her children darted back and forth, waiting for Nate Meschke’s Signal Cycles bike to arrive. 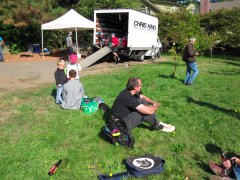 The gourmet lunch stop at Chris
King’s home on NW Germantown Rd.
provided a pastoral oasis for riders
and their fans.

“It’s really been fun,” Ms. Meschke said. “We came here to hang out, to ring bells and enjoy the day.”

According to Chris DiStefano, one of the sponsor’s representatives, the day couldn’t have gone better.

“We really wanted to turn this into something special,” he said, standing in front of tables covered in catering trays loaded with snacks for racers and visitors alike. “We want to build enthusiasm and create a real party atmosphere.”

Few could help but feel well treated as garlic sautéed shrimp sizzled under the direction of Robert McSpadden, chef at Chris King Precision Components and by the owner himself, Chris King. Soon, the racers began to arrive, led by Dan Boxer who went on to finish third.

Boxer called the course and conditions “excellent” in spite of the bloody, muddy arm and hand he acquired when he hit the gravel miles before.

“I’m gonna do my best to cross the finish line in one piece,” he said with a quick departure after revealing this was the first race he had ever entered. 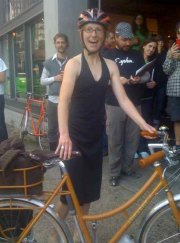 Josh Muir of Frances Cycles had a far more relaxed approach, bringing his bike to rest on the barn and enjoying at least two plates of various delights while talking to Curtis Inglis of Inglis Cycles/Retrotec.

Muir seemed to sum up what most of the riders thought about the course. “The roads are super sweet,” he said between bites of lightly dressed calamari.

With lunch concluded for the lead riders, the focus was on reaching the finish line in a good position. A tough, but beautiful climb up Old Germantown Road put the riders on the rolling Skyline Drive. It was here where bike community and the day’s race crossed paths.

Local riders from the Oregon Randonneurs had been criss-crossing the race course throughout the day, looking for riders. Knowing that someone would eventually cross their path, Phillip Andre and Joshua (no last name), waited at the Skyline Tavern, enjoying the day and a beer. Then, Dan Boxer appeared on the short climb from the Germantown Road turn.

“It was purely a coincidence that we found Dan, who was leading,” Andre said about the Seattle rider. “We weren’t there to pace him. We just wanted him to have a safe ride into town.”

The two bikers kept their eye on Boxer through the tunnels, into town, and peeled away as he approached the finish line and changing tent. He rode his obligatory one-block circuit in street clothes and entered the Oregon Manifest Bike Union to cheers and toasts from a swelling crowd.

One crowd member, Winston Goodbody who runs competitively and rides for pleasure, said he had seen nothing like the scene at the Union in his other pursuits.

“Biking just seems like a great confluence of art and culture and athletics,” he explained. “Here, it seems like someone decides to have a bike event and the Peoples Revolutionary Guard comes out in support. It’s unique and exciting.”

As more riders arrived, Boxer and his bike, who had been alone for 15 minutes, were joined by friends who were competitors moments before. Underscoring the camaraderie and community that characterized the day, Boxer described the crash scene hours before that knocked Steve Rex out of the race.

“I’m not sure who went down first, but I brushed myself off and walked back to Steve,” he said. “I asked if he needed help, even if it were just to get off the road. He waved me on. I took a couple of pedal strokes, then turned around, walked back and asked again. ‘No, just keep going’ was his answer. What a great guy.”

As the party began to build, Natalie Ramsland riding the Ahearne Cycles bike, gave the crowd a lesson in how to dress for success. The only woman rider to finish the race, she arrived in a little black dress, echoing the name of one of the bicycles in the line she builds.

“The ride was spectacular,” she said, smiling widely after 77 miles of riding. “This event was really more than a person could ask for.”

And so it was, for riders and spectators alike.

The pictured rider with the blue jersey and white helmet is Jan Heine, the man behind Bicycle Quarterly and Vintage Bicycle Press. He was covering the race and the event.
It was great to see Dan as the first rider, having ridden with him on various brevets this year. Way to go Dan! And what a fun event as a spectator.

Nice write up Mark. It was a really great day.
Just a little clarification:
Joshua _Bryant_ was the other rider who crossed paths with me up on Skyline Dr.

Steve Rex and I had two separate crashes. I went down first. He came around the turn as I was preparing to mount up and keep riding. He asked if I was okay, slowing a little, and continued on when I replied that I was.

I put on a chase, then, and just a few turns later came upon Steve who had just crashed his bike. I asked if he was alright, to which he replied that he thought he had broken his collarbone. I asked if I could help him, make a call for help, move him from the road. He replied that I looked strong and should keep riding. This is where your re-counting of my re-counting of the story matches up.

I didn’t want anyone to think he and I were caught up in the same crash. Not so.
I hope he heals up quickly and gets back to building and riding those damn fine Rex Cycles.
Cheers!