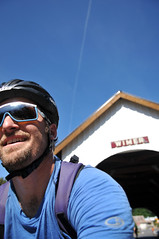 Today’s ride took us 76 miles from the small timber town of Glendale to the bustling southern Oregon city of Grants Pass.

The morning started out a bit dreary and overcast, but the first rest stop brightened everyone’s mood. Heaven on Earth Restaurant (along I-5, just north of Grants Pass) hosted the stop and they went all out, serving an all-you-can-eat buffet of baked goods — cinnamon rolls, marionberry pie, apple crisp, fresh homemade cookies, and so on.

And it was all free. They were just happy to have us. Now that’s smart marketing (I’m already planning to stop on my drive back up to Portland!).

With a sugar-stoked pace, we made our way up a steady rise to Galesville Dam and reservoir, then had about five miles of serious climbing before we reached the summit of Goolaway Gap.

Our lunch stop was in the middle of anonymous BLM forest roads. But, as per usual for Cycle Oregon, we were treated to an excellent, three-piece blues band. Another highlight of the day was the old Wimer Covered Bridge (originally built in 1892).

After Wimer, it was mostly downhill all the way to Riverside Park in Grants Pass.

Rolling into our campsite along the Rogue River, we were welcomed by the local high school band, flag team, and cheerleading team. Yep, just another day on Cycle Oregon. 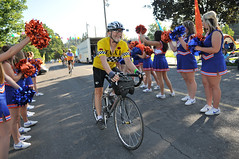 For more shots from the road, check out today’s slideshow:

In other Cycle Oregon news….
— 48-year old Catheryn Alexander was seriously injured in a crash yesterday. Alexander was apparently in a paceline when the crash occurred. She was flown to Rogue Valley Medical Center in Medford and was last reported to be in stable condition.

— Also, there have been reports from camp that some sort of outbreak of sickness is going around. I have not confirmed details with event organizers, but reliable sources say it is food poisoning and I’ve heard that anywhere from 40-120 people have been affected. More information as it becomes available.

— The annual Bike Rodeo went off last night in Glendale. The event pits Bike Gallery employees (and owner Jay Graves) in various tests of bike skill, antics, and ruthless mayhem. I’ve uploaded a gallery of photos from the event here.

Jonathan – really enjoying the coverage of this, even being out-of-state. I love a good “as it happens”/”on the road” photo series.

I grew up in Glendale and used to work at Heaven on Earth one summer in high school! Glad you all enjoyed those quiet roads.

I bet they got sick off of Pizzicato!