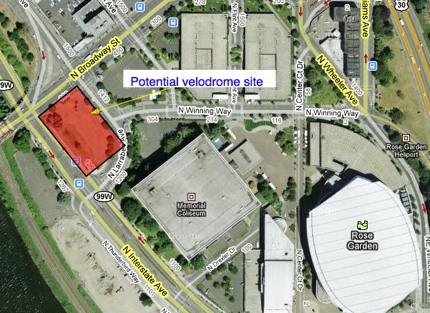 Velodrome backer Steve Brown and Jay Isaac with the Trail Blazers see potential for a velodrome at this location.
–Google Map here–

Last month we brought you the news that velodrome advocate Steve Brown was hoping to find a home for his vision inside the Memorial Coliseum.

According to sources, and to a story on KGW tonight by reporter Randy Neves, there is momentum for placing a velodrome — not inside the Coliseum — but on a vacant piece of land on the northwest corner of the Rose Quarter.

Brown met with Trail Blazer representative J. Isaac last week to discuss the velodrome idea. According to Brown, while Isaac thought the idea of putting the velodrome inside the Coliseum was “nice”, he also said it wasn’t really practical.

Instead, Isaac seems to like the idea of placing a velodrome on the northwest corner of the Rose Quarter, on a piece of land bordered by N. Interstate Ave and the eastern off-ramp of the Broadway Bridge.

Brown loves the idea (he was never attached to doing something inside the Coliseum, he just wants space anywhere in the Rose Quarter) and he’s already working with his architect to develop a concept drawing for the site. Brown is also working with noted velodrome builder Peter Junek on designs to fit a covered, 200 meter track into that location.

The City has made it clear that they want the new Rose Quarter to be a playground for Portlanders, and it seems like a velodrome with additional bike-related facilities fits nicely into that vision (not to mention its inclusion in the plans would create a groundswell of community support — something the politicians at City Hall are well aware of). We’ll try and track down more information about this vacant parcel tomorrow and see if this idea really has some legs.

I just saw the news article on KGW and its worth mentioning they are talking about a covered velodrome.

Nice redirect on the part of the Blazers to get Steve Brown, Bike Portland, and KGW to all immediately capitulate on the Memorial Coliseum concept. J Isaac is earning his salary.

Here’s the deal: the Blazers own a right of first proposal at the Coliseum. If they propose something that the City rejects, their contractual interests have been satiated. At the same time, if the City proposes an entirely non-profit alternative to the Coliseum’s status quo the Blazers cannot stop it.

The parcel in question here is complicated at best. It (a) is owned by ODOT (a nightmare bureaucracy to work with), (b) has a steep slope, and (c) is surrounded by important roads, making access a pain.

As a result, you can mark my words: there will never be a velodrome at this location. Which is precisely the Blazers’ intent.

C’mon, Jonathan- dig into this stuff. Don’t be duped. Same goes for you, Steve Brown.

Withheld is right,Nightmare in that neighborhood to get around.
some outdoor hoops / half courts would make more sense.

I still vote for a drome in the oaks park area, with new Sellwood bridge, and light rail close by. samtracks could shuttle & Bikes could get there from springwater.

Its not that steep there, and it is close to the trimet hub…whether it will be built, I doubts…

@KWW: it’s unclear what qualifies as “steep” for you but I guarantee that slope is steep enough to ensure a velodrome is cost-prohibitive. The fact that the parcel is “close to the trimet hub” doesn’t make a prospective velodrome any cheaper, accessible, or viable.

J Isaac knows exactly what he’s doing when he proposes an idea like this. It allows him (the Blazers) to say hell no to a velodrome without having to enflame the local bike community.

Dear Withheld, I will talk to anyone just about anytime about any reasonable proposal to improve track racing and share it with the larger community. If the Blazers want to talk, I will listen. My goal as a member of the track racing community is to help provide the best venue possible for riders, attract new riders and have the velodrome be a community asset for sport, entertainment, business and the cycling in general. To accomplish this will it may take the support of more than the Alpenrose family and a few people with big thighs. Not every idea is practical or will work. Mr. Issac was nice enough to spend the time to talk to us about we might fit into the Rose Quarter development. My job is to find potential support and to put the a program together. A month ago the Blazers knew nothing about velodromes. With their current goal of building Portland’s playground in conjunction with the City and PDC, they at least have a new option. I have never claimed to know everything about velodromes or the best person to do it. But I am going to at least get out there and try. If you have something to contribute, find a way to contact me.

these things take time. I do like the Sellwood area idea however…the Blazers are not in the cycling business.

What would be interesting is to get some of the blazers out rehabilitating knees, riding and training on the velodrome. Granted if they did, they would have a super high intensity threshold and would be able to run circles around all the other NBA teams come basketbnall season, soemthing the NBA couldn’t have that now, could they 🙂

yeah outdoor basketball hoops…might as well put a playground there.

Um Alpenrose is built into a slope.

In the spirit of contributing to your ongoing success, my intent is to help you understand the Blazers have no sincere interest in helping you land a velodrome in the Rose Quarter.

The Blazers have long held designs for the entire Rose Quarter that center on a corporate entertainment complex. Remember the Cordish Companies? That’s their vision. The ROI on a velodrome is decimal dust compared to what they have in mind.

Rather than tell you that face to face, they encouraged you to plant banana trees in Siberia, a parcel owned by ODOT. Once you know something is owned by ODOT, you should just stop unless you have elected officials willing to do battle to roll ODOT bureaucrats – a highly unlikely scenario. Ask ODOT’s Jason Tell about the likelihood of you getting this site.

Bottom line: flirt with the Blazers at your own risk. For additional insight and information on how the Blazers engage, see Commissioner Randy Leonard.

Good luck. I’d love to see a velodrome in the Rose Quarter and there isn’t a chance it will happen in partnership with the Blazers.

Communication via blog is a difficult way to live. I would appreciate it if you would contact me directly.
From your letter you obviously know a lot. In fact, it seems like you know maybe too much. If you know so much, then why don’t you contact me so I can make use of your knowledge. I only have so much time and limited resources. Sitting in the background and letting me make mistakes does not do a service to track racers or the bike community.

With respect to the technical limitations of the site, I disagree.

As to The fact that the parcel is “close to the trimet hub” doesn’t make a prospective velodrome any cheaper, accessible, or viable., huh? Being NEXT to a Trimet hub which is part of fareless square does not make the velodrome any more accessible?

The REAL problem with that site is that it won’t hold a regulation 250m velodrome. The site is too small to fit the track, let alone spectator seating.

In that way you are correct, Withheld. There will never be a velodrome on that site.

kww: 200 meter track just might fit. Site is a natural bowl that could accommodate seating. The advantage to the site with this slope is access to the track from below. 200M is a great size. With the proper geometry will be easier to ride and a whole lot faster than Alpenrose.

If they do this I will have to pick this sport up. I love the idea. They may have to consider some traffic calming in the area if this goes forward.

Possibly Steve, a 200m could fit, but hey, this is Portland and we SHOULD have a regulation sized velodrome, not just for local use, but to host world caliber events.

For comparison, the track in Trexlertown PA is a 333m track. If the Rose Quarter can’t fit a 250m, it should be built somewhere else.

kww: We already get world class riders at Alpenrose.
One of our biggest supporters outside of the area is Erin Hartwell. If a 200 is OK by a double Olympic Medalist, then it is OK by me. UCI does not have a problem. The Revolution organizers I have communicated with would be happy with a 167. It is not the size, but the quality of the program.