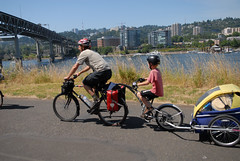 On the July 4th weekend, my girls and I joined two other families for a camping trip unlike any other we’d ever done. Instead of loading up the mini-van and driving for a few hours to the mountains or the coast, we loaded up our bikes and pedaled our way to family camping bliss.

We rode from North Portland to Champoeg State Park (south of Wilsonville). It was about a 40 mile trip (each way) and the journey was definitely just as much fun as the camping itself.

The folks who joined us had also never done a bike camping trip, much less one with their little loved ones in tow. There were six adults and seven kids. The kids ranged in age from three months to eight years. They were all troopers, especially baby Hendrik, whose sweet little cry hastened our pedals to the next rest stop more than once.

Riding together, we were like an armada — a flotilla of families on bikes. Lined up wheel to wheel, we estimated the length of the whole crew was nearly 80 feet long. We had Xtracycles attached to tag-alongs, attached to trailers. One dad, Joe Hagedorn, pulled a tandem-tag-along with his two boys and a trailer stuffed with camping gear. 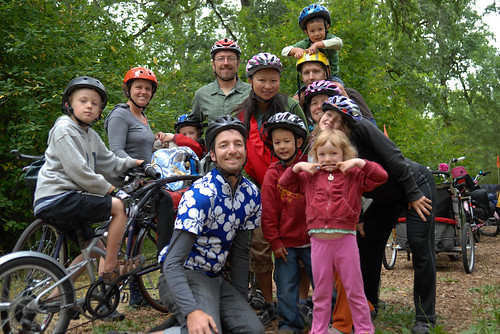 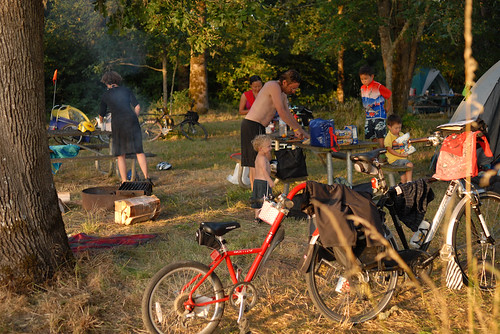 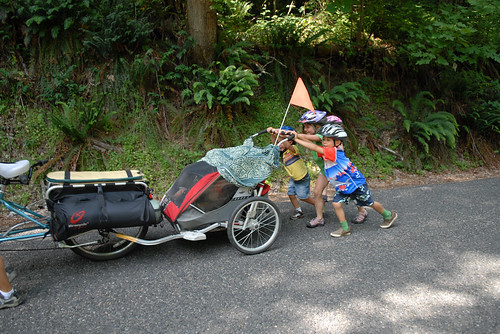 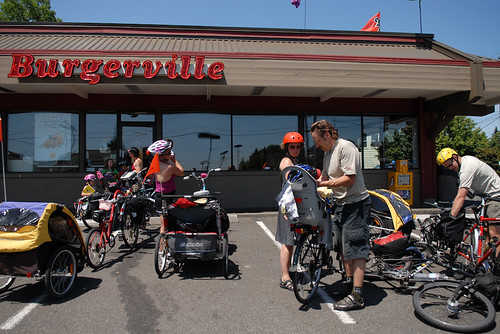 After a mechanical mere seconds from the start of the ride, we had smooth sailing. We rode along the Esplanade, then the Springwater, and then through Sellwood (where we stopped for our first break that included home made beef jerky made by mom of three-month old Hendrik, Hau Hagedorn). Before long we were in Milwaukie and enjoying the wide bike lane on River Road. 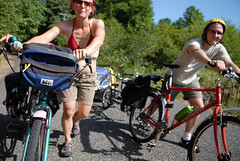 No shame in walking.

As we headed south toward Oregon City, a Burgerville beckoned us for lunch. We pulled into the parking lot (taking up two motor vehicle spaces) and devoured shakes, fries, and burgers. We needed the fuel, because our first challenge — the Oregon City Bridge and the climb up to Willamette Falls Road that followed — was just down the road.

As temps soared, faces soured a bit. A few hills were tougher than we thought. But there’s no shame in walking, so we did. Even the kids got off and helped.

The climbing made the breezy jaunt on the Canby Ferry all the more enjoyable. After that (and a glorious respite from the sun thanks to some farm sprinklers), we rolled into Champoeg State Park.

The hiker/biker campsite was nestled down a path away from noisy RVs in a grove of large oak trees. The hammock was strung. A fire was made. We made it! It was time to enjoy the park (Oregon State Parks rule) and settle in.

The next day we spent exploring. We played a bit in the river (although Champoeg doesn’t technically have any developed river access for humans), we learned about Oregon history at the visitor center, we tried to check out a local winery (nice place, but they were closed), and we hung out at the legendary Butteville Store. The store, operated by State Parks, is the oldest operating retail store in the state. It had old-timey music, microbrews, belgian waffles with berries, and plenty for the kids to do. 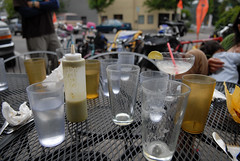 Our way home the next day wasn’t as nice as the way there. Fearing those face-souring climbs, the group voted to take a more direct route. It was 99E all the way to Oregon City. We’ll never do that again. It’s a two-lane state highway with no shoulders. Luckily, the strongest rider in the group rode sweep and muscled cars out of our path with sheer will (and a lot of “get-the-f#$@-over-please” gesticulations).

But the not-so-pleasant highway riding experience could not dampen our mood. A few margaritas and fantastic Mexican food courtesy of Cha! Cha! Cha! in Milwaukie sealed the deal — family bike camping is an awesome way to spend the weekend. Where to next?!

More photos in slideshow below:

— Check out the routes we took to Champoeg and back home (courtesy of Bikely.com).

I’ll presume you mean you enjoyed it *after* the hill. 😉

I’m impressed that you rode 99E back – I’ve ridden it each way ONCE, and that seems to be the opinion of most people who’ve ridden it. It’s claimed a life before, and that road is never pleasant. For those who’d like some other options for riding to Champoeg, here are a few:

My preferred route out
Most direct, but hills and 1mi of freeway
Route via West Linn/Canby Ferry

One ongoing wording/tone nitpick – “carfree”. Yes you were, and yes that’s great (really, it is; I’m envious. I took a group of Girl Scouts on a bike camping trip MANY years ago, and I was clueless too, but we all survived and had a great time), but how about “all by bicycle”. That’s positive for you all, and not HTH, if you know what I mean. Focuses more on that you had great fun doing it by BICYCLE.

Lynne. Thanks for the feedback. I understand your concern and I too am sensitive to word choice.. however I must balance what someone will project onto a word in a headline with my need to communicate certain things.

I think it’s important for readers to understand quickly by glancing at the headline that no cars were used on this trip.

I hear you about the holier than though (HTH) concerns… but really, seems to me if someone is offended by that i think they’re perhaps a tad too insecure and defensive maybe?

yeah, holy crap, i can’t believe you guys all rode 99E all that way.

but other than that, sounds like a ton of fun.

Perfect timing Jonathan. I’ve got a family reunion this weekend at Champoeg and was just wondering what route to take. Thanks for the other route options Matt.

The weekend after that, my fiance and I did a bike tour through the north coast area on our tandem. I know what you mean by “Where to next?” Michael likes to sit up in bed when I’m reading a novel and trace routes through his road atlases and I find I’ve begun to do the equivalent with the Oregon State Parks map.

Thanks for that cheerful report; it just reeks of good ole’ summer fun (not to downplay the effort). And thanks for the route pointers. Happy CO weekend.

this is fantastically inspiring.

The tandem-tag-along with kids and a trailer is the next family car!

That is super cool. My wife and I talk about stuff like that, but it’s all off in the mystical land of “someday”.

You make it seem much closer and doable with this piece. Thank you!

What an inspiring post! Our family just did our first bike camping trip (we’re in Ottawa, Canada) and we’re wanting to stretch and do a lot more (ie go further, more excitement!). Our blog post about it can be found here:
http://carfreewithkids.typepad.com/car-free-with-kids/2009/07/bike-camping-with-kids-in-ottawa.html

That’s so awesome, and those pics are really great! I’m envious, I don’t think I’d have what it takes to go camping like that! 🙂

It looks like you guys went up Turner Rd to Mountain Road and around that way to the Ferry? That’s the smarter way to do it– otherwise, you have to go up Pete’s Mtn Rd and that climb is a bear. And so is the next climb after that, and the one after that… Pete’s Mtn Rd is nothing but icky hills until you get on the Wilsonville-side of it. 🙂

Champoeg is such a fun area– I’m sorry Champoeg Winery wasn’t open when you went by! They have a great Chardonnay (aged in stainless steel instead of oak), perfect for summer days.

what a great story! thank you so much for sharing! this sounds like so much fun, for everyone! way to go! :o) oh and the pictures are wonderful!

I was somewhat appalled that you chose 99E as a return route. This is an infamous “blood alley” for both cyclists and drivers. It is unrealistic to expect drivers to see you and anticipate a lane change or safely move over at the posted speed limit (wild “get the f**K over please gesticulations”or not).
I would encourage you and your readers, especially if they are neophyte cycle tourists,to carefully research their route options prior to their trip.

This must have been in the early 60’s. My brother and sister rode their bikes around Mt Hood via Hood River. I rode from Multnomah to a rondevous with them in Estacada, then my sister and I rode up the Clackamas River Road as far as the Calawash River for some camping and fishing. Caught a few, but it was a rainy July weekend. Keep the Clackamas River in mind for your next trip.

Wow. Your crew went up Turner towing all that stuff? And kids? Dude. That’s awesome.

I want to trailer my 3 month old. I’m told that there are no helmets and the infant insert for my burley trailer is not for biking, but for the jogging/stroller function.
How did you transport your 3 month old? Anyone else.

Fantastic and inspiring. Congratulations. I’ve got an annual dads and kids trip to Champoeg in a month, but I don’t think I’ll be ready by then. I had already planned on an xtracycle conversion on my mtb this fall so I’ll be really tempted to try this next summer.