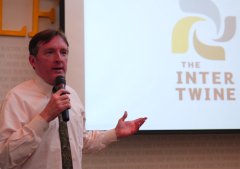 Last night, at the headquarters of Keen Footwear in the Pearl District, Metro Council President David Bragdon unveiled the new name and logo that will serve as the umbrella for a bi-state effort to build out our regional trails and parks system: The Intertwine.

Formerly known as Connecting Green, the effort launched over two years ago with an ambitious goal — to create the world’s best system of parks, natural areas and trails. The idea was to help focus and organize the efforts of the many community leaders and agencies who were already working that goal.

Speaking to a crowd last night that included Senator Jeff Merkley, Bragdon said there was a lot of great working being done, but he wondered, “Is all of this adding up to the sum of the parts?”. “The one thing we’re missing,” he said, “Is a way to talk about this to citizens…an umbrella we can all use when we’re going after grants… when we’re looking for ways to share what we’re doing.”

So, what exactly is The Intertwine?

Here’s an excerpt from how David Bragdon described it last night: 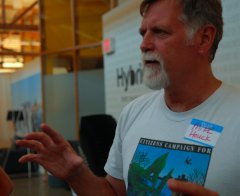 “The Intertwine already exists in the hearts of the people that are here, they just don’t know it yet… they don’t have that word to use to explain it to others or to each other. But, if you ask people about what they love about living in this region, chances are a vast majority are going to tell you something about we like that we have trails, parks, nature in the city… they’d use a whole lot of words, what we’re trying to do is give them one word that will help to brand this region to ourselves and to outsiders and to give all the constituent partners — whether it’s the City of Forest Grove or the City of Gresham, the City of Portland, the Watershed Council — an umbrella where they can all work together.”

And here’s how it’s explained on a brochure passed out last night: 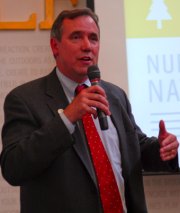 U.S. Senator Jeff Merkley was
there to show support.

“The Intertwine is an ever-growing network of integrated parks, trails and natural areas that will one day soon be the world’s greatest system of its kind. The Intertwine provides unparalleled opportunities to preserve natural areas, open spaces, water and wildlife habitat. It reflects our region’s passion for quality of life by encouraging recreation, connection to nature, and active transportation — like walking, running and biking. As our urban areas grow denser, The Intertwine will promote the health and happiness we, as citizens of the Pacific Northwest, so dearly value.”

The Intertwine (I’m still waiting for the name to grow on me) is essentially Connecting Green 2.0. I asked Bragdon why they changed the name. He said,

“We felt ‘Connecting Green’ was more about the various agencies and movement while ‘Intertwine’ is more about the place and the function. We wanted a name that really is about the user and the user’s experience, rather than about us and the other providers.”

So, why should you care about this?

The Intertwine has five major focus areas (they call them petals on a flower with the “core team” in the center), one of which is “Trails”. Don’t let that word fool you, this is not just about recreational, multi-use paths. Through this effort, Metro convened a Blue Ribbon Committee for Trails that ended up focusing more on trails as transportation corridors and building the case for an “integrated mobility strategy” (you can download a PDF of that here).

You’ll be seeing a lot more
of this in the future.

Last October, they did a study tour of Copenhagen and Amsterdam and, while the Committee is completed their initial charge, several members remain engaged and are now volunteer as lobbyists for state and federal funding of non-motorized transportation and other tasks. One member of this new “Executive Council” is former President/CEO of the Portland Metropolitan Chamber of Commerce, Randy Miller (who was also featured in the Mercury’s recent Bike Issue as Portland’s “secret bike champion”).

This might sound like a lot of marketing pizazz and just another bureaucracy, but it’s not. Metro has put a lot of resources behind this and they mean business. Don’t forget that Metro recently awarded record levels of federal funding to bike projects.

Along with the new Intertwine moniker, Metro announced last night that they’ll kick off the effort to the public on National Park(ing) Day, Friday September 18th. Metro plans to “celebrate the mission” of The Intertwine by coordinating Park(ing) Day throughout the region. The plan is to have every park and natural area in the region set up displays in parking spaces around Pioneer Square in downtown Portland.

For more, check out the old Connecting Green website or the new TheIntertwine.org (which I assume will be updated soon).

thanks for the great recap of the event and the Intertwine initiative as well as for the pointer via Twitter.

I was at the brand unveiling too, sorry we didn’t get to connect. Next time!

I’m writing a post on my blog about the Intertwine from the marketing perspective. Any idea where I can get the slideshow they used? It would be great to embed it with the post. Thanks!

One ‘arm’ I’d like to see in this program would be to educate our legislatures in Salem so that they realize money spent on these issues will pay us back tenfold, and therefore, we should get more funding, not less or the same, as the case has been.

So, the spaces or their users go “between twine”? I don’t get it. Or, to put it in language David Bragdon can understand, the name exists in my heart but not in my brain.

I’m curious to hear what people’s reactions are to the name “The Intertwine.”
I posted some additional photos here:
http://bit.ly/6vh4Y

A couple of us, mountain bike advocates, attended the event and we are thrilled about Metro’s effort to develop a region-wide network of parks, trails and natural spaces. We hope that this initiative will mesh well with all the ongoing efforts to provide more off-road riding opportunities close(r) in to Portland, so people don’t have to get in a car to go ride on trails.

The Intertwine name will take some time to grow onto people, but I personally think it’s great moniker for something that will be very unique, both in concept and scope.

the name is pretty clunky and gives little clue as to what its about: the same idea that many groups have been hammering on for decades, connectivity to natural spaces and meighborhoods. Whether its the orginal 40 mile loop espoused by the Olmsteads or the stewards of natural areas and trails preserving spaces to be availale for recreation,habitat,transportation or whatever use one might have. Those natural areas are important to us now, and will play an even bigger role as the metro areas numbers swell in the future.

IMO, a dumb name on par with the ‘see and be seen’ graphic design logo

I believe the Intertwine logo is the WorldCat.org logo spinning in reverse.

Great. If Bragdon ever runs for national office, he can claim that he invented the Intertwine.

I’m constantly discovering new stuff while rolling quiet streets in Portland. The name doesn’t grab me but the concept of coordinated planning and implementation does.

May I suggest that The Intertwine include brewpubs. No? Ok then.

“Intertwine” does nothing IMO to say what the program is about. “Connecting Green” was better, though still pretty obscure.

If you want people to know you’re talking about trails, perhaps put “trail” or “path” somewhere in the name. “Greenway” works, although it’s kind of buzz-wordy.

In any case, I wish they’d pick one and stay with it. How much money did they spend for the new logo, and will they spend for new signs, leaflets, website(s), stationary, and schwag for the public? $1 million? That could buy a couple miles of trail – this money would be insignificant for a road project, but when talking bike/ped, these expenses add up to real money, and it doesn’t make sense to use that money for this purpose unless there is clear evidence that the “brand” change will increase funding, increase trail use, or be paid for by funds that can’t be used for actual trail construction, maintainance, ROW acquisition, or planning.

I find it hard to believe that changing “Connecting Green” to “Intertwine” is going to have any significance in terms of awareness or funding, and unless this money was earmarked for this specific purpose, I think it’s a highly irresponsible use of public funds.