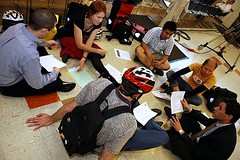 Bike advocates huddled with the
BTA’s Scott Bricker before testifying
at the 2007 hearing.
(Photo © J. Maus)

With the prospects of bike funding looking grim Salem, the residents of Portland have a chance to set a different tone.

Tonight (5/21) in Southeast Portland the Mayor and City Commissioners will listen to testimony about the Mayor’s proposed budget prior to their vote to adopt it on May 27th.

At stake for people who care about bikes as transportation is $4.7 million dollars in funding for bike projects and programs. Here is a list of bike-related line items in the budget.

Affordable Transportation Fund
A.k.a. the Bicycle Infrastructure Improvement Fund, this the money Mayor Adams carved out of the Utility License Fee (we reported about it last month). The new fund would allocate $500,000 for bike projects and that number is likely to grow in the coming years. If passed, the BIIF would help fund the new cycletrack being planned on SW Broadway, new “buffered bike lanes” PBOT plans to unveil next week, and it will help fund planned bike boulevards.

Energy and Efficiency Conservation Block Grants (EEBG)
The Mayor’s Proposed Budget includes $400,000 in one-time funds that would be evenly split between the Safer Routes to Schools and SmartTrips programs. This $400,000 comes from at total pot of $5.6 million that the City of Portland got from President Obama’s energy stimulus bill.

Federal Highway Administration (FHWA) Stimulus Funds
Our region got an estimated $300 million from Obama’s stimulus plan that could be spent on “shovel ready” transportation projects. Mayor Adams is proposing that $2.8 million of that goes toward “bikeways”. According to Adams’ Transportation Policy Director Catherine Ciarlo, the $2.8 million would be split between two projects; $1.8 million for the repaving of the Springwater Corridor and $1.0 million for signage and markings of 53 miles of bike boulevards (the signs and markings are the only portion of the boulevard projects that are “shovel ready”).

With so much at stake in the Mayor’s budget, the Bicycle Transportation Alliance (BTA) wants the community to show up in force to testify on behalf of bikes. They’ve got a ride to the hearing planned and they’re urging everyone to wear “bike box green” at the hearing.

For a taste of how these hearings go down, check out my report and photos from the Community Budget Hearing in 2007.

— Learn more about the Community Budget hearing at PortlandOnline.com.

$1 million for 13 miles of simple signs and markings makes me cringe. I know that is fairly standard, but it still hurts.

— Schrauf. It’s actually for 53 miles. I made a mistake. Sorry for the confusion. Shouldn’t make you cringe as much now. — Jonathan

I really appreciate you posting this story about the mayor’s budget meeting.
I was thinking about going, but was not sure how bicycle-related it would be. After having read this, I am definitely going to be there! thanks.