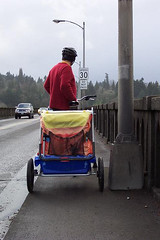 We’ll be bringing our next BikePortland Get Together event to Milwaukie, Oregon, our neighbor to the immediate south.

Anyone who lives, works, commutes, rides through, or otherwise spends time in Milwaukie (or its general vicinity) is invited to join us.

Milwaukie seems to be quietly experiencing a bicycling renaissance.

Back in 2007 the city held a series of Transportation System Plan meetings, out of which came a more coherent vision for biking in Milwaukie, as well as a bike map has been created and bike parking has been installed downtown. Another result was the grassroots formation of MilwaukieBIKES!, a group centered around an email listserv and billed as “a convenient communication hub for the bicycling community of Milwaukie, Oregon.”
The city maintains a good comprehensive resource page for people who ride, and may soon form a Bicycle Advisory Committee

On hand to chat will be several local bike advocates and Brett Kelver, an associate planner with the City of Milwaukie who is working on a signage plan for the city’s bikeways. Kelver will update us on the
status of the bikeway signage plan, which is similar to Portland’s green bikeway signs showing mileage and approximate times to various destinations. The draft plan is available from the transportation section of the City’s website.

This is the fourth in our ongoing series of monthly Get Togethers. These are informal social events meant for everyone to meet each other, talk shop, compare notes, and generally have a fun evening. Come discuss all of the above, as well as bike routes, connections, issues in Clackamas County generally, and whatever else is on your mind.

By popular request, the event will be at Cha Cha Cha at 11008 SE Main Street in Milwaukie, which apparently has the best selection in town of local, organic beer on tap, and a food and drink happy hour coinciding with part of this event (through 6pm).

What routes do people generally use in Milwaukee? It looks like the side streets are pretty well connected, but there are some major gaps that need to be filled. River, McLoughlin and Oatfield seem to be the only north/south routes that go through. They need to put in some shortcut paths so that people can take side streets if they want, if they don’t already have them.

Currently the heaviest E-W use is Monroe, King and Lake Avenue. A significant number of cyclists use Industrial Way as well. N-S access is typically 17th or Main from the north and River Rd, McLoughlin and Oatfield to the south on the west side. On the east side, N-S through the city happens mostly on Linnwood and Wichita. Some traffic comes down 45th and down 42nd, but that’s not the greatest biking route.

The city has plans to construct 3 bike boulevards in the future, but at present there is no funding for them.

There are a few shortcuts in various areas, I led a couple of “Hidden Routes of Milwaukie” rides during the TSP update in 2007. I may lead another one of those during Pedalpalooza this year if I have time.

What major gaps do you see? If you have suggestions, bring ’em Monday and talk to Brett Kelver – Brett’s worked really hard to get things moving in Milwaukie and the entire planning staff there is really responsive and a dynamic group.

Matt, I think I might have been confusing Oak Grove for Milwaukee — I thought Oak Grove was a part of Milwaukee. At any rate, I was looking further south. There are gaps within the River-Concord-McLoughlin triangle. There is a gap around that creek in the River-Courtney-McLoughlin triangle. There don’t appear to be many crossings at the creek above Aldercrest or between Aldercrest and the streets that lie south of it.

But I guess that’s not Milwaukee — Milwaukee is further north, and it looks significantly better.

They are in fact, two very different places, and the founder of Milwaukie, OR, Lot Whitcomb, specifically decided to call ours Milwaukie so people wouldn’t confuse the city with Milwaukie, Wisconsin.

Here we are 150 years later…and people are confusing Milwaukie, Oregon, with Milwaukie, Wisconsin.

And in the pioneer cemetery, Mr. Whitcomb is turning circles in his grave…

Now you’ve got me doing it too! ARGH!

It’s MilwaukEE Wisconsin. Your sending me to an early grave (to turn circles).

Hey Chriswnw, have you tried the trolley trail between McLoughlin and River? It’s quiet, mostly dirt and will get you from Park on the North to Portland Ave in Gladstone on the South, with a few interruptions where you have to take to the street. Just follow the telephone wires overhead and you can’t go wrong.
http://www.oregonmetro.gov/index.cfm/go/by.web/id=1925

Ooo, nice — that should be really good once paved. I have 700-23 tires, and probably shouldn’t ride on it until then 🙂

chrisnwn (#4) – yep, that’s Oak Grove, and outside the Milwaukie city limits. The Trolley trail will be running N-S through that area in a few years. Metro has acquired all the land, and construction is slated to start soon on the northrnmost segment. Brett might have some info, and I’m planning to show up on Monday for that event. I’d be happy to describe what’s going on down there to anyone who wants to know. I used to live in Oak Grove and I’m very familiar with the area, and I’ve kept tabs on most of the projects in the works.

Since that area is outside the city limits, it falls within the purview of the county Bike/Ped committee. The Clackamas BPCAC meets on the 1st Tuesday of the month in Oregon City at the new county offices at 150 Beavercreek Road (at the junction of Beavercreek and Kaen) – they have plenty of bike parking, and the #33 or #99 bus can take you up the hill and to within 1/2 mile of the county buildings.

Yeah, forgot to say that Trolley Trail is passable now on much of its length. You could use 700-23s in dry weather, it’s a dirt surface, not gravel. There’s one spot near the elementary school that’s always wet due to nearby springs.