[Editor’s note: The story below, written our Family Biking columnist Marion Rice, is a follow-up to a story we published on February 2nd. That story introduced you to Portlander Angela Koch and posed the question: Should you ride while pregnant?] 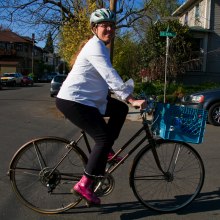 Angela Koch is now 32 weeks pregnant, and she’s still biking around the streets of Portland with a smile on her face. Her belly is significantly bigger now than it was back in February when I first wrote about her, and she’s still doing great.

Sure, at the end of a long day she’s tired, and there are a few aches and pains (darn sciatica) — but nothing that keeps her off her bike.

“I have a fascinating sense of what it must be like to be a brand new rider. Because I’m so very slow and sometimes wobbly…”
— Angela Koch

However, as a result of the physical changes she has had some unique insights; “I have a fascinating sense of what it must be like to be a brand new rider. Because I’m so very slow and sometimes wobbly, I feel like I can empathize now with the folks who are out on the road for the first time. I understand the possible frustration and embarrassment they may experience being passed by regular, much faster riders, as well as the heightened sense of awareness of the speed and danger of motor vehicles. I’m not scared, just more aware.”

And it seems bystanders are more aware of Angela too. A few weeks ago, Angela was riding along and someone called her “a fatty cyclist.” “They clearly didn’t realize I was pregnant,” Angela says, “And I was hurt. But then I realized what a ridiculous thing it was for me to be hurt, and for them to make a judgment about my body whether overweight or pregnant.” 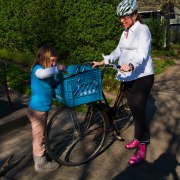 The bottom line for Angela is that she feels completely confident in her decision to continue biking. It has been a nice slow progression of changes to her current state. She didn’t just hop on a bike at 34 weeks into her pregnancy. She and her baby are already used to biking almost everywhere together. Undoubtedly, her fitness level will continue to help her have a healthy pregnancy and birth.

If Angela goes full term she is due on June 23rd. In celebration of her due date Angela has planned a Pedalpalooza ride she has aptly named “Celebrate Waterbreak” She fully intends to get there in style and on her bike and has invited other mamas, pregnant or not, to join her.

Here’s to a wonderful summer for all mama’s biking with a bump.

Marion Rice has been producing educational media since 1993. She has been the Executive Producer of a number of web sites for PBS.org including The PBS Parents Guide To Talking With Kids About War and Violence, History Detectives and The New Heroes. Most recently she was the Co-Executive Producer of a web site for parents to help them support their children’s emergent literacy from birth to age 5.

Marion Rice started writing the Family Biking column for BikePortland in 2008. She is interested in developing stories that are relevant to families on all parts of the car free/ car light continuum. In addition to writing, Marion helps the BikePortland team with her experience in fund-raising and corporate development. If you have a story idea or would just like to get in touch, you can reach her at (503) 708-0707 or at marion[at]bikeportland.org.

Very nice. My wife biked to our son’s delivery. It started as a check up but we had a kid at the end of the day.

Congrats to Angela. Way to go.

I’m curious whether she made any sort of hardware adjustments as she reaches this late stage (more upright riding position, lower seat, wider saddle for the hip changes, etc.).

Great story! I stopped riding at 16 weeks because I was scared about traffic (which was never an issue pre-preg) and also couldn’t handle huffing and puffing up the Seattle hills. Nice job, Angela.

Only someone who has some serious issues with their OWN body would call someone a “fatty” anything (pedestrian, cyclist, etc.) Good lord.

Go, Angela! You are my cycling hero!

Love it. Angela, You should find a handful of other pregnant portland biking mommas and put together a calendar. It would dispel the notion that biking is a spandex only activity. Jessica Roberts could have her photo shot as she works her way up the mississippi ave yet to be bike laned commute. I’d suggest you wear your cowby girl boots in any photo – the ones that clip in to your pedals – I’m still waiting on a pair for Beth. I don’t want this post taken in a sexist context please – I just think if folks saw that biking can be done by anyone at alsmost any stage circumstance in their live – old, young, pregnant etc. it goes a long way to opening up the activity to more folks. (That said, I do have a bit of a thing for those cowgirl boots. gotta find out where/how you did that so i can get some for Beth)

Cheers Angela! Thanks for agreeing to let them write about this here. It’s inspiring, really. I hope it’ll add push to folks who feel cycling is really dangerous (it isn’t), or really difficult (it isn’t) and help them feel more comfortable getting out there (which incidentally, will serve to make it even safer and easier for us all).

I’ll loan her my 18″X24″ coroplast sign: Baby On Board. Worked great everytime to get cagers off my six at least sixty feet back.

NOBODY wants to be on the six o’clock news nailing a baby on board. Also, rear-view mirror.

You know, I’ve heard people say that when it comes to cycling – “get ’em started when they’re young”, but this is taking it to a whole new level. 🙂 Kudos and enjoy your rides!

I know at least 4 other biking mamas-to-be and I look forward to bringing them to Angela’s due date ride!

I rode throughout my pregnancy too and my body bounced back pretty quickly to its pre-pregnancy state after I gave birth! I highly recommend following Angela’s lead. Just be extra cautious.

I’ve been called a “fatty cyclist”– but I happened to be wearing my Fat Cyclist.com jersey at the time.

What a great story. Here’s to cycling mamas! One question/clarification – the article says Angela is 36 weeks pregnant, but not due until June 23rd. Full-term is 40 weeks which means she is either 32 weeks pregnant or due sometime in May rather than in June. Not that it really matters – cycling through pregnancy is amazing no matter what week it is.

Thanks for the great support all! I love this town and all the positives that come with cycling here.

John #2: I started riding my old Suburban back in January so I could carry my stuff in a basket rather than on my back and that got me through the winter. But just this past weekend I had to ride out to Hillsboro so my husband found the tallest stem he could and put that on my Motobecane cross bike with road tires. I took the MAX as far as I could, then rode on that much faster bike, SPDs and all. It felt so nice but I had to ride with my knees flailing and my tummy muscles were pretty pooped. It was a good change of pace, though!

Sorry for that mis print..about how many weeks she was.. will fix that!

very nice post!!
and must I say those boots are great 🙂

Being derogatory to someone on a bike who is behaving appropriately, regardless of physique, is most definitely uncool. Smacks of the how dare you slow me down mentality, to me.

I was out at Post Canyon riding this past Sunday and saw a woman, pregnant and in full free riding gear. What a woman! Nothing like sporting a full face helmet and a belly! Rock on.

Most of our society now gets that being pregnant is not a disability. Wahoo!
Our bodies work well and do a good job of protecting baby. Simple modification in activity make it work.

Here’s a picture of my friend Erin, who rode her bakfiets up until the day she gave birth – actually she rode it while in early labor, and called her husband to come and pick her up. Erin’s husband rode the bakfiets home with a laboring Erin and her toddler in the cargo box. She has a smooth and easy homebirth. 🙂