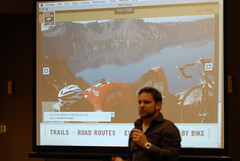 David Lowe-Rogstad and the
home page of the new site.
(Photos © J. Maus)

Yesterday in Salem at the Oregon Bike Summit, we got a sneak peek of the new “Ride Oregon” website. When it officially launches in mid-May, the site will allow visitors to learn about Oregon’s great rides, plan a trip of their own, find the best hotels, places for a post-ride meal, and more.

The site (URL yet to be announced) is funded by Travel Oregon and it’s being created by Substance, a creative design agency based on Portland. Travel Oregon put their support behind the site after hearing years of requests from communities and advocates around the state.

“We want to tell your stories to the world and this is where we’re going to do it.”
–David Lowe-Rogstad, Substance

David Lowe-Rogstad and Stephen Landau from Substance gave summit attendees a tour of the new site and pointed out several of its features.

Lowe-Rogstad said their mission in creating the site was to “sell the emotion of being here [Oregon] on a bicycle” and to “develop a tool to empower and inspire biking in Oregon”. The central theme they adhered to was “Celebrate the ride”. Lowe-Rogstad said that the site won’t try to do everything, but they hope it will be a central hub that can quickly point people to the information they need.

Among the many features the site will offer are:

Other highlights include the ability to leave comments, and to create lists of contacts. The social media aspect is very interesting. On a ride detail page, you can add your profile to one of two lists: “I’ve done this ride” or “I want to do this ride.” Then, when several people want to do the ride, they have the ability to connect with each other (and could even do the ride together if the chemistry is right). 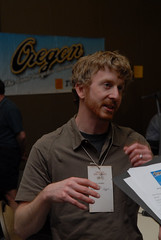 Stephen Landau is one of
the site’s creators.

Travel Oregon’s Tourism Development & Sustainability Manager Kristin Dahl announced last night that they’ve already populated the site with about 70 routes throughout the state (they put out a call for submissions last month).

Lowe-Rogstad said they’re still in dire need of tips and submissions about all things bike in Oregon. “It’s a living beast,” he said, “when we launch, it’s just the beginning.” He also emphasized the tourism aspect of the site, saying, “We want to tell your stories to the world and this is where we’re going to do it.”

Stay tuned for an announcement of the the web address and official launch.

I’m excited for the mid-May launch. Based on the initial look we got yesterday, this could be a very powerful tool for promoting bike events, destinations, trails etc to visitors from outside the state.

The Substance folks know what they’re doing, from both the web design & the cyclist/user sides.

This’ll be a fantastic resource.

I am stoked about this. What perfect timing for this amazing website. While the Oregon bike map is easy to read, it doesn’t have a topo or hot spots for food and the like. Good times. Now, if only California could get themselves organized in the sense of bike maps, making treks down there would be easier.

While not the best, Caltrans DOES have bicycle maps for most of the non-urban districts. District 5 has the best, with route profiles and traffic counts. Just contact the Caltrans Bicycle Coordinator (www.dot.ca.gov) and they will send you the maps, free.