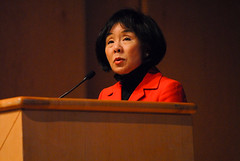 With a commitment to focus on livable communities, and with active transportation advocates in key positions of power on Capitol Hill, this just might the year when a complete streets bill becomes the law of the land.

Spearheading the legislative effort is House Representative Doris Matsui (D-CA). Matsui addressed the National Bike Summit this morning to kick of the introduction of the Complete Streets Act of 2009 into the 111th Congress. (Matsui is one of the chief architects of the bill).

“Transportation should focus on all Americans, not just people who drive cars.”
— Rep. Matsui

According to Transportation for America, a “complete street” (as defined in the legislation) is one that takes into account all users of the street, not just those in cars. Matsui — a member of the powerful House Energy and Commerce Committee – sees the bill as a way to solve three main problems: congestion, poor health, and air pollution.

“Transportation should focus on all Americans, not just people who drive cars,” said Matsui to receptive applause. She spoke about how our transportation system must reflect that key American democratic ideal — choice. 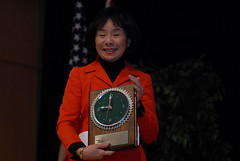 The League gave Matsui their Legislator
of the Year Award for her work
on complete streets.

Matsui talks about cars and our existing highway system (and the sprawl they have enabled) as if they’re an evil dragon that must be vanquished in order for peace and happiness to return to the kingdom.

Here are a few snips from her remarks:

“Our outdated transportation system fosters reliance on cars…we talk about an epidemic of obesity, and the way we design our communities is partly to blame.

“Complete streets can re-invigorate corridors that are currently dominated by cars. We should transform these areas that are really nothing more than highways superimposed on surface streets.”

Currently, federal law only recommends complete streets practices, but just a few states follow it (only 80 jurisdictions nationwide have officially adopted a complete streets policies). Advocates say the time is now to make this a federal priority.

Matsui said she’s optimistic that the political stars have aligned in this Congress. “We are finally in a position,” she said, “to make our complete streets vision a reality.”

Can someone link to a source that explains just what complete streets are? I’d like to know what design rules it imposes, whether it addresses zoning law, etc. It all sounds great, but without any details, I can’t form an opinion.

Peejay,
Complete Streets aren’t really supposed to be a design solution. It’s a policy that ensures whenever a road is constructed, reconstructed, widened, repaved, or otherwise improved, the planners, engineers, and decision makers begin with the assumption that all users of all ages and abilities will be using the road – not just cars. It’s very flexible and meant to adapt to various situations; there is no design prescription.

I just posted about this at Portlandize, with links to info about it:

The end is near! GM’s tradin’ at less than a cup of joe.

#4 – Way to cheer the demise of thousands of middle-wage U.S. jobs, disappearing for absolutely no good reason.