Getting pumped on urban trails and bike parks 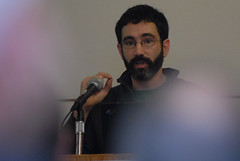 Most talk about biking in cities revolves around commuting to work and urban biking culture. But there’s another way to enjoy riding without leaving town that is just starting to get on the map in Portland — urban trails, jump parks, and pump tracks.

The topic is very hot in Portland right now. Our Gateway Green project is rolling along, and discussions are afoot for more bike access in Forest Park and possibly even our first pump track/skills park near the Burnside Bridge.

With all that in mind, today I sat in on a breakout session titled, Urban Trails and Jump Parks to learn more.

Rich Edwards, a “Trail Solutions Coordinator” with the International Mountain Bicycling Association, caught my attention when he said that studies have shown outdoor recreation is just as effective as drugs in curing depression. With BusinessWeek naming Portland the Most Unhappy City in the U.S., perhaps more riding opportunities would be just what the doctor ordered.

I also learned in this session that there are many ways to create fun places to ride in an urban context.

The first, and most obvious, are mountain bike trails. Unfortunately, urban mountain bike trails often come with a byproduct of controversy. Trails are popular with bikers, but also for runners, hikers, and equestrians. This means user conflicts are common — especially in places that have not planned ahead to accomodate the needs of different users.

What often gets lost in access wars, according to Edwards, is that trail design is often the culprit. “User conflicts are more about trail design than people just being angry,” he said. Edwards also mentioned that bike access works best when the trails are built specifically with bike use in mind. With a fresh slate, trail builders can do things like extend sight lines to at least 150-feet and create smooth switchbacks down hills instead of steep chutes.

Another way to create riding opportunities in a city is to build a pump track or skills park that might include jumps, berms, man-made features, etc… One unlikely place leading the way in creating these parks is New York City. 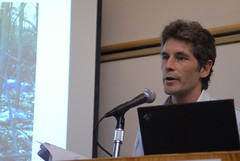 Michael Vitti, President of the Concerned Long Island Mountain Bicyclists (CLIMB, get it?), told us that New York City currently has three mountain bike parks and is adding a fourth soon.

Vitti said that the parks they developed used to be nothing but havens for drug users and prostitutes. “Kids wouldn’t go near the parks,” he said. Vitti made it his mission to develop riding opportunities for city-bound kids. He said it took him five years to educate and negotiate with the parks department before he finally made a breakthrough.

One of his big lessons, he recalled, was trying to pass the idea of “jump parks” by the city’s lawyers, who were afraid of potential lawsuits. “How can you possibly ask for permission to do something called a ‘jump park’?” So, Vitti began calling them “BMX skills development areas” and the problem was solved.

At times during his presentation Vitti sounded more like a social worker than a bike advocate. He said biking has been the way out of a life of obesity and crime for many kids in the neighborhoods where the parks are located. Vitti also mentioned that, unlike mountain bikes — which can cost nearly $1,000 for a trail-worthy model — BMX bikes are much more affordable.

Vitti also warned that pump tracks require a lot of maintenance. “Make sure you realize, this is an intense management situation you’re getting yourself into,” but, he added, “it’s a heck of a lot of fun and people that have fun develop a passion for it and they help maintain it for you.” 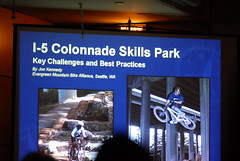 Slide from the presentation.

Last but not least in this session was a rundown of the I-5 Colonnadeproject in Seattle. This innovative bike park, created by the Evergreen Mountain Bike Alliance, was built under the I-5 bridge in the heart of downtown. This grassroots, community-driven effort has been a huge success. The trails, rocks, stunts, and other features attract riders with a wide range of abilities. And best of all, since it’s under the freeway, it’s protected from the rain!

I have been dreaming about a similar project to the Colonnade in Portland. We’ve got land under I-5 near the base of the hill on N. Albina Ave. Can you imagine having a fun riding session and then hanging out afterwards at Widmer Brewery or the White Eagle with a few friends? I sure can.

When it comes to urban off-road riding opportunities in Portland’s future, I hope it’s a matter of “when”, not “if”.

I am also excited about the possibilities of urban off-road riding opportunities in Portland. A skills park under part of I-5 near Albina would be amazing.

Portlanders are lobbying for Bikes in D.C.
In case you didn’t know it, I thought I’d let you know that there is a delegation of Oregonians in D.C. right now lobbying for

Great write up, Jonathan. It’s an uphill battle, but we have the people and the passion in Portland to make this happen. At this it is not a question of if, but of when.

Ultimately I’d love to see Portland have trail networks along the MAX routes. By that, I mean Portlanders should be able to jump on the train with their mountain bike, get off in Hillsboro or Beaverton ride miles of trails (xc would be my preference)and return home on the train. I hope this is not completely impossible. While I think that urban bike parks have their place (the bmx track kept me from getting into trouble as a kid) it doesn’t take the place of connecting with nature, and challenging our mountain skills in the same way that epic 4 hour cross country rides do. Austin has the Greenbelt trails, Minneapolis has Lebanon Hills, now it’s Portland’s turn. Just my two cents.

Are you listening, Portland Parks Dept?

we use the Colonnade as a major success story/ example in our Subaru/ IMBA Trail Care Crew Trail Building Schools. I would love to see Portland utilize some of that dead urban space, and become the next major success story. (Go Cedar!)

Yeah, I’m always amazed with the walls against this here in portland. I was just out at powell butte which is pretty MAX accessible and arguably the only singletrack “in town”, and left pretty underwhelmed. The progress that is happening with Forest Park is certainly exciting though!

Unless this has been discussed in a previous story, I can almost guarantee that most people reading this have no idea what a pump track is. I think that this is one of the reasons that it is so hard to gain momentum for this kind of thing here despite the huge number of “cyclists”. I get the feeling that skill-based riding is as foreign to most Portland cyclists as golf. Just because because we are all on two wheels, doesn’t mean that we have anything in common.

Yes, actually this has been discussed in a previous story

I was one of those people that had no idea what a pump track was until a read that story.

You can read it in this February 24th, 2009 BikePortland article here: *What is a pump track?

Interesting story and hopeful examples. Our situation of demand growing before access is available is not unique, and others find solutions (other nice examples include Salt Lake City, Philadelphia, and Detroit).

I don’t think the comment about trail design is relevant to Forest Park – it’s trails, while not perfect for either pedestrians or cyclists, are comparable to many of the regional cycling trails in construction and design that function well – with ongoing TLC, of course.

From what I have heard from opponents, our issue does seem to be primarily one of sharing access.

As an asside, regional cycling trails have from virtually no line of sight (Scappoose, Brown’s Camp, sections of most other trails) to views of miles, and both are fine. Additionally most shared city park trails around the country have travel in one direction.

Vote Up0Vote Down  Reply
« With Complete Streets, Matsui says roads will be for everyone
What special interest lobbying is all about »