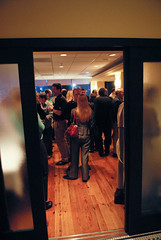 Through this door to the
world of lobbying.
(Photos © J. Maus)

Last night I experienced an important part of how special interest lobbying works. At a classy restaurant just steps from Capitol Hill, I joined bike industry and advocacy leaders for a reception (and dinner, but I didn’t stay for that) hosted by BikesPAC.

BikesPAC is a political action committee founded by the non-profit Bikes Belong Foundation that raises money from donors and then spends the money on congressional campaigns of members that are supportive of biking. Each year during the National Bike Summit, BikesPAC hosts a reception and dinner and invites members of Congress to stop by. The idea is to share with them what the Bike Summit is all about, give thanks for their support of biking, and generally just try to strengthen the name of biking on Capitol Hill. 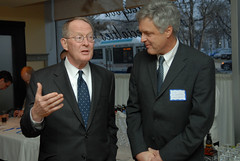 Bikes Belong Executive Director Tim Blumenthal served as the night’s host (a job he did with much aplomb). As the members arrived, he would tap a glass to gain everyone’s attention and we would all gather around while he introduced us to the member. At that point, each one of them shared a few words. In all, six members of Congress stopped by the event. They were; Sen. Lamar Alexander (R-TN), Sen. Tom Udall (D-NM), Sen. Arlen Specter (R-PA), Sen. Jeff Merkley (D-OR), Rep. Doris Matsui (D-CA), Rep. John Mica (R-FL).

Our first guest was Senator Lamar Alexander. Sen. Alexander shared a story about how he walked 1,000 miles across Tennessee in 1978. “I watched out for big trucks, dogs, and ligthtning…sort of like you guys do huh?”, he said. “Did you ever think of doing it on a bike?” someone asked. “No,” he replied, “but maybe I should have.” 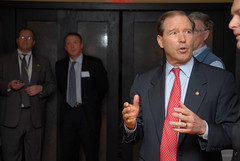 Sen. Tom Udall from New Mexico was next to join us. He cheerfully recalled riding his bike with Lance Armstrong in the last leg of the Tour of Hope charity ride. He encouraged the crowd to tie in their advocacy efforts with the energy debate. Udall also expressed a lot of support for bikeways, saying that all roads should be bike-friendly and that “We should put the money in to do it right.” 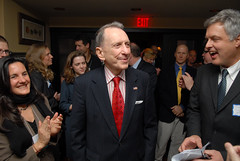 Next up was Senator Arlen Specter from Pennsylvania. After playfully chastising Tim Blumenthal for not inviting President Obama to the event, Specter told us an anecdote about being a bike messenger when he was a boy in Kansas. “I’m very fond of my recollections of bicycling.” he said, “it’s a great sport.” Being from the right side of the aisle, Specter said he has taken a lot of heat from fellow Republicans for supporting Obama’s stimulus plan. “If you want a bike advocate in the Senate,” he told us, “I’ll need your support on this.” He also said he plans to be a co-sponsor on the recently introducted Complete Streets Act. 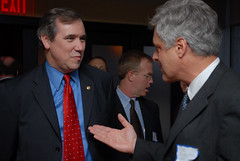 It was a pleasant surprise for members of the Oregon delegation that were present when rookie Senator Jeff Merkley showed up. He told us, that as a 19-year old Congressional intern, he would bike into the capitol and went six months in D.C. without even owning a car. Merkley also remembered his time in Portland’s West Hills, racing quarter-midget cars at Alpenrose Dairy, “I would go over to the track [velodrome] and tell my dad, ‘that’s what I want to do!'”. 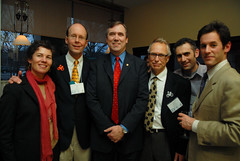 When he left the reception, all the members of the Oregon delegation that were present took the opportunity to get a group photo with him. BTA Executive Director Scott Bricker also made a point to thank Sen. Merkley for his support of the Vulnerable Roadway Users bill, which he voted for as Speaker of the Oregon House. 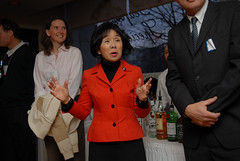 Rep. Doris Matsui from Sacramento California, who had opened the Summit with a keynote about the Complete Streets Act, was next to stop by. She re-iterated her “our highway system is broken” mantra and said about the upcoming authorization of the transportation bill, “We’re going to write a transformational bill…and you’re going to be a part of something big.” 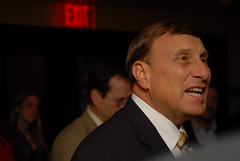 The last member of Congress to make it to the party last night was Rep. John Mica from Florida. Mica is the House Minority Leader of the all-important Transportation and Infrastructure committee. He shared candidly that, while he and Rep. Earl Blumenauer “have our disagreements from time to time,” he is supportive of biking. Mica boasted that Florida leads the nation in rail-trails and then said in a self-deprecating tone, “That’s pretty good for a right-wing, knuckle-dragging conservative.” On that note, Mica said that as a Republican he has to support biking “quietly”. “I did a path over an interstate years ago,” he said, and then began to smile, “but we didn’t send out a press release on it.”

The evening was interesting and exciting (in a, “Wow. This is how our democracy works?!” sort of way). One thing that will stay with me after being there is that several of the members seemed sincerely appreciative, not just for the invite and thanks they received, but for the work of the advocates in the room.

Sen. Udall said, “Don’t just elect us, constantly hound us. A democracy only works when you stay involved.”

Speaking bikes in front of City Council, one Councilor asked if I biked to the meeting.

My answer could have been very embarrassing to the cause, especially televised.

BTW, how many bikey peeps biked to da Summit?

I can’t underestimate the importance of Arlen Specter being at the lobby-fest. He is the 2nd ranking member on the Senate Appropriations committee and in Pennsylvania he is known as the ‘un-republican’, ie he is not a party hack.

Actually it sounds like the two most important legislators there were Republican. Isn’t that ironic?

Specter is also a member of the Subcommittee on Transportation, Housing and Urban Development, and Related Agencies

interesting, thanks for the context, KWW.

Great and encouraging story. Gives some hope about our country and democracy. Maybe there is something to that change we have been hearing so much about.

Gawd, this is just sad. “This is how a democracy works” Really?? Democracy works through paying, oops, sorry, “supporting” politicians with money so that they’ll advocate for your cause?? This type of advocacy-for-cash is exactly why our political system is broken, and serves only the wants of the rich.

Yes, this time it’s a good cause, but tommorow, I’m sure those very same senators will be meeting with oil lobbyists, weapons manufacturers, and wall st. executives, each with deeper pockets than BikePac. And guess who they’ll be listening to in our great “bribe-ocracy”?

“Mica boasted that Florida leads the nation in rail-trails” I really have mixed feeling about this comment. I enjoy the rail-trails in my area, but it usually does not take me were I want to go. I also worry that rail-trails are often used as an excuse to exclude bicycles from transportation planning.

I’ve never been to Florida, but I’ve seen reports about the horrid conditions and treatment cyclist get there. The Springwater Corridor is a great trail, that I find useful. But many rail-trails across the nation are not ideal for daily transportation needs.

We didn’t set this system up – it was here long before we got here. The awesome thing is that Bikes Belong has gotten industry money together to set up a pro-bike money train.

Bike projects are so cheap (relative to other transpo. projects) that we might have a hope of getting something done quickly to improve cycling nationwide.

Just in time for an energy crisis!

Truthfully though, as encouraging as the caliber of attendees was, from reading their comments it doesn’t seem to me that they actually understand any of this. In attempting to identify with the audience there, they kept repeating the “bicycle-as-sport”, or the “bicycle-as-recreation” view; I rode with Lance…I want to be a track racer when I grow up.

What about the “bicycle-as-a-legitimate-form-of transportation-on-public-rights-of-way” view? That’s the message I want to hear from them!

When I begin hearing that message, then I’ll believe they understand.

Chapeaux à Merkley! It sounds like he’s got it right.

Oh, solid gold (#8), I am so with you there. I would be more than happy to see my personal pet causes go without this sort of lobbying if it meant the corruption and fraud as it exists today got stamped out.

As it is, I despair that I will see that happen in my lifetime.

KT, you’re absolutely right. I have been thinking a lot about that, it just didn’t fit in this story.

There are very very few people on Capitol Hill that really get how bikes are not just a recreational thing or a sport, but a viable option to the automobile for short trips.

And Solid Gold, I hear where you’re coming from. I didn’t really communicate myself well. I changed that sentence to better reflect what I was thinking. My statement was both one of realization and of surprise.

not sure I agree w/ comment 11, good thing bike “industry” money is a force on the Hill. bike industry is more about sidepaths than it is about transpo. industry money has begun to change the agenda at LAB as well.

PACs & lobbyists need to be eliminated before I can legitimately consider the US a democracy.

However, given the “bribocracy” paradigmn that does exist, I am very happy to hear that bicycling infrastructure has a voice (and duckets).

Let’s start hounding them for an actual democracy, too!

Salem and OKC don’t always get bicycles as transportation either. The REAL geniuses of bike transportation are actually the local City Council, especially if one of them happens to be non-spandexed, rolling with the right sock over khaki slacks, and old skool bell helmet.

So, why expect the sky, the moon, and the stars from D.C.?

#15 (“are”), you got me w/ your line saying that the industry money has begun to change the agenda at LAB. I’m sure that could be true, but what do you mean? Can you give me some examples; good/bad? I just joined LAB. You have me second guessing now…