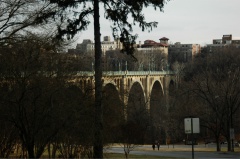 You can take a shuttle between conference
venues, or a ten minute walk across this gorgeous
bridge on Connecticut Ave.
(Photos by Elly Blue)

Washington, DC is the final stop on my East Coast Tour. I am here for the week-long Transportation Research Board (TRB) annual meeting.

TRB is the big transportation conference in North America, hosted by the country’s pre-eminent transportation research organization. Hundreds of sessions fill three huge hotels on Connecticut Avenue, and 11,000 attendees walk briskly from room to room, talking shop about everything from bituminous pavement to international shipping to pedestrian signalization.

The theme of the conference this year is Transportation, Energy, and Climate Change. The fact that this is the theme is a big deal in its own right, as it signals a shift in focus in transportation research and policy nationally. 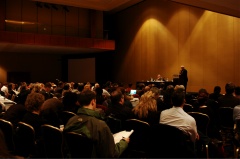 The Transportation and Climate Change session was standing room only, even after more chairs were brought in. (Photos by Elly Blue)

This afternoon, I sat in on a featured session on Transportation and Climate Change. The first speakers were members of the TRB’s special committee on climate change, and they were presenting the results of a study they have recently completed. The report’s focus is less on prevention, which the authors pointed out is a well covered topic, and more on managing what are by now inevitable outcomes of climate change on our transportation infrastructure and behavior.

“‘I would redefine defense today as defense against climate change,’ Frankel said. It is as serious an issue for us now as the Cold War was in Eisenhower’s time.

The first speaker, Emil Frankel, the chair of the committee, spoke about the urgent need for across the board reform of how we design, build, and maintain transportation networks. For that reform, he said, we will need a national consensus. And the last time we had a clear national consensus on transportation was on the building of the interstate highway system. More accurately known as the “Dwight D. Eisenhower National System of Interstate and Defense Highways,” our nation’s highways were built so that troops and supplies could be moved quickly from coast to coast in the event of enemy attack. “I would redefine defense today as defense against climate change,” Frankel said. It is as serious an issue for us now as the Cold War was in Eisenhower’s time.

Bicycles fall under the prevention category, which would explain why there was no mention of them. But I couldn’t help thinking that we will experience the effects of increased flooding, excessive heat, and “intense precipitation events” on our road networks just as fully on bicycles as in cars. Land use kept coming up as a big part of any solution, and I suspect that proximity and access issues will be just as important for maintaining bicycle infrastructure as for any other kind.

I left this session to catch the tail end of a series of talks on social justice issues in land use and transportation. One speaker, Marc Brenman from the Washington State Human Rights Commission pointed out that since African American households are the least likely to own a car, every public dollar spent on car transportation is inherently biased against a sizable part of the population.

Another speaker, Todd Litman of the Victoria Transport Policy Institute, discussed the oft-neglected economics of happiness. Apparently people’s happiness goes way up when they move from true poverty to middle income, but after middle income happiness depends much more on relationships, friendships, and stress (including commute stress) than on money. “We [proponents of density and sustainable transportation] deliver more happiness than the competition,” he said. “We just have to figure out how to communicate that.”

Amanda Thompson, a planner with the city of Decatur, Georgia, which has recently had successes with smart growth development and a new planning policy that prioritizes bicycle over car infrastructure, had a partial answer to that: Dense developments lower the local government’s costs. Getting utilities out to suburban areas are a huge drain on town coffers. Health care is harder to quantify, but she pointed out that if the infrastructure is there as well as the density, we would not have to spend so much money at all levels of society treating preventable diseases.

This week I’ll attend many more sessions, take a bike tour of DC, sit in on a luncheon talk by a Vice President of GM, have drinks with a group of young transportation professionals, chat with folks I meet in the lobbies, and tell you all about it from the free wifi hotspot here in the Omni Hotel lobby.

I am also still working on writing up stories from three cities I visited in the past week, so keep an eye out for those on my travel page. Not everything I’m writing on this trip ends up on the front page — so you may have missed my dispatches about a groundbreaking Complete Streets law in New Haven, a sad memorial in DC, and a few more.

Great article, Elly! I really appreciate the big-picture type coverage that is coming from your East Coast trip.

Elly you are fantastic. Great job covering the changes in thinking.
I don’t believe bicycles will be part of the national transportation discussion anytime soon because they’re alternative and also because it’s harder for corporations to make big money from them.

It’s great to hear that Todd Litman was there. He’s a great advocate and you should check out the VTPI website.

I am the Marketing Director at Bike and Roll Washington DC, through which Jim Sebastian arranged rentals for the ride during the TRB conference. Just wanted to say that I hope you enjoyed your tour of the city by bike!