[BikePortland.org’s Managing Editor Elly Blue is currently on an East Coast Tour. This is the latest dispatch from her trip.] 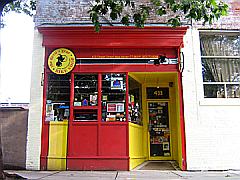 The Devil’s Gear is a focal point
for New Haven biking.
(Photos by Elly Blue)

When I lived in New Haven a decade ago there wasn’t much of a bike scene. People biked, as did I — but I never had the sense of being part of a movement, or a community, or that bicycling was anything more than a fun but somewhat embattled way to get to work.

Biking was already starting to get big in 2003 when Elm City Cycling, an activism, advocacy, and community-building organization, was formed. Yale University, a major social and economic force in New Haven, began to promote bicycling. More organizations formed, from the New Haven Bike Collective which refurbishes old bikes for low-income people to the beer-swilling, freakbike welding Elm City Scorchers. Critical Mass rides year round, sometimes attracting hundreds of participants. There are a couple of local bike-related blogs now as well, WalkBikeCT and Bike New Haven. And more people are out there riding bikes, even in the dead of winter during college break, than I’ve ever seen here before.

If there’s a geographic locus of the New Haven bike scene, it’s the Devil’s Gear Bicycle Shop . About the time I was moving to Portland, my friend and former mechanic Matt Feiner was opening this shop an out of the way corner of downtown New Haven.

Unlike the few other bike shops in town, the Devil’s Gear caters to commuters and utility riders as well as the more traditional racing and recreational clientele.

Matt, the owner, has been a racer for much of his life, but has long used a bike as his primary transportation as well. “That’s the key to success,” Matt said when I commented on the shop’s focus on utility cycling. “That, and being open all the time.” 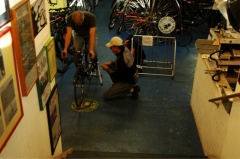 A bike fitting in the Devil’s Gear basement.
The shop’s signature pennyfarthing
is in the background.

Matt was doing a fitting with a customer when I came in, so I chatted with the other three guys working there, and got to know Monk, the helpful shop dog. One mechanic, Skyler, is from Portland (he used to work at the Community Cycling Center) and is moving back this summer.

The Devil’s Gear has had a roller coaster year, with things going up and down right along with the economy.

The store has been popular as New Haven’s population has increasingly embraced bicycling. In February of 2008 they had a ribbon cutting on a second shop, the Devil’s Gear II in a more prominent downtown location that they rented from Yale University (Yale owns much of the property in the center city).

Yale wanted to have a ribbon cutting, and Matt asked them to invite Mayor DeStefano to do the honors. His contact at Yale laughed this off, but Matt said “Ask him, he’ll be there.” And he was.

At the opening, DeStefano gave a nice speech, and hung out afterward eating cookies with everyone. He told the story of Matt walking into his office several years ago and telling him, “With all due respect, bicycling in your town sucks.” Since then the city and Elm City Cycling, the main advocacy group in town with which Matt is associated, have worked together closely with strong results.

Last summer the economy was booming, gas prices were high, and both shops did incredible business. They couldn’t keep stock on the shelves, their distributors were running out of basic things like locks and tubes, and things were looking rosy for both shops. 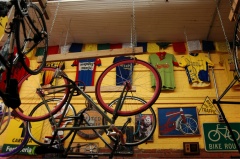 There’s a lot to look at on the walls:
Vintage jerseys, classic bikes,
signs, photos, articles

Yale asked Matt to move the second shop to a larger space nearby, and he moved in August, happily paying the higher rent and taking on an extra staff person; around the same time he put in a big order for bikes at their original store.

Then came October. All at once the economy tanked and gas prices went back down, and “from one day to the next” Matt knew his business was in trouble. The Devil’s Gear II closed a month ago, on December 1st, Matt’s birthday.

His original store is still going strong, despite this setback. They put flyers on bikes all over town, host events, show up everywhere, and generally manage to keep in the midst of all things bikey.

Matt’s goals for 2009 are to “sell bikes and promote bike culture.” In practice, this means more rides and more repair classes — education and building community.

Brings back good memories of my time in New Haven, helping get Bike to Work breakfasts rolling, Arts & Ideas rides, Sunday Lulu’s rides, etc.! Matt and ECC are a force in the town.

That’s got to be disappointing to the owner that the second Devil’s Gear store seemed to take such a blow from the changing season and a return to cheap gas. Maybe there’s more to the situation than that.

Should be interesting to see what happens as we move out of winter into spring; will gas prices rise again dramatically? Is the economy going to move into an upswing? Will people have decided since last spring that it’s nice to be riding along to your job on your own power, even if gas is affordable again? No one can tell yet how many bikes will be out on the roads this year.

steve, you’re starting off the year in fine form!

Bob, I think the thing that really sealed the demise of the second shop was that they’d just taken on the extra cost of the move, the considerably higher rent, and a new staff person, on top of everything else.

Elly, of course that’s true, but it seems like the owner started his business in Feb 08, due in part to his own confidence that gas prices would stay high. Their drop is probably the single biggest reason his business saw such a dramatic change.

People’s reaction to winter weather is predictable. If anything, the flagging economy probably is still making bikes a very attractive transportation alternative. If the owner could have held on for a couple months, until March, business might have started picking up again. I’ll be surprised if these gas prices stay low, even if the economy continues to suck.

Anyway, appreciate your reports from the East Coast! Thanks.

wsbob, don’t let the price at the pump fool you, oil supplies are even leaner now than they were during the price spikes. Right now the problem is masked by a damaged economy which has put a damper on demand. As soon as the fear wears off people are going to start spending all that cash they have taken out of the market, then fuel prices are absolutely going to go crazy – which is exactly what popped the bubble last time around. I expect the inflation problem will be pretty severe in the long-run, especially if the dollar looses reserve-currency status.

Elly, if you are still headed north on your tour gives us a shout when you get to Maine.

I wish I were headed to Portland east — but it’s back south for me, New York tomorrow, then Baltimore, then DC.

It would be great to meet the folks that my google searches about Portland bicycling always turn up!