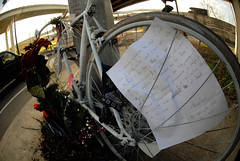 This ghost bike was stolen, then
returned by a regretful thief.
(Photos © J. Maus)

Looking back at the 1,385 stories published on BikePortland.org in 2008, we thought it would be fun to take a look at the ones that you read the most. I looked up our top ten stories by total number of pageviews* and here’s what I found (some results I expected, others surprised me).

1. Man on a bike is tackled, then tasered by Portland Police (6/11/08)
This unfortunate incident was by far the biggest story of the year. It was picked up by local and national media and created a huge buzz across the Web. By the way, the civil criminal component of this case will go to trial in mid-January.

2. Road rage incident sparks media frenzy, spurs us-them mentality (7/10/08)
Opening with a photo of the Oregonian front page headline “Cyclist clubs driver with his bike,” this story was my response and analysis of the impact of mainstream media coverage on stereotypes and conflict on our streets.

3. Ghost bike returned, thief ‘truly sorry’ (02/15/08)
A strange story of sin and redemption. A man steals a ghost bike and then returns it, along with a hand-written mea culpa letter.

4. Updated: Arrest made in NE Portland hit and run (05/10/08)
This article details the tragic crash that occurred when Jeremy Jordan, driving while drunk, stole beer from a convenience store, drove away quickly, then hit Eric Davidson who was bicycling past (and also drunk). The collision caused traumatic brain injury from which Eric is still struggling to recover. 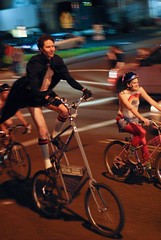 The 2008 World Naked Bike Ride
was a hit, both on the street
and on the web.

7. Time in the saddle means time off work for local company (06/10/08)
This write-up of Portland-based component manufacturer Chris King has made waves around the web. The company has an aggressive program to encourage their employees to bike to work.

9. A naked ride for the ages (6/16/08)
No surprise here. Naked ride stories are always popular — both on the web and in real life. In 2008, Portland’s Naked Bike Ride turned out to be the largest in the world. It was a massive gathering that many think might have been the largest unorganized group ride in Portland history.

10. The Trek Stop: A Qwik-e Mart for bikes? (07/01/08)
The main reason for this story’s popularity was that it was picked up by several social media, link-sharing websites (not to mention it’s a very novel and exciting concept).

It’s interesting to see the stories that were viewed the most in 2008. Remember, popularity is not always related to newsworthiness. For a look at the big news that really mattered this year, stay tuned for my annual “Year in Bikes” review (see the 2007 version here).

I’m also working on a slideshow with my best photos from 2008.

And, if I don’t get a chance to say it before midnight tonight… Happy New Year!

It would be interesting to see which stories generated the most chatter in the replies and pingbacks.

and a Happy New Year to you and your family, Jonathan. Thanks for the highlights.

Thanks for providing interesting and insightful articles on such a broad array of topics!

Happy new year guys. Here’s some funny reading for the first day of the year.

PDX WNBR unorganized??? MY ASS! You guys got it down to rocket SCIENCE.

That was definitely not an “unorganized” ride. I can point you in the right direction if needed.
4 articles a day. impressive.

i realize it was not completely “unorganized”. What I meant was that it was not a typical event ride with registration, etc… I wanted to differentiate it from Bridge Pedal, Tour de Fat, etc…