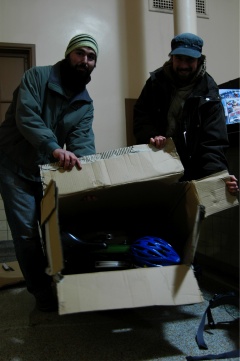 I’m beginning to realize a few things about traveling with a folding bike.

First of all, it’s definitely a passport to general goodwill and friendliness. I had a great time chatting with a homeless guy and a college student on the L’s blue line last night at 1am. It’s hard to imagine the three of us in that circumstance getting into a friendly conversation without the Brompton.

It’s also because of the Brompton that I met Marc and Sheri, Portlanders headed out on a month and a half long east coast train trip of their own. We soon found we had friends in common (Sheri worked with Sara Stout on the Share the Road mural that Jonathan covered back in 2006). They were excellent train companions.

I met them before leaving Portland, when Marc was gawking at the Brompton as I discussed my options with the baggage clerk. Due to poor planning on my part I needed to check something, and with some trepidation I chose the bike. I was given a regular sized bike box, a box cutter, and some tape, and Marc kindly stepped up to lend a very welcome hand to the project. 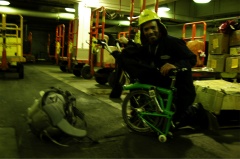 Three days later, our train arrived in Chicago at midnight instead of 3am, and I undertook a voyage into the bowels of Chicago Union Station to reclaim my steed. My appointed guide, Rick, was thoroughly wowed by the bike with a true engineering geekery that enabled him to give me pointers as I awkwardly unfolded it. After posing for a photo, he gave me directions to the blue line, a fare card, and a kiss on the hand.

Since then I’ve realized that the Brompton is my lightest and smallest piece of luggage, and I’m going to repack my bags today so that I can carry it onto the train with me.

I also realized that since the bike was in a non-bike shaped box, there was no reason to charge me $5 to check it — except that the baggage handler happened to know it was a bike. Go figure. I’ve heard of this happening before on Amtrak.

My suspicion that the Brompton might smooth my way on the road was right on the mark. Generally when traveling I’ve met up with generous, interesting strangers — but having a bright green folding bike definitely helps.

Elly, The folding bike thing works for me too. It is amazing how many people are interested in bikes when you take them with you. I use a locally made Bike Friday tikit – made in Eugene. I’ve actually got documentation that says a folding bike is fully allowed and doesn’t accrue any additional charges. http://preview.tinyurl.com/foldingbikesonamtrak

Bureaucratic logic is dumbfounding, sometimes. I’ve flown with a full-sized bike, broken down to fit a non-oversized piece of luggage. Most of the time, I checked it and it was fine. However, the last time, I ran into a very officious lady at the Northwest counter in Narita airport who insisted I pay $130 because I volunteered that the luggage contained a bike. No amount of arguing that I didn’t want any special handling, nor did my reminder to her that I fly that route frequently and have a choice in airlines would dissuade her.

Just an update on the Chicago to DC leg of the trip. I forewent Rick’s kind offer of boxing assistance, and carried the bike onto the train. Far from being turned away trainside as I’d feared, the attendants were falling over themselves to help carry it.

Getting a little bolder. Paul, thanks for the link — that could be premium info to whip out some day in the very near future.

i was happy to read that you, too, got to experience the friendly folks down underneath union station in chicago. i’ve been the same place myself with a newly constructed freak bike i’d built with the chicago sweethearts. they were more than happy to help me fit my strange bike into a box…i was quite happy! i am enjoying reading about your trip, enjoy yourself!

Folding bicycles may be brought aboard certain passenger cars as carry-on baggage. Only true folding bicycles (bicycles specifically designed to fold up into a compact assembly) are acceptable. Generally, these bikes have frame latches allowing the frame to be collapsed, and small wheels. Regular bikes of any size, with or without wheels, are not considered folding bikes, and may not be stored as folding bikes aboard trains.

You must fold up your folding bicycle before boarding the train. You may store the bike only in luggage storage areas at the end of the car (or, in Superliners, on the lower level). You may not store bikes in overhead racks.