“I will work to provide states and local governments with the resources they need to address sprawl and create more livable communities.”
— President-elect Obama, in a letter to T4 America

President-elect Barack Obama has responded to an online petition circulated by national advocacy group Transportation For America (remember them?).

T4 America reported on their blog today that 3,300 people signed onto a petition that was delivered to Senators John McCain and Barack Obama before their final debate back in October. The petition urged them to tell T4 America their plans for, “keeping America moving and creating new jobs by investing in our critical transportation system and infrastructure.”

Here’s a snip from the petition letter:

“We need our next president to lead an initiative to invest in public transit, high-speed trains, places to bike and walk, and green innovation. We need a president with a plan that can put millions to work in jobs that can’t be outsourced, bring down the costs of travel, and create a sustainable infrastructure that will keep America on the cutting edge.”

And here’s how President-elect Obama responded (emphasis mine): 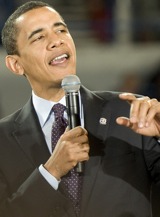 “…Everyone benefits if we can leave our cars, walk, bicycle and access other transportation alternatives. I agree that we can stop wasteful spending and save Americans money, and as president, I will re- evaluate the transportation funding process to ensure that smart growth considerations are taken into account.

I will build upon my efforts in the Senate to ensure that more Metropolitan Planning Organizations create policies to incentivize greater bicycle and pedestrian usage of roads and sidewalks. And as president, I will work to provide states and local governments with the resources they need to address sprawl and create more livable communities.”

Unfortunately, Obama wrote these words before he was elected. Let’s hope that he stays true to these words as he and Congress hammer out the 2009 Transportation bill…and if he doesn’t, we’ll respond with more than just an online petition.

But I though everyone benefited if we bought more cars…???

We need cars to get to work at those bicycle factories

He wants to give 25 billion to the auto makers.

Anyone want to bet if Jesus ……I mean Obama…..will fund non motorized transportation to a equal amount?

The sad truth is that Bush and the republican congress probably spent more than these guys will and that is only because their spending was completely out of control in general.

At the end of the day I do not actually think that Obama is paying us anymore than lip service much like any politician would.

All (almost) say how great bicycling is etc. etc. etc.

Bail out GM!!! Lets hope the next stimulus package (money from China!) comes with a stipulation that we all have to use it to buy a new GM complete with payments!!

Why are all the early posts (typcially) so cycnical?

Jim, I get what you have against light rail but what is the problem with bikes?

dont’ kid yourself, Jim, you’re too good to work at a dirty bike factory…

I’ve never seen a quote saying that’s what Obama wants. Are you sure?

The automakers applied to Congress for that funding, their second round, and weren’t well-received after showing up in private jets “for security reasons” (they said). They already had $25B earmarked as part of the bailout plan, but aren’t having much luck getting more (as reported in last night’s news).

China already owns around 70% of US debt. One of the reasons for this economic meltdown is that international flow of money into the US (especially when the dollar was depreciated) has stopped.

I agree with you on the lip-service thing, but standing on front of the nation saying we should be conserving energy is a far sight better than standing in front of the nation saying we’re personally responsible for high unemployment because we have to go out and consume more in order to keep the economy growing. While a president has little control over the many factors that drive legislation and policy, he indeed has the loudest voice in setting agenda and direction.

Lip service or no, at least he speaks the truth on this issue. In public. And I’m not even a big fan of Barack H. Christ…

Living in an Obamanation I will be most certainly be cynical. What else is left? I guess at ths time prayer