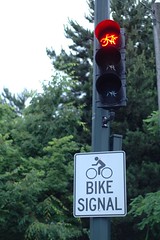 New gadget fools the light
into thinking your bike is a car.
(Photo © J. Maus)

Have you ever biked up to an intersection and had the sinking feeling that the traffic signal sensors don’t know you’re there?

A new gadget (that’s still a prototype at this point) just might solve that problem. Here’s the news from Wired Magazine:

Richley spent a decade lugging an oscilloscope to intersections, measuring the signal voltages to determine what kind of signal the loop sensors used. He discovered that they vary, “so I came up with a technique that scans for frequency and accommodates the pulsed mode of modern sensors,”…Push a button and Richley’s gadget creates a brief, but strong, magnetic field that simulates the presence of a much larger conductor — say, the body of a car — and triggers the inductive sensor that lets the light know a vehicle is waiting. 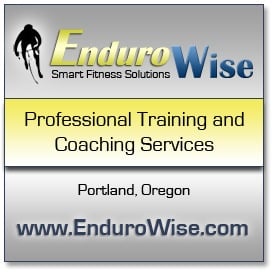 Thankfully in Portland, many of our lights are built with sensitivity to bicycles in mind. A few years back, we shared a how-to guide from PDOT on how to use the bike-sensitive loop-detectors that are installed in most of Portland’s intersections.

For more on Ed Richley’s Traffic Loop Sensor Activator, check out his how-to on Make Zine.

Infrastructure, Signs and Signals, The Newswire

oh god one of these would be nice. especially for the intersection at mlk and tillamook. I hate the wait on that thing.

Most intersections in Portland require that you activate the loop detector, and then stay there until you get your green, and if you move, (or this device only generates the magnetic field for a second or two,) then the traffic signal cancels your request.

I believe that the city could make it so that they don’t cancel the request if the magnetic field goes away, but it would slow down traffic, (every time someone turns wide, it would trigger the light cycle,) and so the city would rather get the loop sensitivities right/mark the bike friendly locations on the street…

Or they could just adjust the sensitivity so that all legal road vehicles are detected by the sensors, like the law requires. I can just imagine if the lights were set so that only buses and semis had enough ferrous mass to set off the sensors and “just” cars had to buy or build a device that triggered the sensor, or get out of the car to push the walk button in the rain what car drivers would be saying.

I agree Chuck. The wait is horrible!