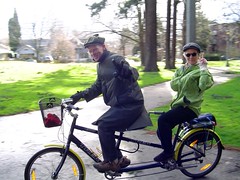 BTA co-founder and Metro Councilor Rex Burkholder and his partner Lydia Rich (a public school teacher in North Portland) have made a commitment to Portland State University’s growing reputation as a hub for livable cities research.

In 2007, the couple established the The Rex Burkholder and Lydia Rich Scholarship. The $5,000 prize is awarded to a graduate student who “intends to be active in developing a future where bicyclists and pedestrians play a major role in the livability of urban areas.”

According to the annual report of PSU’s Initiative for Bicycle and Pedestrian Innovation (IBPI) (you can download it here), the first recipient of the award was Dana Dickman. Dickman is studying the relationship of proximity to pedestrian, bicycle and transit facilities with household transportation costs.

In an email over the weekend, Mr. Burkholder wrote that he and Ms. Rich started the scholarship, “as a challenge to PSU”. Burkholder said he wants PSU to boldly claim that they are the premier place to study biking and walking in the U.S. He also hopes that scholars take their knowledge beyond Portland’s borders, writing that, “it does us no good to be a livable place if the rest continues to sprawl and be car dependent, right?”

One PSU researcher, Jennifer Dill, has already made headlines for her pioneering work on using GPS to analyze route choices made by people who ride bikes.

Makes me want to go back to school! ­¤śē

I would love if PSU had more bike racks and covered racks. I have to search far and wide to find either.

I figured since PSU is the biggest university in Oregon located in the heart of Bike City USA they would be more supportive of creating an stronger infrastructure that is supportive of commuting by bike.

Way to challenge PSU, from my experience their as a cyclist, they need it.

I’m sure that PSU could use more bike racks, covered ones too, but they already have a lot of both. And they’re not hard to find either (if you’ve been searching “far and wide”, try searching on campus instead). I’ve even taken photos of them and shown them to the facilities managers at my place of employment.

Nice photo of Rex and Lydia. Sadly, no helmets in sight. I’ve been watching Rex ride his bike through Portland for decades and have never seen a helmet covering his head yet. Too confining, maybe? Perhaps a grad student can figure this one out.

Hmm…this flies in the face of Burkholder’s embrace of the Columbia River Crossing (CRC).
$5K a year vs $4+ billion (in today’s dollars) for a bridge that encourages single-occupant vehicle commuting and defies the fact that we need to do something about the air pollution and health problems caused by all these commuters? Oh, big deal, Max is proposed for the bridge — ending at Washington! First we have to get Vanlosers to approve developing and spreading light rail on their side, otherwise, what good will it do? And don’t count on that happening. Vanloser’s mayor wants it — in a minimal way — just so that he can get his bridge.
We cyclists, pedestrians, public transportation users and sometime drivers don’t stand a chance of offsetting the destruction the CRC will cause. This community would be better off if Burkholder and Rich donated the $5K to the cancer society.
Burkholder has betrayed our trust and I sometimes question his sanity.

[The $5,000 prize is awarded to a graduate student who ōintends to be active in developing a future where bicyclists and pedestrians play a major role in the livability of urban areas.ö]

In advance, my apologies for the off topic comment.

Andrew:
Thank you for your challenging comments! I’m very sorry to hear that you’ve had difficulty finding bike parking at PSU. I want you to know that we are currently working very hard to add more bike facilities on campus as quickly as possible. I would suggest that you try parking at either the Millar Library (where 20 new bike racks were installed last week) or perhaps Neuberger or Cramer Hall (15 new racks added at each). If you are specifically interested in covered bike parking, then I would suggest you consider becoming a member of the PSU Bike Co-op, where you can park your bike in a secured (and covered) area during daytime hours (for more info visit ).

You might also like to know that our plans to significantly expand the PSU Bike Co-op are moving forward. By fall of next year, we hope to open our new facility that will include significantly more space for our popular programs, as well as indoor, secured bike parking with 24/7 access to members. Additionally scheduled for next fall is the opening of our first bike garage — another secured facility located just north of the PSU Library.

If you would like discuss your particular situation in more detail, or perhaps get involved in helping to make PSU an even better place for those who choose to bike, please feel free to contact me directly. Your help would be greatly appreciated.