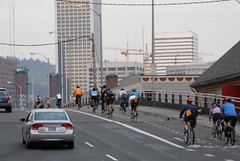 I gave you a little sneak peek last week, but now PDOT has released their full, 29-page, 2008 Bicycle Count Report (download the 11MB PDF here). In general, biking is way up all over the city. That’s not exactly earth-shattering, but some of the numbers and findings are quite interesting.

I don’t have time to get into many details, but below are the highlights.

And check out the spike in bike traffic (at left on graph below) at SE Harrison and Ladd Circle. 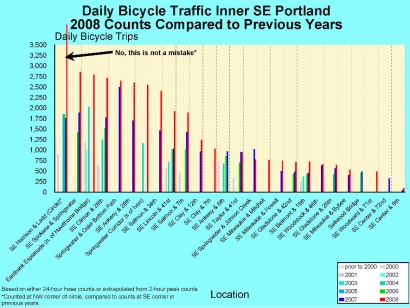 Is it time to demand more than our paltry 1.5% funding? I think so.

There are six “lanes” on the Hawthorne Bridge, the two sidewalks plus the four car lanes. Presently bikers and pedestrians get 2 of the six lanes, or 33% of the available right of way on the Hawthorne Bridge. If we were to take a lane in each direction we’d have 66% of the capacity of the bridge, which is in no way close to the amount of capacity we use.

There are two upcoming projects that would add additional capacity for bikers across the Willamette. 1 would extend the sidewalk on the Morrison in order to make it a bikeable bridge, which is supposed to be an imminent project (though it probably won’t get done till Adams takes office). The other project is the new MAX bridge that will cross at OMSI… it will have a ped/bike only section on it.

The reason I mention these projects is because that they’re not done deals yet, if the community pushed to get these projects done it would be a net benefit to us and it wouldn’t get the driving public riled up because we’re not taking existing capacity from them. Reducing the Hawthorne to two lanes would be an immediately obvious (and inequitable, considering the traffic count) move that would almost certainly create animosity and decrease whatever goodwill we currently have. It’s also a fantasy, you won’t find widespread support for that option.

So it’s my hope that you, and like-minded folks, will consider putting your energies into backing feasible projects that can make a difference instead of backing proposals that divide Portland. What do you say?

through actions the people have spoken… well said.

those are very impressive numbers – bicycling has clearly gone viral.

cyclist(#3): well stated. It’s worth mentioning that these are vehicle counts, and as such don’t consider the many bus riders that cross these bridges.

Any statistics on what percentage of bikes being ridden at night don’t have lights?

cyclist, not that I”m disagreeing with you but your argument is a little faulty. If bikes are 20% of the vehicles on the bridge, I don’t get why you think they deserve 2/3 of the lanes? Maybe I’m missing something, but I don’t follow your math. Also, bicycles take up a lot less space so if they are 20% of the vehicles, they are probably using about 5% of the space (assuming current use = 100% of capacity). So what am I missing here? Again, I think bicyclists deserve more than they’re getting, your post just didn’t make sense to me.

Eileen: Sorry, maybe I was unclear. BURR suggested that we allocate additional traffic lanes to bikes. My point was that we already allocate 2 “lanes” to bikes in the form of the sidewalks they get now… and we don’t really need more than the space we have on that particular bridge, and the mode split bears that out.

Just to reiterate, I absolutely don’t believe bikes need 2/3 of the Hawthorne bridge, the current split is appropriate and should be maintained. If we’re going to add additional capacity, it should be on another bridge.

cyclist (#3) – The Morrison Bridge project *is* a done deal. The final proposal was submitted October 10, it goes out to bid Dec 11, and barring any major problems should be finished Nov 2009.

I’d love to count the Morrison Bridge as a done deal, but it was supposed to be completed by fall 2005. I have been very concerned that the delays will mean the cancellation of this project, because of loss of momentum, competing priorities, funding running out, and cost increases since the time of funding. I recently contacted the County and was assured that they would begin construction this winter, but I remain concerned.

Yay for my fellow ladies on bikes! It’s great to see this number is growing. I’m hoping this trend continues. (I’d also like to see more diversity in the bike community in general, but that’s its own topic).

How about a combined bus and bike lane on the Hawthorne (#2 lane)? (Leaving lane #1 for private cars and the sidewalk for pedestrians.)

I don’t think I want to be in front of a bus on the metal Hawthorne Bridge grates on a rainy day. That sounds scary.

I wouldn’t ride on the metal grates on the Hawthorne under any circumstance. I think we pretty much got what we’re gonna get on that one.

the Hawthorne Bridge sidewalks have been insufficient for cyclists and pedestrians ever since the Eastside Esplanade opened, and it’s only going to get worse as cycling gets more popular.

A couple more substandard shared sidewalks on the Morrison Bridge that force you down into the Water Ave area will not make up for the inadequacies of the Hawthorne Bridge.

I’d rather see them close the Hawthorne Bridge to motor vehicles completely than be forced to accept the improvements to the Morrison Bridge as a ‘useful’ alternative to further improvements for cyclists on the Hawthorne.

Jessica (#10) – I sit on the county bike/ped commission and we got an update on the project last month. There were issues in 2005 that delayed the project until after the bridge turned 50. That made the bridge a historic structure, which necessitated re-doing all the paperwork to comply with federal historic regulations. The project is fully-funded, submitted, and is about to go out to bid.

I’m not saying to stop being concerned, but barring Sho becoming mayor, or Dick Cheney declaring himself emperor, this project should go through and be completed by the end of next year.

BURR (#15) – don’t forget, the transit bridge will relieve some of the Hawthorne traffic. I think we should focus on making sure that THAT bridge is more than adequate for future bike/ped traffic.

I really wish bp.org comments could be edited.

Before expanding bike lanes on Hawthorne bridge I would like to see the safety of the current bike traffic improved. Over the years I have witnessed numerous changes to bridge bike lanes to address pedestrian/bike sidewalk sharing. Everything from signs to speedbumps to lane marking. However when you leave the bridge (heading into town) you have bikes moving over 2 lanes to go south and cars moving right to go north all on pretty narrow lanes. I have had several scary episodes in this area over the years mainly as I try to head west and have cars moving to the right turn only lane to head north. Since this is the most traveled bike route into town a safer interchange should have been implemented years ago and I have not heard of any plans to improve being proposed recently. Past experience seems to show Portland is more likely to take action after a serious accident rather than being preventative.

I’ve been impressed at how many people have continued biking to work at my building this winter — in previous winters, the number of bikers has dropped precipitously.

It’s not winter yet.

I just mean, the days are short and wet enough that I would expect to have lost most of the fair-weather cyclists already. I don’t have any counts myself but it does seem like the bike lanes aren’t clearing out in October like they used to…