The National Highway Traffic Safety Administration (NHTSA) has released results from a “first of its kind” national survey that was designed to gauge behaviors and attitudes about bicycling and walking.

The survey was conducted with a “nationally representative sample” of nearly 10,000 American residents over 16 years of age between June 11 and August 20, 2002. There was also a mix of “urbanicity” of respondents between suburban, urban, and rural areas.

I had never heard of this survey before reading about it on Streetsblog this morning and it’s been fascinating to read through the findings.

Here are some of the findings that caught my eye… 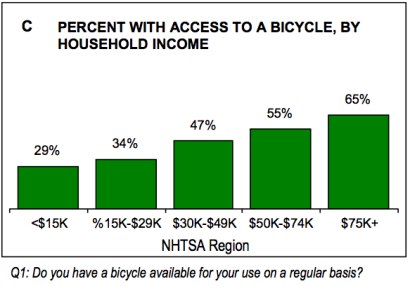 The survey’s finding that, “Access to a bicycle rises along with household income” is a bit sad. Bikes don’t have to be expensive. The current economic crisis might also change this chart — as more Americans use bikes for non-recreation purposes and fix-up clunkers to save money.

Frequency of biking in summer months 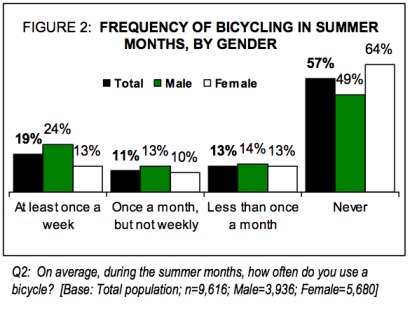 Frequency of Bicycling in Summer Months by Gender

Over half of Americans (57%) reported they never ride during the summer months (!).

This nearly made me cry.

I was shocked that the number of people who never ride in summer was so high. In a later chart, NHTSA asked why they answered never and 28% (the top response) was “no access to bicycle”. Let’s get free, neighborhood bike programs up and running folks!

Why are people bicycling? 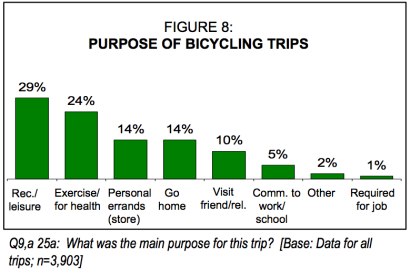 I’m not surprised to see recreation and exercise at the top, but I think it’s fantastic to realize that 47% of the bike trips were taken for other, more utilitarian purposes.

Not surprisingly, the top reported threat (of the 11% who felt threatened) to safety when bicycling was “motorists”. The survey found that,

Availability and Use of Bicycle Paths/Bicycle Lanes
50% of bicyclists reported bike paths are available where they ride and just 32% said bike lanes are available. But… 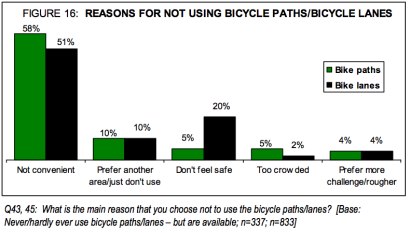 Reasons for not using bicycle paths and lanes

…the survey also found that less than half of bicyclists actually use those bike lanes/paths when available. Why? Because by a large margin, respondents said that the paths/lanes were “Not convenient”.

Other topics covered in the report include helmet use (or not), riding with visible clothing, and more. The survey also asked similar questions about walking.

It’s rare that bike advocates and believers get access to a survey of this size from a federal agency. I hope NHTSA plans to re-do the survey every few years so we can see how/if attitudes change as cities become more bike-friendly.

And I also hope that next time they do a survey like this, it doesn’t take six years for the full results to come out.

5% don’t use bike paths because of fear of safety. Some times I’m concerned about the characters that seem to get attracted to certain parts of the Springwater after dark.

2002? I see a page in the report that is “intentionally left blank.” Perhaps that was going to be the page where they apologize for taking so long to publish.

if i have to bike 10% farther to use bike lanes i ‘might’ use them. 20% and there’s no chance. the roads aren’t that scary, even MLK

I took 6 years to crunch the numbers?!

How the next survey gets a quicker turnaround.

Thanks for sharing this! great reading and
some understanding of why cycling is just
a rec sport to some.

The income thing surprises me, but only a little. I try to turn this into an opportunity. I pick up a Goodwill or garage sale bike, and overhaul it and sell/give it to somebody who needs a bike, usually one of my teenage son’s friends. This scenario has played out three or four times now. A friend of my son’s gets a brand new bike. It is usually either too expensive or too cheap to be a good fit. Within months, the new bike gets ripped, breaks, or backed over. Now the kid is without wheels, and a new bike is not in his future.

I tell my son it is cool to lend him one of the bikes that I have overhauled. Usually after a month or two the bike comes back, I unusually just give the kid the bike at that point, on the condition that he get a decent lock and bring it back when something goes wrong with it. I tell them that I won’t fix it, but I will show them how to fix it.

I am not relating this story to show how cool I am. I just wanted show how direct action can impact the people around you in a positive way and get more people on bikes. Besides, I get to know the people my son hangs with in way that lets me not get distracted by teenage awkwardness, nose rings, purple hair, or boxers hanging out. (Ok, I will never really get why having most of your ass hang out of your jeans is cool, but I mostly keep my mouth shut.) All the bikes I overhaul are bikes I got cheap, and were decent enough quality to invest a little effort into. It is amazing how many bikes are still floating around from the last bicycle boom. All of them go out the door with racks or baskets, fenders and lights. At first most teenagers think they are geek mobiles, but soon they see the light.

The income question points out why all cities need programs similar to Community Cycling Center’s “Create A Commuter” for low-income folks. The less our modern life absolutely requires a car, the better off we’ll all be, but this is especially true for those with limited incomes.

Like Meghan (#8) said, the CCC helps low income kids and adults in PDX get bikes and skills. They have a great volunteer program. But if you can’t do that, you can still shop for your bike stuff there. It’s nice knowing that some of what you paid for your new pedals or whatever will go towards getting a bike for someone who doesn’t have one.

More people ride against traffic when they’re in the street than on a sidewalk. Amazing. And nearly one in four of every cyclist? What are they smoking?

Sort of related – for those reading this who are riding or watching the Cross Crusade races. Bob’s Red Mill came on board as a sponsor this year and is giving out free oatmeal at the races. They have a donation jar at the stand – the money goes to the CCC. When I talked to Dennis G. (one of Bob’s VP’s) a couple weeks ago he said they had already raised enough money to purchase 10 bikes. Ride cross, eat oats, and give generously for the cause!