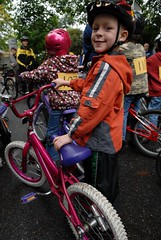 This morning, despite a steady stream of rain, hundreds of Abernethy Elementary School kids took part in a new spin on the the traditional walk-a-thon fundraiser; they did a bike-a-thon.

Dubbed the Tour de Ladd, organizers of the event closed a loop of streets adjacent to the Southeast Portland school (hence the name) so the kids could pedal around the neighborhood and enjoy the blooming roses and carfree streets.

Volunteer Mia Birk has two kids at the school and she helped organize the event. Birk said over 80% of the kids (350 kids total) participated and she and other volunteers outfitted all of them with helmets (provided by Legacy Hospital). 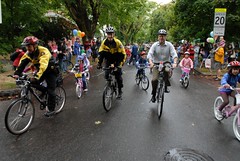 City Commissioner Nick Fish and
Officers Pickett and Park from
the SE Bike Patrol led the kids out on
their first lap.

City Commissioner Nick Fish stopped by the event on his way to City Hall and rode with the kids for a few laps. It was great to see the newest member of City Council showing support and participating in a bike event.

Hear interviews with Mia Birk, Commissioner Fish, and more in the video report below. You can also view more images in the Tour de Ladd photo gallery:

That is absolutely spectacular. Congratulations to all the organizers and thank you Mia for once again showing us all how cool bikes + kids can be!

When can we do Tour de Buckman?!

Scofflaw kids! Enjoying the streets! The PPB was there, handing out $242 fines for all these scofflaw “kydclists” who ran stops signs! It was a fundraiser for the police dept. too!

dude. don’t go raining on the parade with your talk about cops and tickets. not on this post. this is a family-friendly post full of smiles and goodness… let’s save the PPB/stop sign chat for another day.

Sorry about that Jonathan! Didn’t meant to offend, feel free to delete the aboved referenced post.

What a great concept. These kids are the future of biking in this city and the look awesome. Now let’s work on getting these kids to bike/walk to school every day!

Cool! I wondered why all the streets around there were blocked off this morning.

Fabulous! Congratulations to Mia for an outstanding idea and event! What a great way to get kids excited about biking, to make sure helmets are properly fitted, and raise money. Way to go!!

Great job, Abernethy kids, parents and volunteers!! It is so cool that so many kids came out in the rain and were smiling and having fun.