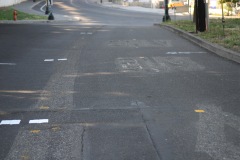 Old lane markings have been
ground away and the new, bi-directional bike
lane is being mapped out.
(Photo © J. Maus)

The Rose Quarter Transit Center, long a thorn in the side of bike advocates who want more efficient north-south access, is slated for a host of bike access improvements.

Those improvements — which include bus line re-routes and several new bits of bike-specific markings and lanes — where initially set for completion on August 31st. But now, the latest word from TriMet planner and bike specialist Colin Maher is that the new bike lanes, bike box, and signage, is “expected early next month.”

He told me last night that the new bus stops and re-routes to accommodate the new bike treatments “have been in place for three weeks now and are operating smoothly.”

I also asked Maher about the petition by TriMet operators that surfaced in the local media and called for a halt to the plans. At the end of last month, bus and train operators said having bikes come through the Rose Quarter would be an accident waiting to happen and would “cost lives” if the plans went forward.

Maher said he has been in touch with the operator who organized the petition and that he (the operator) has “attended a field review of the proposed changes and is helping develop new materials that will demonstrate how buses will operate with the addition of bikes lanes/bike box.”

Maher added that he is working closely with operators to help make sure the new Rose Quarter bike access works safely for everyone. “Their feedback,” he said, “will be an important aspect of monitoring and evaluating the changes following implementation.”

I’ll have photos and a full report once the project is complete.

Well, I guess that divisive, us v them mentality petition went nowhere, which is exactly where it seemed to be headed at the time.

Now that Tri-Met drivers will be “forced” to share the road with bicyclists there as in the rest of the city, I wonder if this is the end of their hysterics?

Since their petition admitted that they were incompetent at sharing the road with bicyclists, I guess it’s only a matter of time before that petition shows up as Exhibit A in a negligence lawsuit against Tri-Met the next time they run someone down.

Get rid of bikes: FAIL.

Expose your employer to liability: SUCCEED.

Well, I like the outcome here, but I thought the operators were reasonable. A kid died on TV Hwy and there is no way to assign blame or innocence enough to take the pain out of that. When we say the operator was not at fault are we saying to all operators that if they are unfortunate enough to be behind the wheel when that happens then it’s no problem? We and they all know that it IS a problem. It is a systemic problem. Excluding bikes from Rose Quarter has been part of a systemic solution to the problem.

Did y’all attend the Water Bureau’s show and tell about the ability of truck drivers to see bikes? It was an eye-opener. There are blind spots you can be in that are not obvious. One of these places–beside the truck’s right front wheel in a bike lane–is the place I go to assert my right of way. Guess what: I’m invisible!

Buses share some truck difficulties: they can’t see straight back, and there is a big blind area on both sides outboard of the areas shown by their mirrors. A full bus has only its mirrors to go on. Even in an empty bus it’s a problem. Unlike the Water Bureau folks, who tend to stay pretty fit, some bus drivers can’t turn to look. In a dump truck the driver is likely to have a partner in the right seat who can look for bikes. Not the bus driver.

I’m looking forward to the unveiling of the changes. I am expecting a safe and effective solution. It will be especially exciting if the new ideas for Rose Quarter can be applied elsewhere to the Bus Stop Problem.

I’m a biker in this area but have a suggestion to benefit bikers and peds: Make the pedestrian walk/don’t walk signs be foremost synchronized with the coming and going of MAX Trains. People aren’t going to stop darting into traffic to catch their trains, so why not make the necessary accomodations of safely running commuter trains in the middle of busy streets?

As further evidence, look what happens during afternoon rush hour when 100 people deboard and choose to cross a street, despite a don’t walk signal, just because there is force in numbers.

the bike/ped lower deck of the Steel Bridge has been frequently closed lately anyone know why or duration ? 1 post - 1 participant Read full topic Read Post Â»

On May 11, this blog reported that the long standing bike chop shop and camp that occupied a full block of SE alder and 30th had been cleared. I was walking in the neighborhood… Read Post Â»

Tragedy. What is going on here? Are people walking on the tracks? oregonlive â€“ 16 May 22 MAX trains strike two pedestrians within 48 hours in Portland Already, half of the people killed in… Read Post Â»

Another pedestrian critical injury. Maybe I should just drive? KOIN.com â€“ 16 May 22 Person critically hurt by MAX train in NE Portland One person suffered critical injuries after being struck by a MAX… Read Post Â»