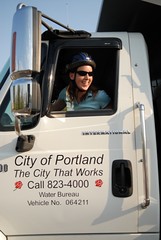 Cyclists got a new view of the
road at a bike/truck safety
event yesterday.
-Audio slideshow below-
(Photos © J. Maus)

The Portland Water Bureau gave cyclists plenty to think about at their bike/truck safety event yesterday.
The event gave the community a chance to experience what it’s like to sit in the cab of a 12-foot high dump truck that weighs up to 56,000 lbs. fully loaded. After snacking on free fruit and filling their bottles with water straight from a nearby fire hydrant, cyclists climbed up into the cab for a game of, “How many bikes can you see?”.

Water Bureau staff, with help from the Bicycle Transportation Alliance (BTA), had placed ten bicycles around the truck to try and mimic roadway conditions. David Shaff, director of the Water Bureau, watched as one cyclist after another made their guess.

“I see four bikes,” said one person. “There are five,” said another. Cyclist Lillian Karabaic hiked up into the cab, checked the mirrors, and exclaimed,

“This is terrifying, I would not want to be in this position at all.”

The point was clear. From inside the cab of a truck, there are many blind spots. 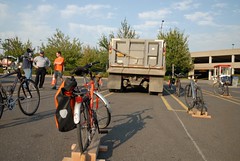 In addition to taking a seat in the cab, cyclists got a first-look at a new bike/truck safety video produced by the Water Bureau. I’m usually skeptical of educational videos as they are often cheesy and pedantic. But this one worked. Much of the footage was taken from inside the truck’s cab on crowded bikeways I’m very familiar with, but they looked completely different from a trucker’s perspective. It was eye-opening and nerve-racking just to watch the truck’s rear and side mirrors as bikes darted in and out of view — I couldn’t imagine the stress of actually operating that vehicle. 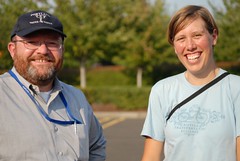 The video emphasized watching out for a truck’s right-hook “danger zone” and made the point that keeping safe is a joint responsibility (one major point was to wear highly visible/reflective clothing). (No online version of the video exists, but I’m working with the Water Bureau to get a copy and will post it ASAP.) Water Bureau spokesman Tim Hall says they’re still tweaking the video and hop to make two, 30-second PSAs to air on local TV.

North Portland resident Travis Wittwer brought his three young boys to the event. Travis said since the boys are now riding on their own, he’s taking them to as many bike events as possible. His eight year-old Kael was eager to share what he learned; “When I went into the truck, I only saw three bikes by looking in the mirror…and when you’re stopped you have to make sure the truck can see you.” (Hear more from Kael in the audio slideshow above.)

Water Bureau maintenance engineer Peter Nierengarten was one of the people who spearheaded the bike/truck safety campaign and he said they would like to do another event like this in Southeast Portland as well a separate effort to create awareness about safety in construction zones.

It\’s great to see a cooperative effort like this. Did anyone from the Water Bureau get on a bike and see how massive the truck looked?

Great event… I stopped by to check it out. Thanks to all who put it on. Not the fault of the drivers, but why is Detroit designing trucks with so many blind spots? Technology might allow sensors or cameras to be utilized as an aid to conventional mirrors.

Mark P, from the other thread about this event, the Water Bureau has a large bike contingent and include bikes as part of their training… so you could say that they already know what it looks like when the shoe is on the other foot.

So…. how many bikes were there stationed around the truck? I think I see 6 from the picture above, but are there any in front of the truck?

Jonathan, think you will be able to upload that video to YouTube for us at some point?

\”So…. how many bikes were there stationed around the truck?\”

\”Jonathan, think you will be able to upload that video to YouTube for us at some point?\”

Yes. working on that.

I stopped by and it seemed like there were quite a few cyclists and City personnel interacting in a friendly and productive manner. Great, great program! And it was also really smart of the BTA and the City to put it at the Rose Quarter so they could grab people coming home on their commute.

This is great…..I know the Water Dept. is doing what they can to make roads safer.

I think it is equally, if not more important to educate truck drivers, and not just those with the Water Dept. as to how to drive properly around cyclists.

There should be required bicycle awareness training that is done before issuing, or even reupping, a CDL license, at least in the Oregon.

About how many people attended the event?

\”About how many people attended the event?\”

a solid amount. it wasn\’t packed and only small percentage of bikers that passed by stopped.

it was amazing how few people pulled over for the event… even though it was practically in the bike lane and there were freebies and lots of good info.

that being said, i think the Water Bureau folks were pleased at the turnout (they ran out of fruit and water bottles).

that\’s a good idea. but it would be better and more equal if the truck driver got to see the road from a bikers perspective too. it would give them a feeling of what it\’s like to ride next to a 5 ton juggernaut who may or may not care about your safety.

bobcycle #2: Coming from the perspective of a former delivery driver who drove a vehicle as large as the city\’s water truck I think the problem is not totally one of blind spots.

The biggest stress driving safely through areas of town with heavy bike traffic was not that I couldn\’t see bikes, but that the presence of bikes sometimes puts the driver of a heavy truck into a sensory overload of sorts that only adds to the already high level of anxeity a driver already feels driving on a busy urban roadway.

As counterintuitive as it may seem I believe that tools such as cameras and sensors, never mind the expense, would only add to the sensory overload and make it even more difficult for a driver to safely navigate Portland\’s busy bikeways.

There\’s not an easy fix to this bike/truck issue, but the Water Bureau (and Tri-met it seems) are leading the way through educating and bringing awareness to both perspectives. The fact that I rode bike and drove truck gave me the skills to safely navigate Portland for four years (in the truck and on the bike) without incident, I beleive the Water Bureau is on the right track to try to give more people these skills and knowledge that I was lucky enough to receive.

\”It\’s great to see a cooperative effort like this. Did anyone from the Water Bureau get on a bike and see how massive the truck looked?\”

YES, everyday I and about 60 other Water Bureau Employees (including a handful of truck drivers) saddle up and ride the street of Portland to and from work. Working on this event has really taught me alot about how to safely manuver around all large vehicles.

I\’m glad they had this event. But I rode right by (with a wave and a \’thank you\’). It has always been pretty obvious to me that the visibility on trucks is severly limited, and I adapt accordingly.

bobcycle (#2) – minor nitpick, it\’s not Detroit – International Trucks is headquartered in Illinois. Mack is in Allentown, PA. Peterbuilt is in Denton, TX. Detroit is still the king of cars and light trucks, but has little to do with commercial truck design in the modern era.

None of which invalidates your point – why are the big truck manufactures not installing adequate safety equipment?

Chad (#11) – Thanks, that is spot on. I still think that redesigned mirrors would help in certain situations, but cognitive overload is a big problem.

General comment: I hope the city does more of these events – I don\’t think a lot of drivers understand how intimidating their trucks really are, and I\’m fairly sure most cyclists don\’t understand how difficult it is to drive one of those trucks, and to be aware in a kinesthetic sense where all parts of their vehicle are in relation to everything. It\’s worse the larger the vehicle is. While I firmly believe that operators of large trucks need more training than what they currently typically get, I think that many of us do them a disservice by being so quick to judge them for things that are out of their control.

On one matter, though, I accept no excuse: there is no excuse EVER for a driver of a commercial vehicle (requiring a CDL) to fail to check that all his signals and lights are operating, or to fail to use turn signals in any instance. The potential consequences of a failure to signal are far too deadly, and may have been a factor in some recent high-profile deaths.

Thank you to the Portland Water Bureau… this was a great idea, and I\’m glad they\’ve done it. Hopefully they\’ll continue so new riders and drivers continue to get the message.

It promotes the kind of shared understanding that will make our roads safer all around. (As opposed to the \”us\” vs \”them\” that seems to be a problem sometimes.)

I saw this and wanted to stop, but I was already late to my class. I think these kind of events are really important and I hope they continue to do them! It is important to step into others\’ shoes to understand their point of view (in this case, literally).

This is awesome, I wish I would have known about it before the event, but my internet was down so I\’ve been more out of touch than usual. I hope they continue to put these events on.

I forgot to add that I often hear cyclist say that CDL drivers need to spend time in the saddle to see what it\’s like from a cyclist perspective, but I think it\’s even more important for cyclist to see the road from up there. After all, it\’s you ass on the line, not the driver\’s.

Just a reminder, If you can\’t see the driver, the driver can\’t see you. I see people put themselves in some very stupid positions.