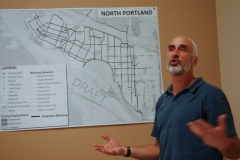 Geller presented the results of that work to a meeting of the Portland Bicycle Advisory Committee last Tuesday.

The thrust of the effort, according to Geller, was to identify new streets that could be potentially developed as bicycle boulevards (low-traffic streets where bicycle travel is given priority). “Our network is very bike lane heavy,” Geller told the committee, “one of the important elements of the Bicycle Master Plan is for us to identify a network that really focuses more on bike boulevards.” 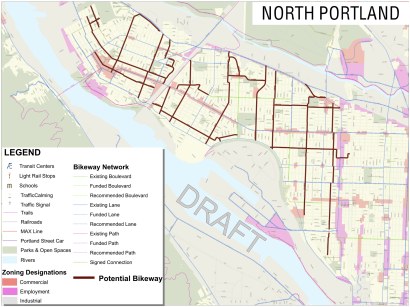 Geller and Igarta identified gaps that exist in the bike network throughout North Portland and they also made a list of recommended improvements needed to “make these streets work well for bikes.” Geller said that on many of the streets, “there’s not much needed,” to make them more bike-friendly and he added that the “big ticket items” are a few tricky intersection crossings. 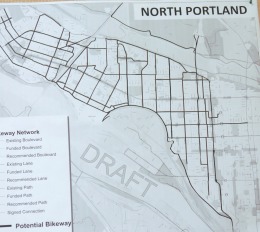 With this new work, PDOT has now filled in many of the gaps in North Portland with what they hope will become officially designated, “city bikeways”. A city bikeway is the highest ranking of three official street classifications that relate to bike traffic (there are also “local service bikeways” and “off-street paths”).

The city bikeway classification is important from a policy standpoint because it provides direction to the PDOT as to what type of improvements, facilities, etc… can be developed on those streets in the future (much like a designation of “freight access street” does for truckers).

The largest remaining gap in the North Portland bikeway network is N. Lombard Ave (a state highway). Geller said they have plans to add some bike lanes toward the western end of Lombard but that much of it will remain as is (without any room or facilities for bicycles). “We’ll be stuck with a big gap (on Lombard) until something big happens,” he said.

Geller and Igarta will now determine cost estimates for recommended improvements and then take maps and more information out into the neighborhoods to get more feedback.

We the eye of Mordor swing east at some point?

Networks and Bike Boulevards aside, I have seen a ton of (re) paving on quiet residential Piedmont streets, while bike commuters are transiting NE Holman on what appears to be a 75+ year-old cracked, patched and buckled concrete roadway. What gives? Our property values have not climbed high enough?

Thank you for sharing this. It is good to see this effort being made. I have noticed a big increase in bicyclists on the peninsula in the last few years.

I would be interested in knowing more about the connectivity of the \”bikeway network.\” How do these designations interface with off street trails and paths such as Peninsula Crossing and the Willamette Greenway?

Lombard is mentioned as a big gap. I still strongly contend that there is a gap in safety on the commute down Greeley. Until we get access along the river, this is still a major bike commuting route. What needs to be done to improve the merging sections at the on-ramp from going and the on-ramp to I-5 from Greeley? I would love to see green thermoplastic strips laid down here like we have had laid down in other dangerous intersections.

Roger: Is this plan being taken to the Neighborhood Associations? Are there other forums for public comment?

They need to connect the lower end of the Waud Bluff trail to the network on Swan Island. According to the pdf, there will be a gap of a block and a half when everything gets built…

there will be a gap of a block and a half when everything gets built,

par for the course, where the going gets tough, the city gives up…

Very happy to hear North Portland has got some good bikey things hopefully coming its way.

Also glad to hear that Lombard is at least on the minds of those at PDOT as the increase in bicycling in North Portland has found many newbies riding right down *gasp* Lombard, which from a novice\’s car-centric point of view seems (incorrectly) like the only way to get from one side of NoPo to the other.

Before something \”big\” happens with Lombard, I think it would be a wise stop-gap measure to increase awareness of the Lombard alternatives like Bryant or Buffalo on Lombard to let people know there is a better (and much safer) way to get across North Portland than the death defying lanes or sidewalks of N Lombard.

I\’m a little confused by this…

In looking at the PDF it seems like some of the major NS corridors aren\’t represented.

Is Borthwick or Kerby in the mix for Bike Boulevard?

I\’m guessing that this only covers West of I-5?

The city has got to deal with arterial street access and safety for cyclists as well as with alternative routes, otherwise the whole plan is simply half-assed. Crossings of I-5 need to be improved as well…

How much input did they get from residents of North Portland? I have a few questions about the choice of specific streets (for isntance, why Burr instead of Buchanan, which has a light at Lombard). But-yay for Charleston! That\’s my street. 🙂

To answer E (comment #9) – very little so far, but that is the next phase. My understanding is that these are the bikeways that Roger and Denver have identified themselves (with a little bit of input from others) and that the next step is to take this to the neighborhoods and ask them what they think. Stay tuned.

Over the course of last summer, Roger held a serious of Bike Master Plan rides that were very well attended.

There was definitely a North Portland one (which I attended) and I think one of the reasons of the ride was to garner feedback.

Good to know. I was just buying a house and moving into North Portland last summer so I missed the rides. I hope Shamus is right about future opportunities for input. I\’m excited to see things moving in this direction, regardless. A stronger infrastructure will definitely support the exponential growth of riders. I\’m amazed at how many more riders I see along N. Willamette and Greeley than I did this time last year.