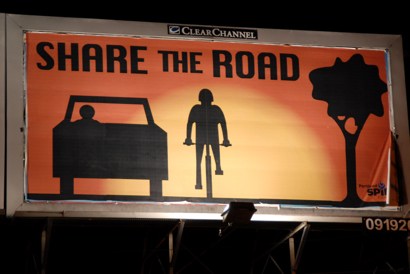 Several of these billboards (this one is on SE Grand just south of Belmont) have sprouted up around Portland.
(Photo © J. Maus)

Over the weekend, I noticed several new “Share the Road” billboards throughout the city. So far, I’ve seen them on NE Grand just south of Belmont, on W. Burnside at about 20th, and on N. Interstate at Killingsworth.

As you can see from the photo above, even though the message is simple (and a bit trite in my opinion), the design works because the colors command attention and graphic succeeds in cutting through the urban landscape. I also appreciate how the bicycle is prominently featured and (whether the designers realized it or not) the design highlights a dangerous road condition — sun glare.

I was surprised to see these billboards, because I haven’t heard a peep about them from my usual list of sources.

Upon closer inspection of the sign, I noticed the words “Portland Spirit” in the lower right-hand corner. My immediate thought was of the Portland Spirit cruise boats that work in the Willamette River. That would have been strange however, because the Portland Spirit is owned by Wayne Kingsley, an arch nemesis of the City of Portland who is fighting a bike/ped trail through a parcel he owns just south of OMSI on the Eastbank Esplanade (see the “SK Northwest” case).

Finally, I determined that these billboards are indeed the work of Clear Channel. It seems they are part of their “Local Spirit” program. Here’s how Clear Channel describes that program:

“…Because of our deep involvement and connection to local communities, we’re able to make philanthropic decisions that have the greatest impact on local neighborhoods. Whether it’s in support of children’s hospitals and shelters, food banks, educational programs, healthcare, cultural enhancement or a myriad of other issues important to local communities, Clear Channel’s Local Spirit shines through.”

No word yet on how long the billboards will be up. I’m awaiting a few call backs.

Have you seen these? What do you think?

I saw this PSA for bike and driver safety on KIRO TV this past weekend in Seattle. It ran many times throughout the day.

You have to endure a very short ad to see the PSA but I think it is pretty effective and probably makes a stronger impression on drivers than billboards.

I think they\’re kind of ugly… the bicyclist looks like he\’s in a war zone, with the glowing orange like he just rode over an IED, and the soldier-like helmet. I mean, sometimes we _are_ in a war zone, but is that the message that should be put out there?

The glass half full,

You can see the biker and driver riding off into the sunset harmoniously with miles on their faces.

I, for one, am glad to see that the tree is finally getting the room that it deserves.

There\’s one on SE 82nd, around Duke St. area. We definitely need one there, because SE 82nd drivers think of it as made for cars only. The reality of 82nd is that there are many bicyclists out there (many who wear no helmets), and either degraded or (in some spots) no sidewalks.

Half-full indeed. Almost enough to make me change my impression of Clear Channel. Seems like that space between the cyclist and the tree could use a pedestrian, though. One with a dog or children, or both.

Yeah, now that you mention it, the rider does look like an Army soldier. And the car driver doesn\’t have a cell phone up to his/her ear… 😉

I like it though. It\’s simple and to the point. Also good observation about the sun, Jonathan – appropriate this time of year. But we\’ll probably hear from pedestrians who feel left out. And motorcyclists. And segway riders. Etcetera.

The design IS a little clunky, but it is a good billboard design (so many are horribly over-designed). The board reads instantly and the car and cyclist are readily identifiable.

I agree with a.O– a pedestrian might have been a nice addition. But then again, it would have also diluted the message which addresses the conflicts between cars and bikes.

Oops– I clicked \”submit\” before I was finished.

I think message is a little too commanding. I can almost see Big Brother glaring down, pointing his finger and ordering us all to \”share the road\”.

Perhaps \”We are all traffic\” might have been a little better?

Whats that big vast space between the bike and the tree??? Oh, I see, this is a fantasy… I get it!

The simpler the better, I think. Too much stuff on a billboard dilutes the message, and motorists wouldn\’t have time to get it. We need some of these on Barbur and B-H Hwy.

I sincerely appreciate this positive image — however — there is ONE message that really needs to get out there, and that is this:

What part of \’cars not allowed in bike lanes\’ do you not understand? or in other words:

A simple, \”It is never okay to drive or stop in a bike lane.\” would prevent a lot of grief, death, anger, fear, irritation, injury…

Of course, we all know there are exceptions, but they do not need to be pointed out because drivers will and do take advantage of them.

Driver and PDOT attitudes toward bike lanes are too lackadaisacal. For instance, when turning right, cars should turn right IN the intersection, not cut across the bike lane even a foot.

If the rider looks like an army solider, then that\’s great because everyone thinks soliders are heros, right?

Who\’s gonna be the first to tag this one? I suggest we black out the car so it is just the bike… that will totally blow their minds.

I\’m not sharing the roads with trees. This has gone too far.

Don\’t get me wrong, some of my best friends are trees….

Did you know trees can kill people? Yep, they\’ll fall right on you if you stand under \’em long enough.

But you don\’t have to wait nearly as long for people driving cars to kill you. Check it out:

I wish it had a picture of a semi, a delivery van, a motorcycle, a pedestrian, a bicycle, and an automobile in that order to emphasize the notion that automobiles are the lowest on the totem pole (grin)

If nothing else, we should be glad that billboard is up and provided material for hilarious comments!

The car is definitely too close to the cyclist. With all that room you think they could have left a more reasonable amount of space between. Not a good example. And, yes, maybe add a pedestrian or two, some kids, a dog..

It looks to me like the bike is taking up way too much room. He should move over closer to the tree and quit hogging so much road.

umm… it\’s not the best illustration. While simple is good, and the message is understood, it looks like the designer just learned to use adobe illustrator. They could have spent 5 more minutes to make it look a little better.

cars and pogo users definitely need to share the road.

I like the big space between the tree and cyclist. To me it says share the ENTIRE road. I think it\’s a timely message since the tree is going to clog up that space with all it\’s leaves soon.

\”No word yet on how long the billboards will be up.\”

I bet that the \’share the road\’ signs will be taken down as soon as ClearChannel finds an advertiser for that (unrented) billboard.

Salty comment to be sure, but at least ClearChannel chose to do something positive with it\’s unrented space, and not just tear down the old billboard and leave it ugly.

I\’m with #10, @21, and #24. The arrangement of the three main actors on this billboard is weird. The way I first interpreted it is that the car is passing the cyclist who is riding down the center line of a country road. Although I\’ve never encountered such behavior, as a thought-provoking (subversive?), or just plain confusing billboard it wins some points. Made me think.

On second thought, perhaps the explanation of this counterintuitive arrangement is that the figure in the middle whose feet aren\’t touching the ground isn\’t a cyclist at all, but a workman with a poorly calibrated jackhammer. Habituated as we our to feel-good phrases in the context of traffic we immediately jump to the conclusion that this is about bikes and cars (a point for the Oregonian!). You will perhaps note that there are no pedals and it would make a good deal more sense for a jackhammer-operator to be in the middle of the road than a bicyclist with no pedals–or at least no cranks.

You all overanalyze everything too much. I wish I had that much time on my hands! 🙂

I wish the driver that drove me off a road into a ditch yesterday had seen this.

But then again, would it have made a difference? I doubt that the kind of driver that refuses to give a biker an inch of roadway would be \”moved\” by any sort of \”Share the Road\” campaign. If anything, it might piss them off to the point where they aim for the next biker they see.

\”Salty comment to be sure, but at least ClearChannel chose to do something positive with it\’s unrented space, and not just tear down the old billboard and leave it ugly.\” KWW

Unrented space needing to be kept from being ugly? Well I\’m sure the towns graffiti cats would have loved to have it as a legal board for their work. What about it ClearChannel?