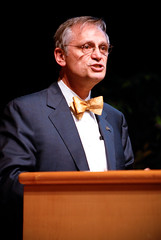 What sort of mystery legislation
does Mr. Blumenauer have up
his sleeve?.
(Photo © J. Maus)

On Monday morning, U.S. Congressman Earl Blumenauer will be in Portland to announce legislation that he says will provide immediate relief from high gas prices.

A statement issued today from Blumenauer’s office says that, “Although there is no silver bullet for solving the energy crisis, Portland and the metro region have led the way in providing innovative and cost effective methods for helping people deal with the rising costs of gas.”

Specifics of the bill won’t be revealed until Monday’s event, but the statement says it will take ideas from Portland even further by having the federal government, “invest in communities instead of gas tanks,” and that it will, “provide consumers with housing and transportation options.”

Blumenauer will be joined at the event by: Rick Williams, head of the Lloyd District Transportation Management Assocation, Metro Council President David Bragdon, and representatives from TriMet and the Oregon State Public Interest Research Group (OSPIRG).

With bicycling making headlines around the country and lines being drawn for the transportation funding battle to come next year, Blumenauer has been asserting his bike-friendly credentials in Congress and in the media.

This week he appeared in Congressional Quarterly and he was interviewed during his daily ride to work by a reporter with National Public Radio.

interesting…Earl\’s saavy enough not to propose a bankrupt idea like a federal gas tax summer holiday, a la McCain & Hillary.

anyone want to guess what he\’s got up his sleeve?

This is odd. Especially after the local Oil lobby went after Sam\’s Safe, Sound, and Green Streets effort. I wonder whats going on here. . .

I love Earl but do you really think he has a shot of defeating the oil companies that own Congress?

i\’m curious too.. his office is working on a bill summary now and I hope to post it soon as i can.

Trust me, you\’re gonna like it. It will probably be a trial run for the coming Democratic Congress (i.e., won\’t get through the Oil Lobby\’s GOP lap dogs this time), but we\’ll see.

Could it be that Earl is going to provide the funds for moving and installing the Sauvie island bridge over Flanders? 😉

Maybe for transfering funds that would go for the massive CRC bridge to building a subway thru downtown and a try high capacity transit system.

update from Blumenauer\’s office…. no more details of the proposal will be made until after Monday\’s press conference.

Where IS all that gas $ going ?
Anyway, see you at the North Freak ride.

Oh man, this is like an episode of \’24\’ where they leave you hanging right at the end.

Please get another picture of Earl to use, that one\’s just scary!

\”Specifics of the bill won’t be revealed until Monday’s event, but the statement says it will take ideas from Portland even further by having the federal government, “invest in communities instead of gas tanks,” and that it will, “provide consumers with housing and transportation options.”\”

(Quoted from J\’s article, above)
Weird… how is the federal gov\’t going to do this? I am especially curious about providing consumers with housing and transportation options… is that like providing dorms and rental bikes closer to peoples\’ work sites? How is that going to be accomplished?

I think a couple changes to the FHA/VA/etc laws to allow them to loan money for people buying units in multi-unit dwellings would do wonders.

And I doubt the oil industry would fight that…

(Although I agree with Lenny: Spend money on transit, not highways.)

I think Becky is right. It will be some kind of tax rebate for buying a new bicycle.

Last winter, on a Sunday morning in downtown Portland, Congressman Blumenauer convened a group of forward thinking transportation professionals to brainstorm ideas for a new sustainable infrastructure bill he was working on. Maybe this is the unveiling.

jonathan, you replaced Earl\’s picture per Ra — i mean BURR\’s (#13) — request, but it\’s worse than the last. He now looks like some sort of demented, & slightly perturbed, equestrian.

sheesh… have you pleople no mercy?!!? 🙂 just imagine what you would like Earl to look like in the photo then! lets go ride bikes.