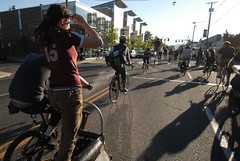 Over 350 people on bikes, in all manner of costumes, stretching seven city blocks on an otherwise normal Thursday evening… sounds like Pedalpalooza is here!

All types of folks showed up to partake in the bike fun tonight. I saw trikes, tandems, tall-bikes, a tandem recumbent, a bunch of unicycles, old people, little kids, lots of dresses and costumes — and a lot of smiling faces.

Jon “Dutch” Paglia showed up in a full wrap lycra suit, smoking a cigarette, with a gold-painted tall-bike that he did several ballet tricks on (in the video below): 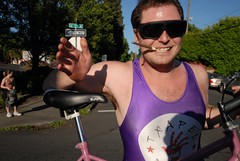 There were tons of kids out there this year. Check out this little guy: 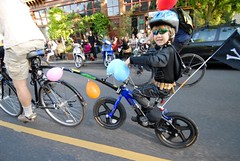 And this dude pedaled the whole ride on a tiny Huffy… and then raced the big boys at the park: 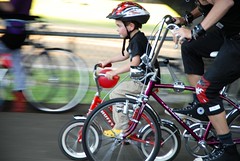 Carl Larson showed up with a cool trike filled with Pedalpalooza Calendars: 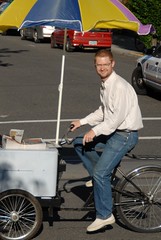 For more photos of all the wild and crazy folks that showed (including City Council candidate Charles Lewis) up to, check out my photo gallery (and while you’re there, be sure to notice the new ad from BikeTiresDirect.com — they’re the new sponsor of my Photo section).

And if you want some moving pictures, with sound, check out the little movie I put together below. Highlights include some words from Mr. T-mo Forsberg, a bit of tall-bike ballet from Jon “Dutch” Paglia and a look at the crowd at the end of the ride at Colonel Summers Park:

Beautiful day for a ride with 350 of my favorite people.

Gotta say it: Nice pan on the boy wonder, sir.

Wish we could have been there! We held our own mini-Pedalpalooza parade on our way home from the final t-ball game of the season on the streets of the University Park Neighborhood in North Portland.

so much fun! The side-hack was a hoot to ride. I always love getting compliments on it, even though in my head, there\’s like a million things wrong with it. 😛

I inadvertently got \’caught\’ waiting for the parade to pass. I felt a lot of Portland pride to see so many different people riding together in unity. I saw Roger Geller (PDOT) right in the mix.

Couldn\’t have made the whole parade without a push from some amazing fellow cyclists…..I am forever grateful!!!
Gee whiz Portland…thanks for the memories

Yeah, the pedalpalooza link links to their banner.jpg

The Pedalpalooza parade was awesome – I just barely made it after getting off of work, looks like I\’m in some of the pics too. Good times! The 5 senses ride afterwards was even better… and free voodoo donuts are always a bonus!

Great footage of the event. Props to the dude w/ the badass trailer sound system.