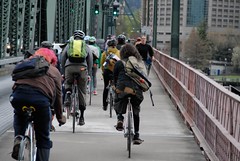 Bicycling Magazine has released their list of the “Best Cities for Cycling” and Portland is once again on top.

Here’s what Bicycling’s Brian Fiske writes about Portland in their June issue:

“What perennially puts Portland atop our list is that you don’t need to know anything about bike lanes or city planning to see that it is a haven for cyclists. Just hang out in a coffee shop and look out the window: Bikes and riders of all stripes are everywhere. City support is important, too. In response to six fatal car-bike crashes last year, Portland rushed approval of 14 bike boxes–painted areas in front of cars at red lights that give bikes priority–at high-risk intersections, among other safety measures.”

Joining Portland in the “Still the greatest” category are San Francisco, Boulder, Chicago, and Seattle. Bicycling’s editors also note that the Seattle city council has, “unabashedly stated that its goal is to unseat Portland as the best U.S. city for cycling.”

Listed as the “Most Improved Cities” are: Washington D.C. — they won the bike-sharing race; Louisville, KY — home of bike-friendly Humana Corp; and New York City — whose new DOT director rides a bike and where a streets renaissance flourishes.

On the bottom of Bicycling’s list are Dallas, Memphis, and Miami.

To compile the list, Bicycling editors started with a list of more than 250 cities and narrowed it down using the following factors:

Check out Bicycling.com for more.

I would argue that Detroit, MI is one of the worst. Bike lanes? Everyone, including police, will scream at you to ride on the sidewalks.

As any of you Portlanders who have ridden here can attest, Seattle really shouldn\’t be on the list at all, unless things are much worse throughout the country than I think. Sure, the city council and the mayor have \”unabashedly stated\” on many occasions that they want to make the city as bike freindly as possible, but all that means is that we have more public lip service to cycling than anyone else. Check here http://tinyurl.com/69tbzv and here http://tinyurl.com/69mys6 if you think I exaggerate. Our history dictates that at least three times the cost of any new project must be spent viciously debating it for five years before doing anything real, and even then it can be stopped by just a few \”concerned citizens.\” Even with the challenges you folks face, you are in no danger of being unseated from the top rank by the likes of Seattle.

Seattle should jacked off the list for the mandatory helmet law alone. If the city is so bloody friendly to bikes, then the \”leaders\” of King County would not have felt compelled to protect citizens by making them wear Styrofoam hats.

Last time I was in Seattle with my bike, I was annoyed at the total lack of bike parking. I didn\’t want anything fancy, just the usual staple rack, but I would estimate the density of those at about one-tenth of Portland\’s.

As for Seattle unseating Portland… Um, yeah, good luck with that guys.

We must continue to remind those latte drinking, Sonic loving, pungent sounders just how inferior they are. Sucky beer, lousy sports teams, that goofy Space Needle thingy, and now this.

I have ridden in Seattle lots and I can say without reservation that it does not deserve to be in the same category as Portland.

Seattle hardly ranks with San Francisco or Portland. Memphis is bad, but far, faaaar from the worst. How is DC \’most improved\’ with only stuff they\’re planning on doing?

What criteria, if any, did Bicycling use to make these choices?

Seattle won\’t unseat us, but isn\’t it nice to aim for the top?

I think we should pat \’em on the head and say, \”keep going.\” They might never be up to our caliber, but we shouldn\’t fault them for trying to improve.

By the way, rode in SF for the first time this month, and I gotta say the car drivers there were much nicer and more observant of cyclists than here in P-town. What\’s up with that?

Bismark ND is even getting bikey:

Ihave lived in Boston area and I agree that Boston is one of the most challenging cities to be in on a bicycle. It had been rated as the absolute worst in years paast be bicycyling magazine.

However, next door to Boston are Cambridge and the suburbs to the north and to the west. I found those places to be quite pleasant.

I have biked from the Cambridge area (Arlington) to Saco, Maine, and it was a decent trip.

I\’ve never been to Detroit, Dallas, or Miami, so I cannot comment on those.

I have been to Mexico City (not on a bike)and noticed that the traffic there is among the most hectic. I got nervious in a taxi. Perhaps that city would be one of the worst?

I\’m sure bicycling mag didn\’t have any criteria for making their choices for bike-friendly and unfriendly citues. Much the same that you have no criteria for deciding what an intelligent comment looks like.

\”What criteria, if any, did Bicycling use to make these choices?\”

From their press release:

\” To compile the list, Bicycling editors started with a list of more than 250 cities and narrowed it down using the following factors: cycling-friendly statistics (numbers of bike lanes and routes, bike racks, city projects completed and planned) including changes in these statistics and a city’s future plans since the last survey; bike culture (number of bike commuters, cycling clubs, cycling events, renowned bike shops); and a survey of experts at national bicycle groups such as the League of American Bicyclists, Bikes Belong, the Thunderhead Alliance and the International Mountain Biking Association (IMBA).\”

I\’ve added that to the article.

I think that it\’s funny that Seattle\’s mention is all about how they want to be more like PORTLAND!

Mark (#12) – Boston\’s challenging enough to drive a car in, let alone ride a bike – heck, it was laid out by cows in the 17th century! Fantastic training grounds for Portland\’s Roger Geller, though, as recently noted in Adventure Cyclist. If you can commute by bike there you can plan infrastructure anywhere (or something like that ;).