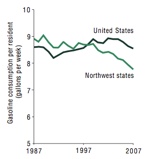 A new report released today by the Sightline Institute says that in 2007, per-capita gasoline consumption in the Pacific Northwest fell to its lowest level since 1966.

The report analyzed Federal Highway Administration and U.S. Census data and found that the 11% drop is the equivalent of every driver in Idaho, Washington, and Oregon taking a five-week holiday from driving in 2007.

Sightline found that gas consumption in our region is about 9 percent below typical US consumption — a testament, they say to the “Northwest’s progress in saving fuel on multiple fronts”.

According to the report Oregonians consumed 7.7 gallons of gasoline per week in 2007 for a total of 1,500,235. That puts Oregon in ninth place in the U.S., but still far behind our neighbors in British Columbia. The report found that residents f the U.S. Northwest burn about 50 percent more gas than our Canadian neighbors.

Read the press release and download a PDF of the full report at Sightline.org.

Hmm… We\’d better figure out what they do right in BC.

Oh right, gas taxes…. Sure to be a popular option down here south of the border.

They also run a lot of LP gas vehicles, and I would be suprised if these were included in the matrix.

edged out by BC,

@5, but Canada has an advantage because they\’re communist.

Gregg, They are not communist. They are Canadian. It\’s like communism but with curling.

I KEED I KEED, I joke with you!

My spouse and I will only buy one tank a week of gas…MAX! This is awesome because it\’s a challenge to us to use as little as possible. Last week, we used only 2/3 tank. My tank holds about 14 gallons. So, that is about 9 gallons of gas for two people in a week. We just rather ride!

My wife and I average a tank of gas about once per month. Neither of us commute by car. Most of the one tank per month is, in fact, used to drive to bike events!

It is good to take a close look at your own energy usage. there are many folks who believe that being green means recycling, and buying green products – sometimes. However, to be actually useful, it means personal behavior change. A tough thing for almost everybody.

I expect we\’ll see gas at $5 per gallon by 2010. That should pretty much kill of Hummers!

Only by 2010, aren\’t you the optimist? I expect $5/gal gas by Inauguration Day 2009, as a present from ExxonMobile to President Obama.

Re my own comment #10. That\’s not right. We drive to visit family. Better make that a tank every two weeks on average.

My concern is that $5/gal gasoline won\’t actually inhibit Hummer drivers. Because they\’re probably somewhat wealthy in the first place… They can afford it.

That being said, I was in France in 1998 and after conversion, we figured they were paying about $5/gal back then. Which shocked us then, but we now see how the US has been underpaying for gas for so long.

In any case, \”Death of Suburbia\” is screening for free this weekend at the Bagdad. I\’m going to try to see it!

On comment #11, I hope you\’re right both ways–gas price and the next President\’s name.

Gas at $5 or $6 would be great for converting more drivers away from their cars…though the morning congestion on the Hawthorne bike lanes would be a real drag. What do we need to do to get a whole lane for bikes?

If there are less drivers, then there\’s less cars, which means less competition for a driving lane– and there\’s nothing that says you have to stay in that bicycle lane.