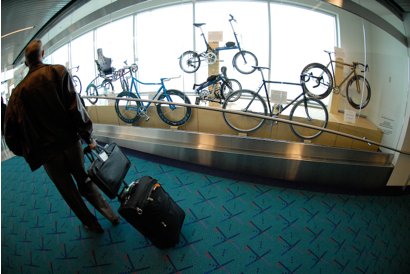 A passenger strolls by the new Handmade exhibit at the Portland Airport. (Slideshow below)
(Photos © J. Maus)

An exhibition of bicycles handmade in Oregon debuted at the Portland Airport today.

The exhibit — which I brought you the details of back in February — is slated to run for six months and airport officials say an estimated 3.3 million passengers will pass by the 40-foot, glass display case.

Since the exhibit is located beyond security gates, only ticketed passengers can view it. I joined a video crew today that was working on a project for the Portland Development Commission (a partner in the exhibit) to gain access and snap some photos (my slideshow is below).

I was full of Oregon pride as I walked up to the display. Passersby peered into the glass, studying the placards that described each of the ten bikes in the exhibit. One guy was so excited by what he saw, he chased down the rest of his group, and dragged them back to show them what he’d found (they were amazed at the 16.75 pound hardwood bike by Renovo).

The photo didn’t come out, but a nice statement about the exhibit was written in stickers on the glass. It said:

The ten examples shown here represent only a few of the builders working in Oregon, but they share a common goal of providing one-of-a-kind, hand-crafted machines with a unique ride.

Each bike had it’s own placard that provided details on the builder, the type of bike, and interesting tidbits — like the material used, or the builder’s inspiration. 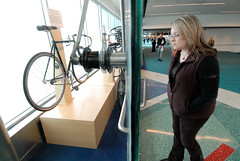 It was also a welcome surprise to see such a diverse range of bikes represented, from a tall “freak bike” built by Mark Veno of the Dropout Bike Club to a cargo trike built by SE Portland resident Bill Stites.

The exhibit was installed with help from River City Bicycles and was made possible through a collaborative effort by the Port of Portland, the Portland Development Commission, the Regional Arts and Culture Council, and Sweetpea Bicycles.

If you don’t plan to fly out of Concourse E at the Portland Airport in the next six months, my slideshow below will have to suffice for now. (The PDC should have their video footage available soon as well.)

Nice! Too bad it\’s behind a security checkpoint (did I read that correctly?) — it would be a nice ride out there on the remaining shreds of the 205 trail to check out the exhibit.

Do your quotes around \”handmade\” indicate some skepticism, or am I over-reading? Certainly the Renovo bike is mostly formed by a CAD router…

I think that the quotes designate that the name of the exhibit is \”handmade\”.

The bikes all involved lots of hand work, even if parts of them are made my machines.

Hey Jeff,
Good point, sort of, but another way of looking at it is that metal frame builders don\’t make their own tubing, they use tubing produced by others on computer controlled machines, then cut it to size, braze/weld and paint.
What Renovo does is similar, but has more steps and perhaps more handwork; Each piece of wood is carefully selected based on color, grain, figure and lack of defects. It’s then measured for moisture content and if necessary, dried to the correct percentage in our dehumidifying oven. The wood is then cut to length for each part of the frame (up to 16 parts per frame before beginning the complex journey to become a bicycle frame; the pieces visit the temperature
controlled laminating room, CNC and oven five times each, and along the way enjoy the attention of four different saws, a planer, and a wide-belt sander, all of which are hand operated. The frame and all components are hand assembled on
an alignment fixture for final bonding,
then oven cured. Finally, the frame is detailed, sanded and finished by hand, which sends it back to the oven three more times. Even worse, we get splinters from all this.

btw,it\’s a CNC router, CAD stands for Computer Aided Design, which work we also do in addition to actually making the bikes.

I\’m throwing down for a Renovo if I ever have money again. {sigh} Carving through a corner at high speed on such a machine must be mind blowing.

What a great display to greet those traveling to, from, and through Portland!

That pursuit bike is so sexy, I must have overlooked it at the NAHBS.

I flew out to Denver on Monday. I was sure I must have missed it when I left…it stopped me in my tracks coming home this afternoon. Cool exhibit…could be the start of a bicycle museum!! Too bad it wasn\’t up for the Show last month.

DOH! I was in the airport today but I didn\’t know to seek this out. Bummer!

Guest
no one in particular

I will be back in Portland for Memorial Weekend and will search for this exhibit when I arive. What a great mix of wonderful machines. From Bill Stites\’s wonderful lean steer trike to Sacha\’s Speedvagon. I coolest part is that I will view the exhibit, head downstairs and pick up my Bike Friday Pocket Rocket, turn the case into a trailer, and ride to my accommodations. I love visiting Portland!

Now all we need to do is build up *THE* bicycle show here, one show to rule them all, like the NAIAS in Detroit is for cars. (North American International Auto Show – Portland\’s \”auto show\” compares with Detroit\’s show about the same as comparing a K-Mart Huffy to a Vanilla)

I\’m going to be there on Monday. I\’ll be sure and check it out. Thanks for the story, Jonathan!

\”Do your quotes around \”handmade\” indicate some skepticism, or am I over-reading?\”

yes, you were over-reading ;-). The quotes were intended to convey the name of the exhibit. I\’ve changed it to italics and I hope that clears up any confusion.

Imagine my surprise when I saw my picture gazing at those lovely bikes little did I realize it was you who asked me to be in the picture. Funny thing is I work there but rarely get up to where the travelling public is. A co-worker who knows of my interest in bicycles said I should check it out. The display is great and like most of the commentators I was drawn to the douglas fir bike…a thing of beauty!

We wandered over from A-concourse to the exhibit last night rather than speeding down to baggage claim. Even the person in our group who didn\’t want to make the hike was drooling and leaving nose-prints on the glass by the time we left. Each of us had a different favorite.

Thanks to Austin and all who made it happen!

Just got back from Washington DC, and I was very excited to pass by and take in the bike exhibit. They are some beautiful pieces of machinery.

badass, i suppose i could buy a refundable ticket…

would be interested in a made to order bike