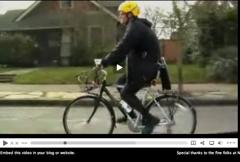 A still from Sam Adams: Man on the Go.
(Watch it below).

If you haven’t seen Commissioner Sam Adams’ mayoral campaign video, you should.

I’m not one to regurgitate political propaganda, but I think this video/campaign ad is worth a few minutes of your time (you can watch it below). It’s a great mix of documentary-style filmmaking (I know you’ve been wanting to see Sam shave) and footage of a politician in action.

It shows Sam feeding his chickens, riding his bike into work, calling in to report a pothole (which of course is filled by the end of the video), and features the obligatory inspirational voiceover and endorsements from community leaders and well-known politicians.

Sit back and watch the film that the Willamette Week has called, “the bar by which all other campaign videos this year will be measured”…

I love this! You go Sam!

Way to go Sam!
Great video, understated yet powerful. Plus the man keeps chickens! How cool is that?

Yes, but do his chickens have bicycles? If not, there\’s no way I can support this candidate.

\”The results are breathtaking and everywhere\”. You hit the mark, Sam.

I support Sam and I saw this fun video at his campaign party last week. Love the chickens, love the pothole call.

However, I would like to make a polite objection to Kimberly Howard\’s statement (in it) that \”Sam Adams is the one person who is looking at how the city is actually growing …not just that it is growing… and wanting to make it a livable city for everyone who lives here.\” Portland is what it is — including a known Mecca for urban planners — because there are SO MANY people at all levels working hard on exactly that issue.

Awww…. It makes me feel good just to watch it.

If it doesn\’t garner his sought mayoral seat, he\’s got the start to a great \”Come make Portland home\” recruitment video.

I am so excited. I just can\’t wait to NOT vote for Sam.

Well steve, I guess that\’s 10 votes for, one against. It\’s looking pretty good for Sam\’s candidacy. Maybe a move is in order?

Scott the other one...

yeah…. I don\’t know if I can vote for Sam or not, but I think the video is excellent.

Yes. Everyone not in favor of a certain candidate should leave the state. They certainly should not have the gall to voice their opinion!

Good thinking there dano. Sure you should even be allowed to vote?

…because the comment board on a bicycling website represents a perfect cross section of the voting public.

steve 14
I\’m merely suggesting that if you don\’t like the way things are progressing here in Portland, maybe another town would be more to your liking. Alot of people seem to be worried that this city might be developing in a novel and progressive way, and unlike many other cities. If that worried me, maybe I\’d find one of those other cities to make my home in, not simply complain about where I did live.

But having said that, it was jerk of me to mock you for being in the minority. I\’ll give you that. I was degrading the conversation, and I\’m sorry and I\’ll try not to do it again.

And GLV 15. That\’s a good point – folks that read this website tend to support candidates that support our interests, with a few grumpy exceptions. I can\’t figure out why they\’re here, unless they find some sort of comfort being in a bitter minority.

This is bikeportland. Not SamAdams4mayor.

I have no trouble with this story. I also like Portland and the direction it is headed. That is why I have lived here for 20 odd years.

I don\’t like Hillary, Obama, or McCain either. i do happen to love many things about my country and neighbors.

Following your logic, I should be considering a move to another country. Perhaps another planet? Actually, you may be on to something!

The Red Queen, \”It takes all the running you can do, to keep in the same place.\”

I think I\’m going to quit going to school and study how many posts, on average, it takes for the readers of this lovely site to start bickering off topic.

Very well done Sam! I share his passion for bikes and super fresh eggs. His coop is much swankier though. Seriously, it will be a great day when Sam is elected.

It sort of seemed like \”This American Life\” doing a Portland Mayoral candidate profile.

I wish when people like steph posted they would attempt to add something to the discussion. \”What a fake\” tells me nothing about why you don\’t support Sam.

#23: And we all know that \”She’s an innocent child who I would assume is just sort of feeling things out as a child of a parent running for office.\”

I think this post is regurgitating political propaganda. I don\’t see the value of just dropping into the blog as is.

There is nothing that requires this site to be unbiased but assuming that all bikeportland.org readers have decided on a candidate doesn\’t seem fair.

I for one am undecided but I will admit that I have begun to question Sam\’s motivation and commitment.

A street fee that only has $24 million in bike improvements in a $400 million package just isn\’t a very convincing \”pro-bike\” agenda to me. Using the deaths of Brett and others as examples of why we need the street fee when only about 5 percent of the money is going to bike safety seems almost exploitive.

Of course Sho benefits from this doubt because I know nothing about him. So how about getting us a little Sho-time (sorry) on the blog?

Give him some questions and a deadline and let\’s compare apples to apples.

how about some music credits?

consider submitting that to a bike film festival:

\”So how about getting us a little Sho-time (sorry) on the blog?\”

It would be easier for me to cover Sho if he actually had come out with some issue papers on things like transportation and bikes.

I have nothing against Sho…I simply don\’t know him yet.

I know Sam. I like him both as a politician and as a regular person who lives near my neighborhood.

I look forward to getting to know Sho and covering him when I can.

That\’s a fantastic video whether or not you are for him. I\’ve been really interested in watching how the obama/clinton campaign\’s have used new media and how it has paid off. I have to say Obama\’s campaign is marvelous tying his identity (http://www.underconsideration.com/speakup/archives/004262.html) in with social networking sites and viral videos (http://www.youtube.com/watch?v=jjXyqcx-mYY ) and have everything tie into his speeches as well.

well this is a bit of a tangent, but what I meant to say is that it is good to see a local candidate so eloquently use new media when mega-budget politicians are just getting the hang of it.

I completely agree with you Gabriel.

Sho seems to be the invisible mayoral candidate. Adams? He\’s not perfect. Who is? He is however, attempting to do positive things, and in the process, has made various miscalculations, learning from the experience I hope. He\’s got the kind of enthusiasm and positive ideals that Portland needs.

To Sho Dozono\’s credit, I will offer this: the other night on OPB during a pledge night for Steve the travel guy\’s show, I think I spotted Sho in the studio phone banks taking pledges with all the rest of the voluteers. Azumana travel was one of the groups taking calls that night. He gets my support for that kind of effort.

TO Freddy, Bjorn and Matthew

Nobody is probably reading this post anymore, but some friends of mine in the bike community told me about this series of posts that assumes content from Steph Dozono.

I see Steph often, and I know that wasn\’t Steph Dozono. I think for the three posters who assumed it was her were obviously setting up a ploy to make it look like Steph would say something negative about Sam like that.

It\’s important to remember that it\’s the Sam Adams campaign that has a reputation for being negative in the Mayor\’s race, not Sho\’s campaign. This is not me taking a side, but putting this dialogue in perspective

So to correct the record – it was not Steph who wrote that, and the mean-spiritedness that was exhibited here is only dividing the cycling community. Just because a \”Steph\” posts about Sam Adams, doesn\’t mean it is the Steph we all know.

I worked side by side with Steph at the BTA for a year and for one, anyone who reads this should recognize that Steph is a bike advocate herself but doesn\’t care for these blogs and does not visit Bike Portland, except when she heard that there was a negative blogging effort here.

Even in these posts here I see two others from former BTA staff who know Steph from her advocacy work – Jessica Roberts and Kassandra.

I think those of us who care about the cycling progress moving forward, owe it to our fellow advocates not to take them down – at the end of the day we\’re all working towards a place in which cyclists can move about in a more safe environment, and we can\’t afford to lose advocates through division and overly manic Sam supporters.

Well Said \”anonymous former BTA staff member\” Can\’t we all just get along. :0)