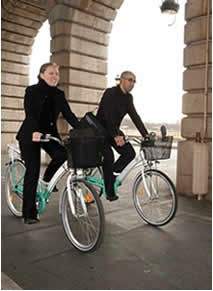 Portland is currently considering three bids to develop a bike-sharing and rental system in downtown similar to one that has become a major success in Paris.

The three companies who are still in the running to provide the service are global media giant Clear Channel, the Portland Bike Company (I detailed their plans back in November), and Library Bikes, a former non-profit based in Arcata, California.

According to LibraryBikes.org’s director Bill Burton, they have purchased a container of the exact bikes that were used by Parisian company Roue Libre, an outfit that proceded, and offered rental bikes on a smaller scale than the massive Velib program now in use. 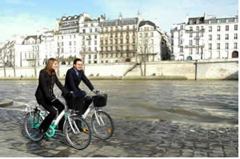 Burton has just announced that he’ll hold a press conference in downtown Portland at 11:00 am this morning near the bike racks in front of City Hall at 1120 SW 5th Ave.

LibraryBikes.org’s proposal describes a system they refer to as “Call a Bike” and it will include 500 short-term rental bikes that will be available 24 hours a day. Each bicycle will have a phone number to call to get the release code for the individual bike and the customer will use a credit card to secure the rental and the first half-hour would be free.

You can download their complete, 9-page proposal here (PDF).

That is really cool. One thing that I think would be really fantastic would be to have a bike rental place at the airport. . .

I saw a whole bunch of these bikes locked up downtown recently. Now I know what they\’re all about! Awesome!

Would these be all over the place conveniently like zip cars, or in one stationary place?

Man I\’d love to be able to nab a paybike when friends want to go ride around with me.

I love the idea, but I\’m still very skeptical about it\’s success in Portland. I\’m still not sure who the target market is.

For a mostly flat city with tons of attractions, like Washington D.C. or Paris, this would be a great thing. Who\’s going to rent a bike to get around Portland that doesn\’t already have one?

Wont happen.
Having your personal bike in Paris is not as easy as here:
– Appartements are closets.
– Your bike will get stolen if left in the streets.
– Public transportation services are on strike every three months.

Another bike rental company makes sense, but the Velib will not happen in Portland.

A discussion of Velib and whether it would work in London. Food for thought for Portland:

Bill – good to see that you are still in the game.

Your proposal takes my mind back to those same Roue Libre bikes that you and I rode together in our Paris adventure with Oliver during VeloCity 03.

Though these bikes are ok (better than Copenhaven but worse than others)…I would hope your proposal would upgrade some of the accessories on the Paris bikes (hub dynamo, better racks, etc.)

(Jonathan – let me know if you need a pic of Bill on one of these bikes.)

Having been in Paris and Barcelona in the past month, the bike rental program was great in both cities. There is the fact that Portland is not that big of a city and much like most American cities, it is built on a grid system of planning.

Living space is smaller in europe, but at the same time there is no shortage of people with their own bikes. Can\’t predict how any of these options would work in Portland. That is all the more reason to give it a go. If we can predict everything, why even bother with things.

So far in my early study of shared bike programmes – the unusual \’failure\’ of modern public bike programmes were in the Netherlands. Both the Stadfiets (Rotterdam) and the DepoFiets/ aka White Bike 2 (Amsterdam) of the 1990s/early 2000s took two different approaches and both closed after a few years.

Perhaps the lessons learned are those being addressed by the current cluster of programmes:
– start big and have a network of decentralized stations citywide;
– start in cities with an large untapped demand for bike access (vs. cities with already a high bike modal share/ ownership and less untapped demand, plus preexisting bike rental services; and possibly
– paradoxically programmes should be started in only communities with strong self identified core of bicycle support vs. in communities with none (autocentric cities) or in cities where everyone bikes thus bicycling is not seen as a special activity (Amsterdam etc.).

that would be really neat.
as long as it\’s better than this:
http://www.youtube.com/watch?v=sz3q_6lkD8s