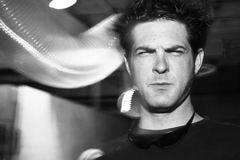 Cody was a professional artist, specializing in horror make-up and props (the Willamette Week wrote a story about his work last year). Cody was also a friend of many people in the community and a regular Zoobomber. 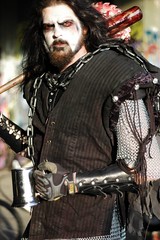 Word of his untimely death (he was only 28) spread quickly on the Zoobomb forum and plans are set for a memorial Zoobomb tonight, proceeded by a potluck and gathering of friends.

After taking some unforgettable photos of him at last year’s Mini Bike Winter Chariot Wars event (how can you forget that face!?), I finally met the man behind the make-up at a potluck brunch held before this year’s Chariot Wars. It was hard to believe this kind, unassuming man was the same person I knew only from my photographs.

Cody’s friends on the Zoobomb forum describe him as being, “amazingly talented” and a “gentle giant.”

His art and his presence will be missed.

I once watched cody on a mini get broadsided by a fixie rider while at full speed. the fixie rider was thrown over his handlebars immediately. cody barely flinched. the next day, he whomped me good on the head with his saw-blade covered bat at the chariot wars.

I didn\’t know Cory but I can\’t stop crying. To his friends and family: I\’m so sorry for your loss. My heart is with you, wishing you peace.

We just had a great time up on the hill sharing memories and celebrating the life of one of the kindest people to ever grace the Portland bike scene.

Very sad. I\’m sorry I couldn\’t make the dinner. Maybe a chariot race trophy or event at bike summer/winter could be named after him – iit won\’t bring him back but….

We will all love you forever, my baby. You are so special to me.

I went to school with Cody, was in a couple of productions with him as well as in art class with him… Very fortunate to see his amazing talent in it\’s early stages… What a horrible loss. Prayers go out to his friends & family…

Thanks to my spouse there is now a web site with a Paypal option for donations. The snail mail info is also listed. A banner for you to link back to the site is available at the bottom of the page. Please share the site with others.