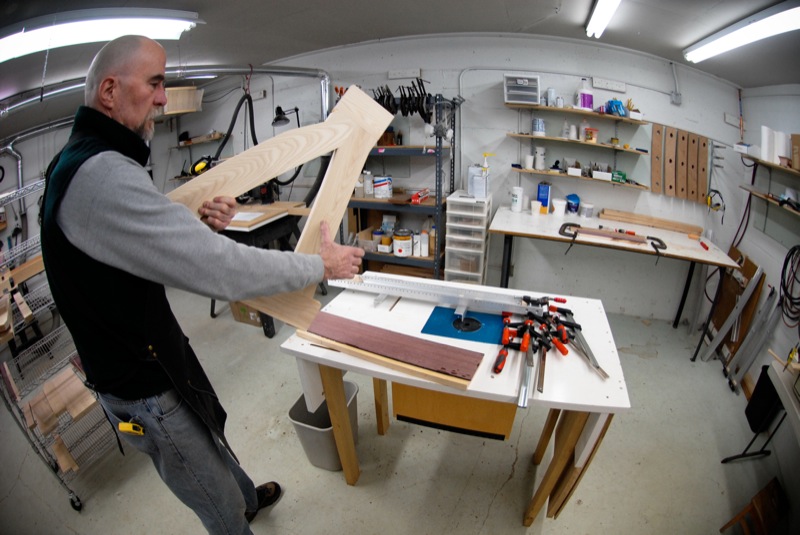 Ken Wheeler sets up a frame in his shop in Southeast Portland.
(Photos © J. Maus)

Ken Wheeler is teaching an old material new tricks — and in the process, he’s doing something that is literally on the cutting edge of framebuilding.


After I noticed his name on the list of exhibitors for the upcoming North American Handmade Bicycle Show (NAHBS), I had to pay him a visit. What I saw was surprising and impressive.

Wheeler, who has ridden bikes his entire life, is the former owner and CEO of a 75-employee business that designed and produced composite airplanes in Gig Harbor, Washington. Three years ago, he moved on from that company and came to Portland (from Seattle) to start up a wood carpentry business making high-quality, wooden camp kitchens, fly-fishing tackle boxes, and other items. 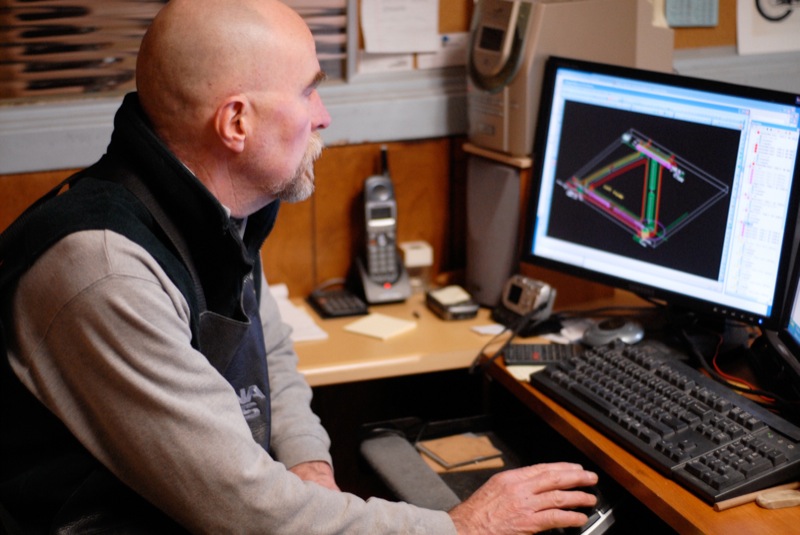 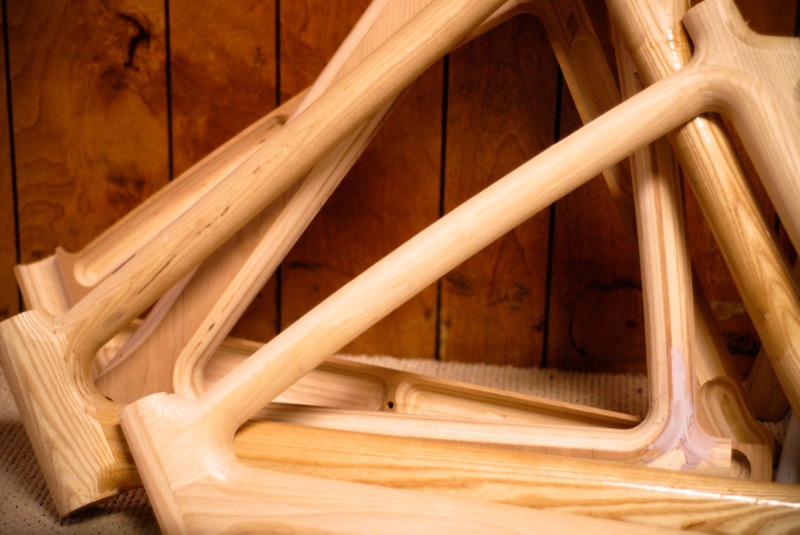 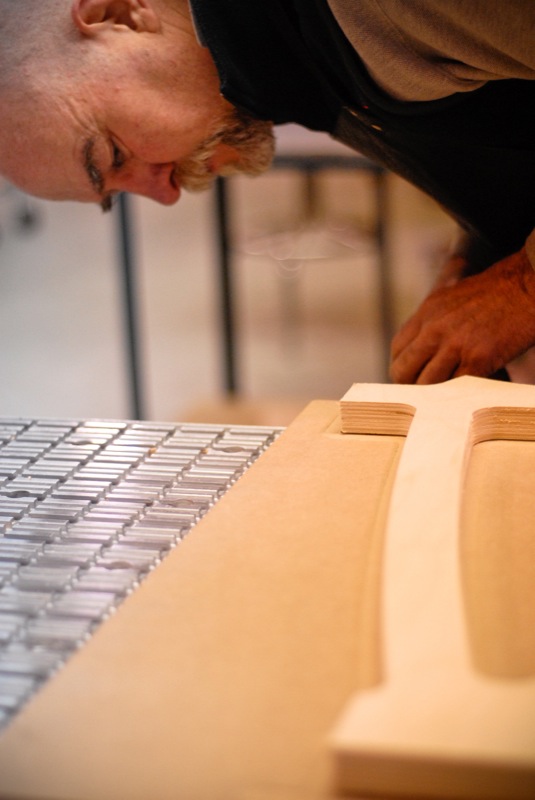 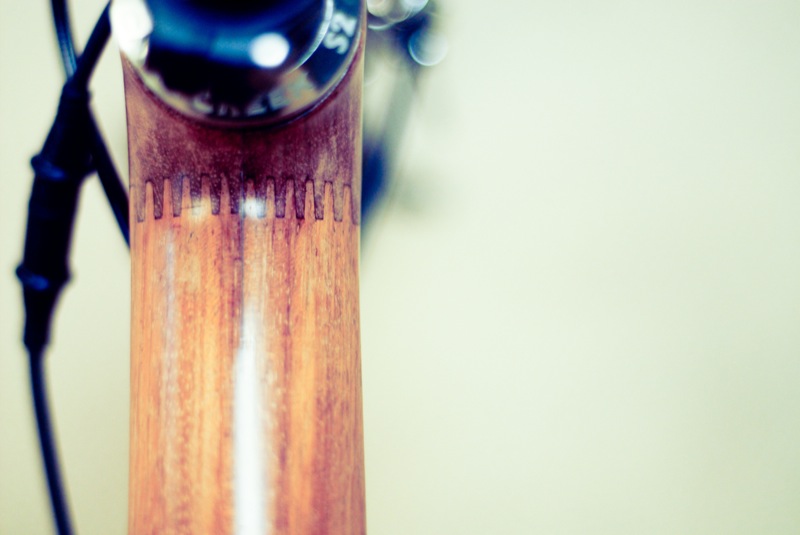 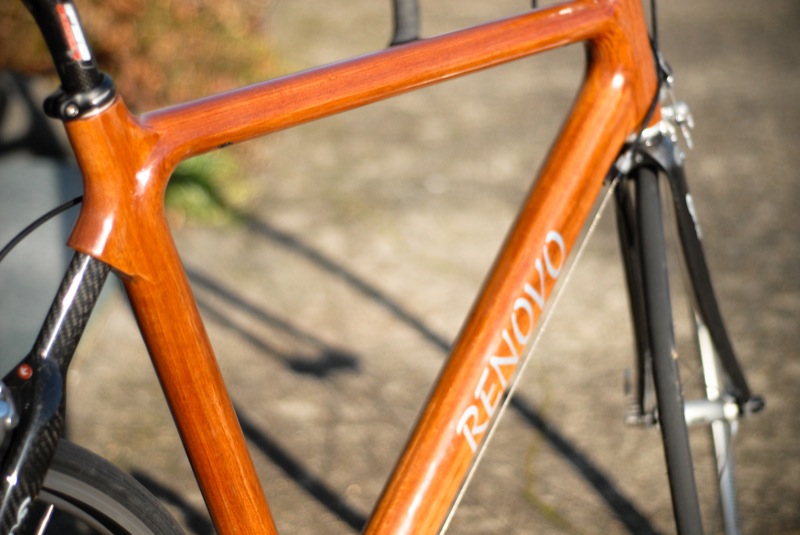 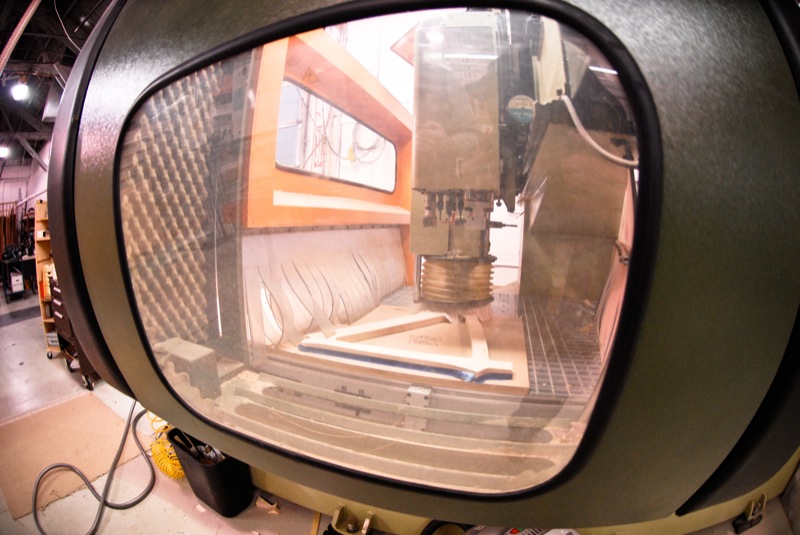 One day, Wheeler leaned his bike up against his CNC machine and the light bulb went off: “I wondered to myself…could I build a bike?”

Wheeler is no stranger to high-end wood and metal fabrication. While touring his shop, he pointed out a poster of Italian-made “Falco” wooden airplanes that he admires and he is a veteran aircraft mechanic with years of metalwork and welding under his belt.

Fast forward to last summer and Wheeler had made his first prototype CNC’d wooden bicycle. “That proved the concept,” he said, “and I’ve been testing, researching, and building ever since.” 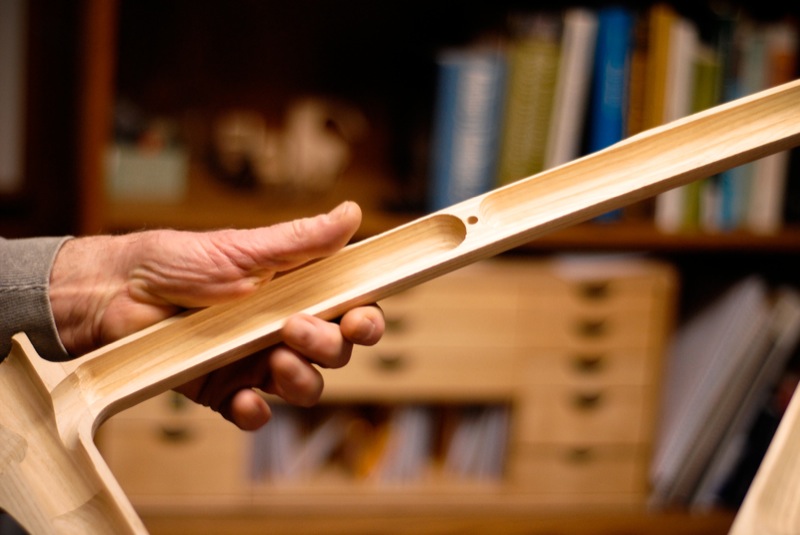 Also during my visit, I watched Wheeler do a test run on the CNC machine (he runs plywood through first to make sure his calculations are accurate). I was stunned. I watched a CNC machine hover over the slab of wood with hard edges and no finish work yet done on it. It whirred and cut with absolute precision, perfectly rounding edges and hollowing out the wood.

Wheeler looked at me and said, “It should done in about five or six minutes.” 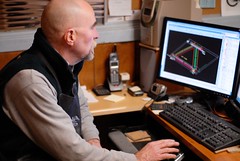 Wheeler lays out the frames in software
that runs the CNC machine.

This was a stark contrast to the painstaking work I’ve watched in other local shops, where framebuilders hunch over one weld, tirelessly sanding steel for hours on end.

Was I witness to the beginning of a framebuilding revolution?

Wheeler says he’s identified 53 different hardwoods that have the hardness, elasticity, machinability, and other characteristics necessary for making bicycles. Some of his favorites include Brazilian cherry, vertical grain fir, jatoba, and purple heart. All the wood is either FSC certified or is sustainable and plantation-grown

He’s put his wooden tubing samples up against Easton aluminum. The result? “We beat aluminum every time,” Wheeler says with a smile.

But can his hardwood bikes — which can weigh as little as 16 pounds fully built — beat the competition? Wheeler’s friend Joe Hall, a professional triathlete, will ride a Renovo in the Hawaiian Ironman competition this summer and Gateway Bicycles owner Keith Willis claims the bike is “Cervelo quality.”

Wheeler has big plans for Renovo. “The way these are made lends itself to high volume production.” He’ll debut them to the world tomorrow at the NAHBS, and he plans to attend Interbike later this year.

Check out RenovoBikes.com for more information.

And I thought wood surfboards were cool. http://www.grainsurfboards.com/
Those bikes are beautiful! very nice job Ken, I am impressed.

sign me up. (ok once I have funds … which will be never)

So I have a geek question.

How does he not split the head tube when he presses in a headset?

Is there a metal insert?

Is there a metal insert?

tonyt – You guessed it, there\’s a metal insert. It\’s a titanium sleeve that goes all the way through the headtube. I pressed in two of the headsets just this evening during last minute preparations for the show. It was a nice tight fit, and the cups slid in smoothly. You should see the headsets he chose, they\’re beautiful. Polished titanium with wood inserts, they complement the frames nicely.

I was lucky enough to take a short test ride on one of the earlier prototypes last year. The ride quality was impressive. The bike was stiff enough for good power transfer, but smoother than any steel or carbon I\’ve ridden.

What the heck? Do they let Marines ride bikes, Lt. sir? Well Stu, do they??

“We beat aluminum every time,” Wheeler says with a smile.

Well sure. Any sailor could tell ya that. 🙂

kamajii you obviously haven\’t heard about the paratroop Marines being issued folding mountain bikes starting back in 2001. The clincher was an execise where marines with the folding MTB reached their objective from an insertion point hours faster than the squad on foot, no more tired than the foot squad and were just as effective in the simulated battle as the foot squad. And the bike squad was just as stealthy as the foot squad, too. Pity there are so few opportunities to use the bike-equipped Marines except in Afghanistan.

And that bike above is super cool…

Do you have a link to that article/report, Opus?

Having worked in a high-end wood shop for 5 years while getting my design business going, I\’ve worked with a lot of the woods mentioned. I never thought of making a bicycle with them …

And the precision of CNC, which I\’m also familiar with, is a match made in heaven.

I\’ll see if I can dig that report up a.O definitely an interesting read.

a.O. this was all I could find off the bat: http://www.combatreform.com/atb.htm Lots of mission reports on that site, which is devoted to the history of the bicycle in war and combat.

This should help things along:
http://www.treehugger.com/files/2008/02/reinventing_the_1.php

a.O. this is the manufacturer\’s web site http://www.militarybikes.com/military.html These are the same guys that make the HUMMER folding bike (which is based on the same technology). I think this discussion probably belongs somewhere else than this thread.

This makes me very sad, not just for mr. Wheeler but because it is another signpost along the road telling us our fair city is quickly turning from a community of Artisans, Bikebuilders, Musicians and Brewers into a burg of clerks, call center staffers, orderlies and real estate hustlers.Perhaps it is the March of progress, or just the realities of the costs and requirements of the modern world. But darn I miss the days when everyone I met did something cool for a living and got everywhere on a bike.