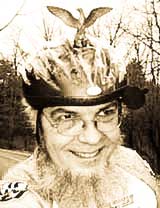 In a city that prides itself of two-wheeled self-reliance, it’s not surprising that Sheldon Brown’s death has had a major impact.

Many Portlanders have shared their memories and feelings of great loss at the passing of someone who defies description. Part obscure bike part information guru, part cycling ambassador, part writer.

One commenter referred to him as a “Renaissance man”.

“I had the pleasure of meeting Sheldon while conducting research for Giant Bicycles. His basement headquarters was an Alladin’s cave of obscure and hard to get gear and Sheldon was a gentleman and a great host. We played a game for a couple hours with me trying to come up with really obscure components and him locating the said part. Sach’s Duopar long cage rear mech? Third row, bottom shelf on the right. French threaded Stronglight alloy headset? Sixth row, second shelf down on the left and so on and until I ran out of ideas.”

Portland author and Bicycling Magazine columnist Joe “Metal Cowboy” Kurmaskie called him a “true original”. Many other readers recalled how Brown played a significant role in getting them on a bike, or making their time on a bike more enjoyable by way of his vast trove of how-to articles.

Many people also remembered Brown’s humorous April Fools articles. In light of that there several people think it would be fitting to organize a memorial ride for him on April 1st.

If you’d like to see this ride happen, or have time to volunteer to help organize it, please use the comments below as a way to connect with others in the community.

Once details of the ride are confirmed I will post them.

There has also been a website set up in his honor at SheldonBrown.blogspot.com.

Hey Jonathan, thanks for mentioning the April 1st ride! Joe and I are coordinating/leading it and we\’re currently soliciting local bikey folk for ideas about ride routes and activities. There are more details on the Shift list, too.

I think it would be entertaining to have a Sheldon Brown look alike contest. I also would be willing to make up some Sheldon Brown memorial spoke cards.

Hollie, I think your idea for a memorial ride on April 1 is a good one. Just so you know, there is talk across the country of organizing a memorial ride. Hopefully, this could become an annual event in memory of Sheldon Brown.

Given that it\’s (at least) nationwide in scope, though, I think it\’s important for cyclists to reach some kind of consensus on the date. The idea for a memorial ride was first broached on bikeforums.net (as far as I\’m aware), and the only date tnat\’s been proposed so far is July 14, Sheldon\’s birthday (and Bastille Day– a fitting birthday for Sheldon \”Francophile\” Brown).

I think your suggestion of April 1 is at least as good as the July 14 date, and of course Portland can go its own way, but I would hope that this could become an annual ride celebrating Sheldon\’s life wherever he has fans– and that would mean some kind of broad consensus on the date.

I\’ll pass the April 1 date on as a suggestion, but if there\’s a strong consensus for a different date, would you consider organizing the ride on the consensus date (as a practical matter, I think people will probably go for the April 1 date.)?

Whenever the ride is, looks like I\’m going to have to get one of my French bikes up and running soon…

Thanks Jonathan. Sheldon didn\’t have a Bike Friday, but we used his gear inch calculator every day!
Here\’s a small-wheel tribute to the \’Grand Wiki of bicycle bells, whistles, and everything below the saddle\’ …
http://www.bikefriday.com/sheldonbrown

I think it would be entertaining to have a Sheldon Brown look alike contest.

I think Sheldon beards would be de rigeur for an April 1st Sheldon memorial ride.

Metal Cowboy here. Please keep posting your suggestions for the Sheldon Brown April 1st ride her and/or sending myself or hollie ideas – I lvoe the SB lookalike contest – I pedal around portland swear I see him a couple times a day.

At any rate, my first reaction to the July 14th date for a national ride is that we should go for the April fool\’s local ride this first year and see where things go on the national level – nto opposed to changing date in the future but there\’s no reason we can\’t do two SB rides this first year.

Unless anyone in the Portland bike community think we need a better excuse for an extra bike ride?!

rixtir, thanks for the info! I haven\’t been keeping up with the hubbub over on bikeforums, but it sounds like I ought to. I love the idea of a bunch of rides happening at the same time across the country and that was my original idea. I very much agree that there ought to be an annual ride in his honor.

I\’ve so far had suggestions that we visit various bike shops (a pivotal part of his life), Sheldon Brown beard contests, food stops (including all of us going through a drive-thru), a show and tell of nutty bike parts, and a visit to OMSI. I love the lookalike contest idea! I also found a source for Igor the Eagle and plan to get a bunch and pass them out at the ride for folks to put on their helmets.

Okay, time to head over to bikeforums and chime in on the April 1st date. I admit that his birthday is a pretty good idea, too– June\’s a long way away, tho!

Just check this dude rigs and it was clearly known he was a mavrick in the cycling world.

He lived a great life 🙂

per the spoke card idea:

I would surely participate in such a ride to remember Sheldon.

While I didn\’t know him personally, he was a super-reliable resource for info and widgets to the recumbent community; he was basically an all inclusive kind of guy.

\’Tis true that his website is voluminous, but I wonder if he wrote a book to capture his deep, deep knowledge???

OK I will try to organize a ride 04/01 for the North Texas area, probably around White Rock Lake bike trail. I wish my bros in PDX good luck in setting theirs up.

Opus not sure if you hit the dorba.org if you do.. Please hit up the general forum and feel free to make some suggestions.

Howsabout making a visual record (video & images) of the ride(s)and posting them on a national Sheldon Brown Memorial blog? I have a Bakfeits (makes a great platform for filming) and I might be able to get my hands on a decent video camera. If we can get the word out to other people organizing similar rides to make a visual record it could be pretty cool.

Micheal – that sounds like a great idea – If other cities take on the April 1st ride as the date – and it looks like it might go that way- we\’ll post the idea on bikeforums and at sheldons guest book to other groups to see if they will have people on the ride that can shoot footage.

Look forward to seeing you at the ride – or before, perhaps at the worst day of the year ride or handmade show.

I\’m organizing my club, RBENT, I don\’t have any control over what other groups do. Initial planning was for a 1800 (6PM) ride start from the same rally point as the Ride of Silence, over on W. Lawther. You guys in DORBA can show up or not, we guys from RBENT will be ther on the funny looking bikes.

It appears on Bikeforums that people have taken to the idea of an April 1st memorial ride, so that should be the nationwide date this year, in my opinion.

And who knows, I might take one of my French bikes out on Bastille Day anyway. 😉

\’Tis true that his website is voluminous, but I wonder if he wrote a book to capture his deep, deep knowledge???

I emailed Sheldon Brown to ask if there was any chance his website would ever be available in book format. His reply: \”I would love to do a book or two sometime, but inertia is a terrible thing. What I really need is an agent to light a fire under me and help contact publishers.\”

hello all, I am bummed out as you are about Sheldons death although I never met him and most all of us havn\’t he had an immesurable impact on the cycling community. I currently make stickers and I decided to design a sticker to give to people in his honor. email me or look for me at the bike events this weekend (pink hair) I will give you one for your bike bikepunkprinting@gmail.com
see ya
mike

I like the idea of a memorial ride very much, but is there a clear reason for choosing April Fools Day to celebrate someone\’s life? It carries the connotation that Brown\’s untimely death may be a hoax and I\’m guessing that more than a few people will believe it\’s a joke. In order to avoid any confusion and to place the focus entirely on Sheldon Brown, I would suggest moving it to another day, preferably a weekend day, like Sunday, so that more people can participate. Just a suggestion.

Yes, there is a reason. See:

Ride on Reynolds Day. May 31st.
Sheldon did.
That\’s no joke.
Although life is an absurd one.
April Fool\’s isn\’t such a bad day.