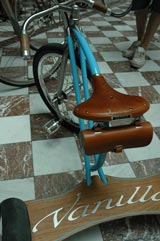 The Vanilla tricycle on display at
the 2006 Made in Portland
Bike Show.
(Photo © Jonathan Maus)

An upcoming exhibit at the San Francisco Museum of Craft and Design will feature a custom tricycle designed by Portland-based bike builder Sacha White.

The article says the exhibit, “will shine a deserved spotlight on West Coast designers who might otherwise be ignored in an international setting where the name brand is king.”

White’s tricycle won “Best in Show” when it debuted at the 2006 North American Handmade Bicycle Show.

More info on the exhibit:

Having my shop in the same building as Sacha for the past 5+ years, I\’ve witnessed the amazing evolution of Vanilla firsthand.

Sure, he had a high baseline of talent going in, but I can tell you that he works very hard – putting in a lot of hours to consistently improve his craft.

This is an great response to a person doing something beautiful and revolutionary in the bicycle industry. Sacha White is melding clasic lines with a modern twist and it\’s great to see the public apprectiating such an extrodinary artist whose paint brush is a torch, and canvas, tubes of steel. Well done.

I remember seeing this trike at a First Thursday exhibit at City Hall. It\’s indeed a work of art, as are all of the bikes that Sacha makes. there are definitely some beautiful bikes coming from Portland\’s bike builders, Vanilla is one of many great handbuilt bike companies here.