An image of Brett Jarolimek may soon replace the silhouette on the left
and become part of the official logo for the Oregon Bicycle Racing Association.

Last Thursday, maintenance crews painted over a memorial stencil that had been created by friends of Brett Jarolimek. While the stencil’s creators (who went to art school with Jarolimek) consider working with ODOT on a permanent memorial, the moving image will live on in other ways.

One of the co-creators of the stencil left a comment over the weekend that said:

“We are going to be working on ways to give it a permanent legal home — hopefully where he was killed. It was a stencil so it can repainted anywhere, anytime we choose. We will see his image return soon enough.” 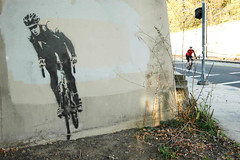 The stencil before it was painted over.
(Photo © Jonathan Maus)

On Saturday, the Oregon Bicycle Racing Association’s (OBRA) director Candi Murray, sent an email to members to gauge feedback on the possibility of using the stencil/silhouette image on the official OBRA logo. She wrote, “I thought about how we might keep his memory alive for our members.”

One reader replied and wrote that Murray’s idea, “completely transcends any need for the involvement of state or local bureaucracy to make it live on.”

Another idea Murray received in response was to “take it a step further” and create special edition hats, stickers and t-shirts with the image and give all proceeds to the Brett Jarolimek Memorial Fund.

Nothing is finalized yet, but I have talked to one of the stencil’s creators and he has already expressed willingness to work with OBRA on the project.

I also heard from Bike Gallery owner Jay Graves over the weekend. Graves said Jarolimek’s bike hangs from the ceiling of the Hollywood location (where he was an employee) and they plan to paint the stencil on a nearby wall.

The memorial cyclist stencil image is a nice one. I\’m curious about how the stencil\’s creators arrived upon that particular image for the memorial. Anyone know whether it was derived from an actual photo or drawing of or by Brett Jorilimek?

\”Anyone know whether it was derived from an actual photo or drawing of or by Brett Jorilimek?\”

wsbob, it was derived from the photo below by Bob Libby that was taken at the Cross Crusade race at Ranier High School this past season (a day before Brett was killed).

Here\’s the image (link to original):

The stencil I beleive is based on an actual photo of Brett racing at the Cross Crusade race at Ranier High School the day before he died. It is this particualar race that he had his best ever result in the very competitive Single Speed category…3rd place out of 69 racers! I beleive this a very fitting image for OBRA to use as it shows someone near and dear to all us at his best-having fun, sharing the experience, encouraging others and racing to a podium spot-only hours before he was tragically taken from us. Let\’s hope that a permanent and legal memorial can return to the Bridge.

It would be nice if we could salute Charles Christensen, too. You may recall that he died in a race at PIR just two years ago.

What a beautiful, wonderful, powerful way to keep Brett\’s legacy–and that of other cyclists–alive. All without getting into the muck of city politics and legal hair-splitting. It may not have the visibility of a publicly placed stencil, but I bet it gets wide circulation in other ways.

Hey Jonathan, thanks for that background info. The stenciled image being an actual visual record of Brett Jorilimek in addition to a work of art in itself, significantl enhances the meaning it can offer to those that experience it. Bob Libby….really nice original photo too!

This is not really related to this topic, but I just read this story on bike path art:

Good for OBRA. The power (and the thoughfulness) behind Oregon racing.

Thank you for remembering about Charley. It sounds like a silly thing to say, but I was one of his closest friends for 17 years. I think of him often, and I am proud to know that others remember him, too. Thanks.