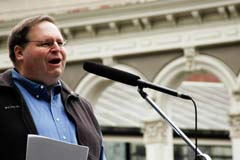 This morning in front Skidmore Fountain, as MAX trains rumbled by, a small group of supporters and onlookers heard transportation and neighborhood activist Chris Smith make the first speech of his campaign for Portland City Council.

I’ve seen and heard Smith at countless meetings over the years, but now it’s a whole new ballgame.

I’m excited for the potential that someone with so much transportation and bicycle smarts might become a city commissioner (especially if he’s sitting next to Sam Adams).

During his speech, Smith outlined some of the reasons he “fell in love with Oregon” when he moved here 20 years ago. Not surprisingly, most of the things he loves have to do with transportation. From the speech:

“I love the 200-foot blocks that make Portland so walkable and always keep the sky in view.

I love that a lot of us leave our cars at home and take transit – by choice, not by necessity.

I love that we killed a freeway project and build a light rail system instead. And ripped out another freeway to re-connect our downtown to the river.

…I love that we realized that the transportation system that originally spawned so many of those neighborhoods that we love, the Streetcar, could build new neighborhoods and add even more vitality to our city.

I love that we drive more hybrid vehicles per capita by far than another other U.S. city. I love that our bikeways sometimes have congestion and that once a year we close our bridges so that tens of thousands of us can swarm over them on bikes and on foot.”

Check out video footage below thanks to Dan Kaufman of CrankMyChain! Cycle TV:

Good luck Chris! I always thought that Catherine Ciarlo would make a good city councilor, maybe we can get her to run for one of the other open spots on the council?

Chris will make a great city councilor! He\’s got my support 100%.

Bloggers Becoming Candidates. This is a good trend. A transportation blogger running for city council in Portland. You got to love this town.

Chris has passion AND patience…a wonderful combination I can only envy.
He will be a great addition to City Council.