Dave Aldersebaes moved to Portland just one year ago, but, as founder and leader of the Ironclad Cycling Team, he has already made an impact. 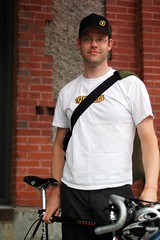 With an eye toward combining his work and his passion for cycling, Aldersebaes hatched an idea. He knew Ironclad’s work gloves were perfect for riding, so why not sponsor a team? When he realized how much his company spent on one, full-page advertisement in a construction trade magazine, he figured he could do a lot more for a lot less.

So, one day last fall he asked his boss, “What if I could offer you 20 rolling billboards for half what we spend on one ad?”. His boss took the bait and Team Ironclad was born.

The veteran of several Midwestern cycling teams, Aldersebaes is also the founder of Evil Cycling, a loose network of cyclists throughout the country usually brought together by RAGBRAI (the infamous ride across Iowa).

From these past experiences along with his connections at Ironclad, he drew plans together for his new team. 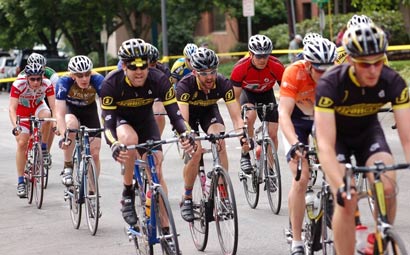 Whereas some “teams” are filled by riders who simply purchase jerseys and show up at races, Ironclad, Aldersebaes felt, was going to be different. Not only would this team be united through its uniforms, but – more importantly – they would race and work as a team. To ensure this, the team’s focus began develop around novice racers.

However, the issue still remained of finding said racers. Luckily, his girlfriend had recently enrolled at Portland State University and also joined the PSU Cycling Team. The majority of the PSU squad was made up of neophyte racers, and Aldersebaes saw a perfect opportunity to help build the Ironclad team. Ranging from an environmental engineer, to two native Texans, to two ex-Army Rangers, the new team is a spectrum of diverse interests and backgrounds. 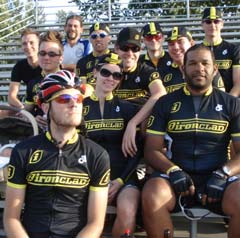 The team in the stands at PIR.
(Photo: Team Ironclad)

Yet this motley assortment of cyclists all shared a basic enthusiasm for the sport and commitment towards teamwork. “As a member of the PSU Cycling Team I was looking for a team to become active with during the non-collegiate season,” noted team member Greg Hudson, “I wanted a team that promoted having fun while racing, rather than the race results being the priority and bottom line.”

Cyclists with the same mentality as Hudson began gravitating towards the team, and soon the roster was full.

Despite having a group of twenty eager racers, Aldersebaes emphasizes learning and development over results. Winning and podium spots are coveted for obvious reasons, but Aldersebaes feels that, “improvement as a team, selflessness, and riders evolving is far more important to me than wins and losses… if the team executed the plan as best they could, did their jobs and rode selflessly, and we got a 5th or a 6th or a 10th place finish, it would feel like a win,” 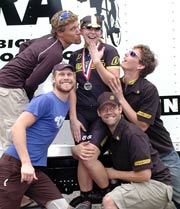 The smaller victories, such as a winning a bunch sprint or protecting a teammate during a race, can be overlooked in general results. Aldersebaes clearly believes in the influential role that technique and teamwork play in a team’s success. As he simply puts it, “a well drilled team of lesser riders can increase their chances of a good result against stronger but disorganized riders any day.”

With both men and women racers consistently placing in the top ten throughout the season, Ironclad’s results have made the Portland cycling scene take notice. A few team members have competed in mountain bike races and at Alpenrose track. And naturally – this being Portland – there are plans to keep the Ironclad name in the results throughout the cyclocross season.

Aldersebaes has chronicled the team’s rise on their official blog and it’s clear in reading the entries that not only did they have a great season, but they had a lot of fun doing it. 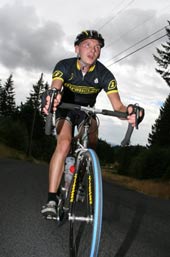 Even Ironclad CEO Ed Jaeger has taken notice and says, “I’m excited to have the brand seen by a whole new market…we’re proud of all of our riders for flying the Ironclad flag!”

With a successful first year under their belt, Aldersebaes has his sights set on bigger and more difficult races in 2008. One of his goals for next year is to send a rider or two to race the Manhattan Beach Grand Prix, one of California’s biggest races which happens to take place just a few miles from Ironclad’s corporate HQ in El Segundo.

Yet with constant the buzz about the team, Aldersebaes is clear that his squad will remain small and tight-knit. Whether showing up to cheer at races, acting as podium girls (or boys) for a victory photo (see below), or leading out a teammate for the finish, the team’s support of each other is constant and unwavering.

For instance, when team member Josh Hunt broke his collarbone during a criterium, the team came together to donate money for his hospital bill.

Like a proud papa, Aldersebaes takes pride in seeing what he calls, “a group of vastly different individuals come together and fight and suffer as a team.”

That devotion, to cycling and each other, is what makes Ironclad both distinct and successful.

You can meet members of Team Ironclad and give the team a test ride this Sunday when they host a “Meet the Team Ride”. Learn more on the Oregon Bicycle Racing Association (OBRA) website.

thanks for the article, Jonathan. i\’ve been reading their blog for a while and the team seems to have an amazing dynamic going on. everyone should help pitch in for Josh Hunt\’s broken bone, not broken spirit! dollas taken via paypal: smashedcollarbone@gmail.com. woo!

my pleasure Bearhat… but want to point out that Stephanie Chase wrote most of it! She\’s not only a member of the team but she\’s also my up-and-coming racing contributor. Stay tuned for her series on being a cyclocross newbie…

I gotta say, they are a really fun bunch with hearts of gold. 🙂