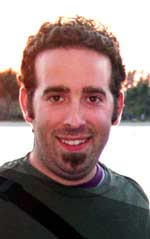 Long before that, he was walking down NE Alberta Street when a locked-up bike caught his eye,

“When I started to look more closely I was amazed, it was beautiful, and the details were really really interesting.”

The bike was a Vanilla, handmade in Portland by Sacha White.

“That night I looked up Vanilla online and learned all about Sacha and Vanilla for the first time.” 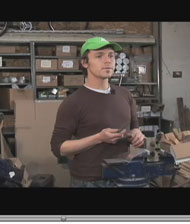 Once his documentary film class started and it was time to pick a subject for his first project, Muellner remembered that bike.

He called up the man behind Vanilla Bicycles (Sacha White), and the result is a 10 minute film just-released to the public on Muellner’s Buttered Muffin Productions website.

The film includes interviews with Sacha, his framebuilding friend Ira Ryan, and several Vanilla customers. It’s an interesting look into the man behind some of the most sought-after custom bicycle frames in the world.

Muellner says Buttered Muffin is just a hobby for now, but he’s “been bitten by the bug” and is already thinking of his next project.

He wants to make a film about another type of bicycle he loves, the bakfiets.

You can watch the Vanilla Bicycles documentary on Marko’s website.

GREAT! I hope to see something from Marko for Filmed by Bike 2008 (deadline is March 1).

Wow. Sacha’s work presented as the art it is – closest I’ll get to a Vanilla for awhile, but definitey feeds the hunger. My own bike is whimpering in the corner from envy. NOW how long will the wait list be???

Good–not enough people knows what goes into a quality cycle frame and more should know about Sacha.

I spotted a couple in matching white Vanilla bikes at Stumptown on Belmont earlier this week. Those are really stunning bikes.

Uh, how does one get the documentary to play? Every time I go to the filmmaker’s website nothing happens. Thanks.

scroll down to the movie window. it should just load automatically if you have quicktime.

It would appear that the embedded video is no longer available, perhaps he’s gone over his allowed hosting limit. Accessing the .mov directly also fails.

The new phenomena of being….