[View my photo gallery of this ride. ]

Dan Kaufman from Crank My Chain Bicycle TV was there and we put together this short video report of the ride:

Watch a short video report from the ride produced by Dan Kaufman of CrankMyChain Bicycle TV.
Click To Play

As expected, Transportation Commissioner Sam Adams, flanked by his policy analyst Roland Chlapowski and his Chief of Staff Tom Miller, made an appearance. During interviews with the various media outlets he said,

“I just think that this (the Bike Master Plan) is more important than some of the other items proposed in the Mayor’s proposed budget…It’s absolutely critical that we continue to be a leader in bike mobility and that comes by having a good plan…Bikes have never been more important to the mobility of this city. It’s an affordable way to get around; in some cases, it’s the most reliable way to get between two places; it’s good for your health; you burn fat instead of oil; and it’s good for the environment.

The Bike Master Plan allows us to develop a bike system, not just do it piecemeal, but develop a system…As transportation commissioner I have a responsibility to get people around the city safely and bikes are a key part of my strategy. I think you can argue that we don’t spend enough money on bikes, not that we need to cut back on our spending.”

After Adams’ remarks and brief words from Roger Geller, the ride began amid the chaotic cacophony of May Day Parade revelers, which passed by Terry Schrunk Plaza right as we rolled out. After a quick loop around the South Park Blocks, we made our way over the Willamette River (via the Hawthorne Bridge), up the Eastbank Esplanade, and onward through North Portland.

As we made our way to our destination (Kenton Park), we experienced a diverse array of bikeways and environments; 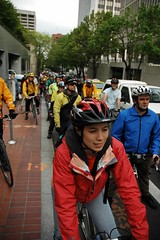 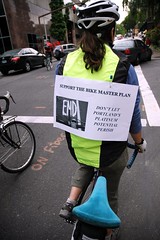 I talked to several people on the ride (unfortunately I can’t use the audio due to excessive wind noise), and they all expressed a deep concern about the Mayor’s decision to cut funding for the plan.

Dave Sohigian was there with his wife and two kids. They live in Lair Hill, just south of Portland and as a carfree family, the continued improvement of Portland’s bikeway network is very important to them. Another women I spoke to said she moved to Portland (from Ohio) in large part because of it’s bike-friendly reputation and she wants to see that continue.

Shamus Lynskey of St. Johns towed his young daughter along and said he has a vested interest in improving bikeway connections from that area to downtown. BTA volunteer Lee Hoffman lives in Tanasbourne and came out to show his support for the Master Plan.

Once at Kenton Park, we re-assembled, filled out comment forms had a Q and A session with Roger Geller. It was a constructive, informative discussion that brought up a wide range of topics; from the potential of a bike-only lane on the Hawthorne Bridge (Geller said bikes were 16% of the total trips last summer), to problems with the new bike/ped refuge island at N. Willamette and Portland.

It was inspiring to see both the large showing of support for the Bike Master Plan, and the high level of concern and engagement for improving the bikeway network.

View my photo gallery of this ride.
Browse all of my Bicycle Master Plan coverage.

Thanks to Sam Adams, who shows someone in City Hall is still in touch with reality. I think we need some new signs: “I’m a cyclist, and I vote.”

Can’t wait until Sam launches his mayoral campaign. I’m excited for all his bike and transport talk. I need to know what else he’d do for us.

I didn’t make the ride (have had a *bad* week that’s got my sanity hanging by a thread) but I’m definitely planning on making the next one. We can’t let the numbers die down. A huge swarm of cyclists riding legally to further alert the public of our presence as valid, law-abiding users of the road *AND* examination and discussion of facilities as we observe them is damned constructive stuff. It’s not just a party in protest, it’s a highly visible mobile public roundtable.

I too am a cyclist, and I also vote.

Dare I say, Sam for Mayor?

Last night’s ride was an incredible show of solidarity. I, for one, was very impressed with the whole thing. There were a couple of spots where the route was unclear (I got lost for about ten blocks just northwest of the Rose Garden, after the scramble signal), but other than that I thought it went off well.

p.s. I agree wholeheartedly with what N.I.K. said, we must continue to make this a huge ride – every month.

Applause and kudos to the PDOT folks and volunteers who helped us negotiate the crazy scene (our group, the May Day marchers and rush-hour auto traffic!) downtown. The ride was a truly positive event (sort of like Critical Mass, only with more traffic rule compliance, smiles and waving at motorists — though the guys who “corked” at intersections for us downtown made me laugh out loud in surprise). I hope it sheds some light on how important bicycles are to our multi-modal transportation offerings in Portland. Safe and efficient bicycle access is good for business, for tourism and for our city’s overall health.

That, and finding out once and for all how many bicycle advocates it takes to repair a puncture. (The answer is twelve!)

I was unable to make the ride due to a class at the same time, but caught my own little slice of bicycle pie on the ride over to PSU. For what seemed like a medical emergency, SW Broadway was closed to motorized vehicles starting at about Oak and continuing southward for about six blocks. A police officer politely waved me through the intersection, and for those six blocks I was able enjoy Broadway in its carfree entirety; no “Hotel Zone”-riddled bike lanes for me!

This is the best city with the best people! 200 riders, voters, citizens. Sorry I missed the ride (my mommy was in town); keep the energy up.

The ride was great – thanks, Roger for both leading the ride(s) and for your efforts with PDOT, thanks to the PPD for not going ballistic over 200 cyclists negotiating traffic near City Hall and in the park blocks, and thank you Sam for showing up and acknowledging those of us there to support the Plan Update. Thanks Aaron Tarfman for making signs, and to Jeff Smith, Linda, Kirsty and everyone else involved with PDOT for the work that you do and the support that you give. Thanks also to the many ride leaders who directed us around the harder to navigate areas of North Portland.

Oh, and thank you Tri-Met for corking 2 intersections downtown for us with your giant buses.

I don’t know where the truck full of police in full riot gear went yesterday, but seeing them behind us in Rose Quarter was probably my most memorable image, along with the huge wave of marchers in downtown at the start of the ride.

Ok, I lie – my most memorable moment was all the spots where roles got reversed and cars had to wait for all the cyclists to get out of their way, all because we were riding perfectly legal and obeying traffic laws.

My favorite part of the ride was getting asked “What are you protesting?” and being able to respond “Nothing. This is a PDOT ride for the Bike Master Plan . . .”

I definently will attend the ride again this next month, I had a great time. A note to all who end up coming next month; bring a little food. The ride was far longer, I understand, than the other rides have been, and we were all rather hungry by the end. A bottle of water and a power bar would have gone a long way. ^_^

I like the idea of Sam for mayor as well, and I’m interested to see how the next election goes.

I second Martha, though in fairness I should add that the promotional material all said to bring food. I guess some of us (me, for instance) didn’t believe them. 🙂

My favourite overheard line on the ride was someone explaining the Bicycle Master Plan to a bystander “It’s a way to make more of us.” Here’s a link to some of my photos of the ride: