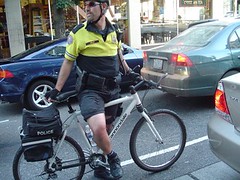 The Portland Police Bureau released their Annual Traffic Activity Summary yesterday. The report details all the traffic violations and expenditures for 2006.

Among the stats was a page devoted to “Non-permitted Protest, Demonstration, Critical Mass”. It’s important to note not only how they categorize their presence at Critical Mass, but the amount of officers and cost to the city.

In 2006, the Bureau devoted the following resources to Critical Mass:

Download this page of the report here (18 KB, GIF).

Acting Commander of the Traffic Division Mark Kruger told me on the phone this morning that the Bureau spent $23,602 patrolling Critical Mass in 2005.

As reporter earlier this month, the Traffic Division recently ceded their responsibility of Critical Mass to Southeast Precinct. In recent months, due to only a few riders showing up, the Police have not patrolled the ride at all.

As an alternative to Critical Mass, riders have started the People’s Ride. According to organizers, it’s a “mellow, family-friendly, ride that winds through a number of inner Southeast neighborhoods.” The ride meets on the last Friday of every month (that’s tomorrow!) at 5:45 in front of Palio’s (1996 SE Ladd) on Ladds Circle.

Why is it important to note how this ride is categorized? It is a protest or demonstration, and I don’t believe they obtain an official city protest permit.

That doesn’t make it illegal at all, but as far as categorization they’re right. Your implication of “take note of that” really just adds inflammatory journalistic spin.

“Your implication of “take note of that” really just adds inflammatory journalistic spin.”

I added that because I’ve heard Critical Mass participants refer to the ride as a random gathering. Veteran CM rider, Sara Stout describes is as a “planned coincidence” and “freeform”.

I think it’s important that we know the police – despite our attempts to convince them otherwise – still consider it a protest.

“Inflammatory spin” was not my intention.

I’d be curious to know what the police have spent annually on this activity in earlier years, particularly the Vera Katz years.

Sasha, are you kidding or what?

Last I checked freedom to assemble is still constitutionally protected, with no caveat requiring permission from authority. Go put your brownshirt back on.

I don’t think anyone is saying that the Critical Mass gatherings are illegal. The police like any other business or agency has to report where there money goes so they have to catagorize it some how. If not like they did then just under some other heading on a form.

One way to look at it is that if Critical Mass rides get attention on budget figures then you can be sure that ALL of the city budget planners and council members are very aware of Critical Mass which is what its partially intended to do in the first place…Raise Bicycle Awareness.

I’m not saying they think it’s illegal..I agree with Bradly that it’s probably listed like that for lack of a better place to put it.

i just think it adds to the ongoing perception within the bureau that the ride is a protest.

This would be a good thing to ask Kruger next time we talk (that is, their official stance (if there is one) on Critical Mass).

In this country, no protest or demonstration should ever require a “permit.”

Maybe they confused those two things with a parade.

No I am not kidding. You are misunderstanding me. My point was about Jon’s phrasing which I found to be dishonest. He clarified it, and I think he should have just stated his clarification straight away, as it makes sense.

Of course people are free to assemble and protest. But Government is also, for better or worse (and often worse) able to impose process on such gatherings so that they can go about their business. Such is a permit system. It’s not illegal one way or the other, but it is a means for them to determine, within their process, how (if at all) they need to respond.

This budget is direct evidence of that.

The process is the constitution. The illegality is in the government arbitrarily assuming rights and impositions not granted it.

I agree with everything you are saying, I am just amazed that your critique is of Jonathons words and with semantic quibbling, rather than the actual organized and openly subsidized suppression of dissent.

You are nit-picking over nonsense while remaining completely silent in the face of blatant and fully transparent oppression.

The founders of our country would be ashamed of us all.

Critical Mass is not illegal… As long as the participants don’t violate any laws… Who here has been on a critical mass law where no established laws were violated?

criticalmass.org says “Critical Mass is not an organization, it’s an unorganized coincidence.”

– A leaderless, spontanous bike ride through the streets of Portland (and hundreds of other cities worldwide)
– A time to ride your bike without fear through busy downtown streets
– A great way to meet other bicyclists, pass out fliers, learn about other events
– A meandering celebration of bicycling
– Something different for everyone
– Family-friendly
– A visionary projection of what our future might look like”

So, if the advertising is correct, then Critical Mass is not a protest, or a demonstration. Since it’s a random collection of people riding, it doesn’t need a permit. So, I agree – the police language infers that the Critical Mass riders are doing something illegitimate or unsavory (but not illegal). It’s biased language, it’s used dismissively and in a derogatory manner.

Then again, they can’t say “Enforcement, traffic, bicycles”, because that might look like they were selectively enforcing traffic laws.

I’ll accept that CM is “planned”, because it has a fixed date, time and starting place, but calling it a protest is a real stretch, with the exception of 1 or 2 mass rides which were “hijacked” by the participants.

Matt, did you mean for that to sound insulting, or is this a British accent thing?

Because I would describe Jonathan as “scrupulously balanced,” but not as being namby-pamby, or bland, or a kiss-ass, which is what your statement implies to me.

“Critical Mass is not illegal… As long as the participants don’t violate any laws… Who here has been on a critical mass law where no established laws were violated?”

I’ve never been on any group ride, organized or just a bunch of freinds, where no established laws were broken. (mostly running stop signs)
I’ve never driven a car on any public road or freeway, without witnessing the majority of motorists breaking established laws. (mostly speeding- am I on a soap box about that or what 🙂
Does that make biking and motoring illegal?
That’s kind of a silly argument.

No Rev, I think they stopped using motorized officers starting in about March 2005, that would be two months after Potter rode along in Jan 05.

Just to further explain the reverend’s question, the expenses of patrol car price, maintenance and gasoline are amortized over many years and hours of patrol work, so that a few hours a month of using those resources really doesn’t cost that much. Officer wages makes up the vast majority of the expense. Thus if you put officer on bicycles, but deploy the same number as you did in cars, it isn’t going to save you that much money.

This is why it is actually more expensive for the Bureau to deploy a two-officer team (and we always have two, for safety reasons) such as the one in SE, than it is to pay one officer to answer 911 calls in a patrol car.

Maybe I am missing something. If the police manpower was not needed the 20 grand could have been used for something else……like catching real criminals! How about more funding for safe routs for schools? So buy not patrolling the critical mass rides as there are not so many participating, and switching to a more family oriented ride we are saving 20,000 of taxpayers money. That’s a good thing, right?

Steve said in No.9:
The process is the constitution. The illegality is in the government arbitrarily assuming rights and impositions not granted it. … The founders of our country would be ashamed of us all.

This is what I too feel is important and right, and it’s very reassuring to read others saying it. So thanks Steve.
John

I think you’ve all missed the real point here. In other posts we want funding from the city for bicycle projects. On this post we see how much the city is forced to spend (and waste) when those involved in Critical Mass forget the ‘M’.

We want $150,000 in the budget for the master plan. That’s 8 Critical Mass rides. So you all decide what’s better for Portland and cycling’s future here.

JE, you’ve hit the nail on the head. IMHO critical mass was good in the beginning, but people in Portland know bikes belong, and critical mass is just creating tension and costing tax payers lots of cash. I bike to work, to the grocery store, and walk/ bike my kids to school. I want to get along with motorist, not torment them. Lets put a positive spin on cycling to get more people out of their cars. Even the BTA added “one more bike” to it’s t-shirts to go along with “one less car”.

You know, you can paint a pretty face on a duck as long as you want, but it’s still gonna quack.

Rhetoric doesn’t make something so, and actions always speak louder than words.

Critical Mass has an unstated political and social goal: to get more awareness for bicycling amongst the greater population. How is this not a protest?

Those engaged in critical mass and denying it is a social movement or protest are merely engaging in a semantic battle… likely for the purpose of increasing its appeal to non-massers and make it more acceptable for society in general to accept. Protesting in general in this country is generally frowned upon.

And Steve, as far as throwing up in your mouth, grow some balls, will you? Stop being naive – there is a lot of shit that happens in Portland, in Oregon, in the USA, and in the world. Chill out and deal with it. We need change, but you also need to understand how things work in the real world, or else how will you effect change?

Put your money (bike) where your mouth is already!

I found it terribly discouraging that only 5 other people in the whole city were willing to make a few minutes to represent cycling as a viable transportation option and ride in Critical Mass.

Come on friends, let’s take Critical Mass back from the police and the yahoos! This is an open (spontaneous, informal, family-friendly) invitation to everyone who reads this to come to next month’s CM and spread some LOVE.

The revolution is not over yet!

BE the change you want. (Don’t just write about it on the Internet.)