This morning I left the house in driving, cold, rain. A few hours later, I was pedaling in blue skies and California sunshine.

So far, my Tikit has been great. It only took about 20 minutes to go from baggage check to mobility, and few minutes later, I was at the San Jose Convention Center. 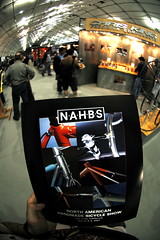 Today was opening day at the North American Handmade Bicycle Show (NAHBS) and Portland builders were out in force.

Ira brazed the brake leavers directly onto the bars. No clamps. Nice. He also integrated the thumb shifter mount. The result is a very clean, distinctive rig.

Just across from Ira was the guy he drove here with, Tony Pereira. Tony had a great day. His 1920’s cruiser-inspired mountain bike has been called a show favorite by more than one passerby.

But for me, the coolest thing in Tony’s booth is his randonneuring bike. Tony has mixed the old and new into a gorgeous combination that includes a “suicide shift” front derailleur, a carbon Campy crankset, and hand-painted pinstripes. I’ll get some close-ups of this thing tomorrow. 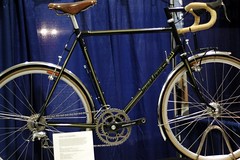 Down the aisle a ways was the Vanilla Bicycles booth. If there was a “Best in Show” prize for best booth, it would win hands down. 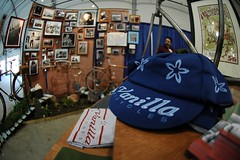 I cornered Sacha before he got too busy to ask him about his new Speedvagen model. It represents a new direction for Vanilla and I’ll share more details about the bike, and Sacha’s philosophy behind it tomorrow. Here’s a few teaser photos:

Stay tuned because here are the stories I’m working on for tomorrow:

DeSalvo….please please take a few photos of his bikes….Oregon made…Looking forward to seeing his CX S&S bike and “other” kiddie ride….take pix please…
Thanks
A

Pegoretti! Pegoretti! Don’t come back to Oregon until you’ve gone around the world.

Thanks very much Jonathan for providing quick coverage for us left back with the rain.

Jonathan,
Are you sure you are looking at the “Sycip long bike” or were you refering to the Surly Bid Dummy?

Just wondering if there are more than one version of the “long bike” out there.

There are several builders with long bikes. Sycip has one, Inglis too. And another guy who specializes in them. Very cool to see cargo getting so much attention.

I’ll try and get photos of them all.

looking forward to the cargo bike photos! Thanks again Jonathan for your excellent coverage!