[The Ben Hurt Chariot Death Match claimed many victims and
capped an epic day of competition. See all the chariot action in my photo gallery.]

Yesterday was a perfect day for Portland, but a shameful one for America: Soviet Canuckistanians ran amok over the Mini-Bike Winter Olympics field today, littering the landscape with the spokes of their opponents. 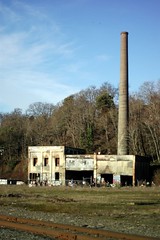 [The scene of the
Chariot Death Match.]

The only rule in the Death Match was that you couldn’t mess with the steed (the rider), and the goal was to be the last team standing.

James Brake (steed) of Vancouver and Jeff Lost (gladiator) of Abbotford on their heavily armored chariot, The Meatball, extruded their opponents into a hearty pasta of defeat, armed with a fierce combination of grappling skills, chicken feces, and disarming good sportsmanship.

Watch a mini-biker plunge into the river in the short video below (Video credit: Bump):


Also riding strong was Canadian Ifny Lachance, (pictured below, on left in third row) named a “pedal revolutionary” in a profile in this month’s issue of Momentum Magazine.

[Faces of the gladiators]

The competition was long and exciting, but good natured, and no human injuries were reported. A surprising early casualty in this match was Gabriel Amadeus’ mighty war-chariot Heraculus, which, like the ancient Greek hero Achilles, was hobbled by a well-aimed blow to a crucial tendon — in this case, the trailer hitch.

[A few scenes from the action]

[Check out all the insanity in my Chariot Death Race photo gallery.]

In general, the bigger chariots fell harder this year, fulfilling the pre-game predicitons of Zoobomb physicists.

Also falling hard were the brave competitors in the Atomic Cupcake Challenge, who tested the superfund designation of the Willamette River by riding mini-bikes into it to see if they or their bicycles would melt.

Portland police escorted, but did not attempt to apprehend, the gathered throng as they paraded to the location of last night’s awards ceremony and toga party. At The ReCyclery bike shop in SE Portland an elated crowd shook their minibike-seasoned posteriors to high-energy sets from Show Me The Pink and DJ Sysfail, and recounted the many high points of this excellent day.

Mini-Bike Winter, in its fourth year, has drawn a higher level of competition, cooperation and bike fun than ever before — and it’s only half-over!

Today (Sunday) is Greek Day, featuring the Bicycle Relay, the Blind Derby, the Figure 8 Race and more. Join us at the Hawthorne
Hostel at 11:11 for a potluck brunch, or come find us under the Hawthorne Bridge tomorrow afternoon to share the bike fun and glimpse the minibike action.

Take heart, American brothers. Although James Brake was fighting for Team Canada, he is, in fact, an American.

Here is some video

This past weekend was TOTAL INSANITY. But a GOOD insanity. There was nakedness!