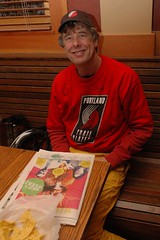 [Jeff Bernards, founder
of Get Lit]

For the last three years, Jeff Bernards and his Get Lit program have distributed over 1500 free bike lights and 500 helmets to Portland cyclists.

His program—which was initially funded by an ODOT grant—has become such a success that it has garnered national media attention, earned him an Alice B. Toeclips award, and has been emulated by the Portland Police Bureau and other advocacy groups across the country.

There’s no doubt about it; Jeff’s dedication to Get Lit has had a major impact on the cycling community.

Unfortunately, Jeff is also very busy with other projects and no longer has the time to administer the program. He contacted me in hopes of finding a capable volunteer who can take over.

This is a great opportunity for someone to get involved and help keep a vital program alive. Could this be you?

Jeff, thanks for all your hard work & persistance. You’ve made the invisible visible.

This program is really awesome and I hope to see it continue far into the future. I’m one of the lucky recipients of free lights and have been grateful ever since recieving them. I certainly appreciate the hard work, time spent and donations given that have made this program a success.