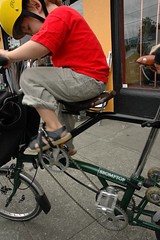 [A Brompton built
for two.]

Since neither of my girls can ride a bike on their own (yet), we’re always looking for ways to carry them. So far Juli and I have used a trailer, baby seats, backpacks, my arms and even my shoulders (just for fun).

Last week I came across two new methods that were both fun and effective.

While hanging out at Veloce Bicycles on Hawthorne, Todd Fahrner rolled in on his Brompton folder. Todd’s always up to something interesting and that day he was showing off his latest creation. Todd has converted a product called the ITChair—which adds a child seat to a Brompton—attached some cranks and made it into a nifty tandem for tots. He calls it the ITandem.

[Todd and son on their foldable, Brompton tandem conversion.]

Todd has documented his experiences with words, photos and movies on his blog. 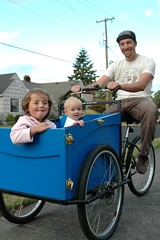 [Me and the girls on
the Haley Trike.]

I love Todd’s set-up, but what if you’re kids aren’t big enough to pedal yet and you need more cargo room? After my post last week about bakfiets I got an email from a reader inviting me to check out his cargo trike.

He had a Haley Trike, made in Philadelphia, Pennsylvania by a guy named Stephen Horcha. I plopped my girls into the cargo bin (which had a nice, hinged door) and off we went. They loved it! We tooled around the park a few times and when the ride was over they didn’t want to get out.

I’m sure Haley Trikes aren’t as snazzy and smooth as european cargo bikes (I haven’t tried one yet), but they’re much more affordable and cost less to ship. 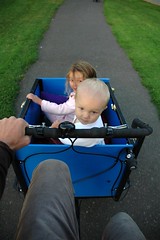 There are so many options and choices when it comes to kids and bikes that it can be overwhelming. Luckily, I recently heard from the BTA‘s Robert Ping that they’re working with Mommy and Me groups at local hospitals to educate new families about these choices. I’ll have more on that new program soon.

thanks for the link, jonathan! what grabs me most is your closing mention of that BTA educational program targeted presumably at new parents. it seems to me that parenthood is widely regarded as the ultimate reason to own a car; it’s great to hear that idea might be in question in even a hospital setting. our son was born in san francisco, in a hospital within walking distance of home. hospital policy was not to let us take him home without being strapped at five points into a new car seat: scary.

It’s good to see more information for biking with pre-cycling children. Thanks. I use a Burley Piccolo and D’Lite at the same time. At first I searched for info on any reasons not to do it but everything seemed safe enough, I’ve seen others around town, and I avoid high-volume streets, so off we go!

As a parent-to-be with cycling in the blood, what are options folks have used for infants? Specifically before they are strong enough to wear a helmt?

I think we took our kids in a bike trailer at about 6 weeks. We did exactly what Becky suggested. I strapped a carseat onto the frame of the Burley. I made sure that it was so solid that the seat would stay in place even if I rolled it over (in test only). The carseat provided the stability to protect my little ones heads (We also used one of those upside down *U*shaped head pillow things to cushion the head on either side).

Yep. We set Danica in the trailer with her car seat when she was just a few months old. I used inner-tubes to secure the seat and it worked great!

I am interested in any safety reports any one is aware of about any of these options for kids, especially the trailors that ride behind bikes. It looks scary, but I’d like to be proven wrong by some safety tests or research.

those Haley trikes look just as snazzy/smooth as our Eurotrike (a Christiania). I’ve seen them online and it looks like a really good idea, and made in the US as well.

You’re welcome to come over and try it to compare, though. We’re still waiting for our cargo . . . 🙂

I think I’m qualified to speak about this subject. Wish I would have seen the article when it was on the front page. Oh well, making good use of my sleeplessness in the wee hours of the morning.

Anyway… We have 4 children and all of them have ridden in our Burley d’Lite at varioius times in their life. –all of them started riding in it while strapped into their 5-point harness car seat before they were big enough to be held in by the ‘built-in’ harnesses. As they got older, we have graduated to more of a train set-up. (Our train was inspired by some friends in my hometown of Kalispell, Montana. The Jantz’s were featured in a newspaper article that used to be on the wall of BikeFriday/Green Gear Cycling in Eugene. They would hook up a trailer cycle and two Burley d’Lite trailers in tandem behind their tandem bike and ride up Going to the Sun Road in Glacier National Park! I have never managed to hook up the two trailers in tandem. But, we have attached a Piccolo behind our tandem with a d’Lite trailer behind that. We have ridden this train setup in the Northwest Tandem Ralley and around Portland. I hope to have a Bakfiets someday as I really enjoyed taking my kids for a test drive in Todd’s last spring. OK, I think I’ve used enough words on the blog now…

I am so glad that you are taking your girls with you on your bikes. I have been a Burley User in the past but I have gotten abuse from newsgroups (like otherwise wonderful mothering.com) about how I was ‘abusing’ my girl by taking her with me. One told me that “she loves her children too much to take them biking!” Yikes!

Do you have any updates on the Haley Trike? Especially to take kids around.