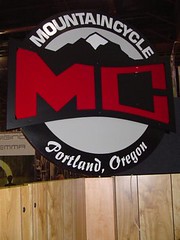 The final chapter in the long-running saga of Mountain Cycle has now been written.

Mountain Cycle was once a beloved local brand with a factory in North Portland, a presence on the local cyclocross scene and even a ‘cross bike named the Stumptown.

According to a press release I just received, the new owners have decided to set up their headquarters in Seattle Washington.

The press release says that under new management the brand is poised for a “new lease on life,” and that “the company plans to rebuild Mountain Cycle back into the innovative and rider oriented brand that it started out as back in 1988.”

It’s too bad because I thought they were well on their way to doing that right here in Portland.

I’m disappointed to see them move to Seattle. I was fairly outspoken about the whole “Stumptown” issue. I wrote a number of letters to Specialized and began “cleansing” my quiver of Specialized products.

The Stumptown issue was instrumental in evaluating my own purchasing practices.
Because I didn’t agree with the big guy pushing the little guy around.
It was during this time I made a committment to support local and sustainable companies or individuals.

Honestly this feels like a bit of a slap in the face.

I realize however that it all comes down to dollars and cents for large companies…..

Great. They’ll name their cyclocross bike Emerald City and Warner Bros. will sue them (they made Wizard of Oz). Or they’ll name a 29er the Flying Monkey and Surly will sue them cuz it’s too close to Karate Monkey.

I am still gonna boycott Specialized on principle.

Ah, who cares about mtn cycles, they didn’t make a decent commuter bike or seem interested in supporting the BTA.

I am really happy with my Mountain Cycle Stumptown commuter set up. I do not get what you are trying to say. Only good bicycle manufactures and shops are those that support the BTA? Given the current secrecy of the BTA with their negotiations with Jammin 95.5 ( bikeportland.org/2006/08/22/questions-linger-around-radio-show-saga/ ) , I do not support the BTA. But I do support local shops, manufactures and the cycling community.

It’s foolish to condemn Specialized for wanting to protect their brand. The manner in which they did so may or may not have been the best way to do so, but they have a lot invested in the Stumpjumper name. The larger a company becomes, the more responsibility they have to their stakeholders (i.e., their investors and their employees). Wanting to ensure those people are taken care of by maintaining profitability is not a crime; it’s just good business sense.

Patrick speaks of sustainability in his commentary, but I am not sure that really makes sense here because Mountain Cycle does not really appear to be sustainable at all. Nevertheless, I will continue to support Mountain Cycle as a customer so long as they continue to create cool and innovative products.

I currently own 3 Mountain Cycle bikes and I am looking for a 4th to replace my Specialized Enduro SX (hopefully with a Battery!). I love the SX, but I am also a big fan of Mountain Cycle and I would rather support them because they manage to create innovative products using a different “machine” than the likes of Specialized, Giant, and other big names.

Good luck to Mountain Cycle and I hope they update their website sooner or later.